Key solution providers are effectively leveraging smart technology, nanomedicine, and automation to accelerate diagnostic processes. Reduction in testing timeframes to provide accurate results has helped patients seek timely treatment to mitigate their cancers. The report by Fact.MR provides a taxonomy elaborating on key market segments. It also outlines visionary insights on the dynamics of the market, including the drivers, restraints, opportunities, trends, and pricing analysis, along with key success factors. Market trends have been tracked in 20+ high-growth countries.

The global cancer profiling market has experienced substantial gains during the historical period of 2016 to 2020. According to Fact.MR, the market surpassed US$ 900 million revenue in 2018, expanding at an annual growth rate of 4%. Absolute opportunity worth US$ 36 million was generated in 2019.

Cancer has emerged as one of the leading causes of death, and a significant impediment to growing life expectancy. The World Health Organization, in 2019, pegged it as amongst the leading causes of fatalities among people below 70 years of age. As per estimates by GLOBOCAN 2020, approximately 19.3 million new cancer cases and nearly 10 million deaths occurred in the previous year.

Female breast cancer surpassed lung cancer, recording 2.3 million new cases (12%), followed by colorectal cancer (10%), prostate (7.3%), and stomach (5.6%). Thus, it can be concluded that, the global burden of cancer incidence and mortality has surged, and will continue to increase in the long run. Thus, governments across the world are investing in extensive cancer eradication programs.

As per the American Cancer Statistics' estimates, by 2040, global burden is expected to increase to 27.5 million afflictions, with over 16 million expected fatalities. Consequently, advancements have been seen in oncology care, with demand for personalized medicine experiencing a massive incline. Hence, cancer profiling is gaining traction, with specific gene mutation identification and targeted therapies receiving credible nudge.

What Scope Do Technological Advancements Have in Furthering Cancer Profiling?

A major breakthrough observed in this regard is the advent of nanomedicine. In the conventional sense, nanomedicines are used to modulate biodistribution and target site accumulation of systemically administered chemotherapy drugs to strike a balance between efficacy and toxicity. Starting 2015, the US Food & Drug Administration approved Onyvide and Vyxeos, some of the first anticancer nanomedicines.

Prominent cancer profiling market players are expected to effectively leverage smart sciences to dole out advanced equipment in the future. Boehringer Ingelheim, for instance, currently offers an in-class SOS1::KRAS inhibitor BI 1701963. This is a protein-protein inhibitor that binds to the Son of sevenless homolog 1 (SOS1), one of the guanine nucleotide exchange factors switching the KRAS gene into an ‘on’ state to single cell proliferation leading to cancerous growth. In 2019, BioGenex released the NanoMtrx® 300, a compact 30-slide bench-top fully automated pathology workstation for immunohistochemistry (IHC) and in situ hybridization (ISH).

In the latter case, researchers are investigating possible approaches to treat non-small cell lung cancers (NSCLC) with the introduction of new drugs for treating NSCLC associated with EGFR and HER2 exon 20 insertions or mutations.

How is Lower Ceiling on Predictive Biomarkers Identification Restraining Growth?

As genomic instability and acquisition of mutations are the hallmarks of cancer, tumor heterogeneity continues to pose challenges for the identification, testing, and development of cancer biomarkers. These challenges are prevalent across the drug development landscape, wherein, their implementation in clinical drug trials is advancing at a staggering pace.

For these reasons, the landscape of cancer therapy seeks potential strategies for the development of robust biomarkers that complements the evolving cancer alterations, thereby enabling efficient tumor biopsies using cancer profiling. While the ongoing cancer therapeutic scenario is lagging behind in biomarker development, considerable investments are in pipeline, and their outcome is expected to aid in the progress of cancer profiling landscape in the future. 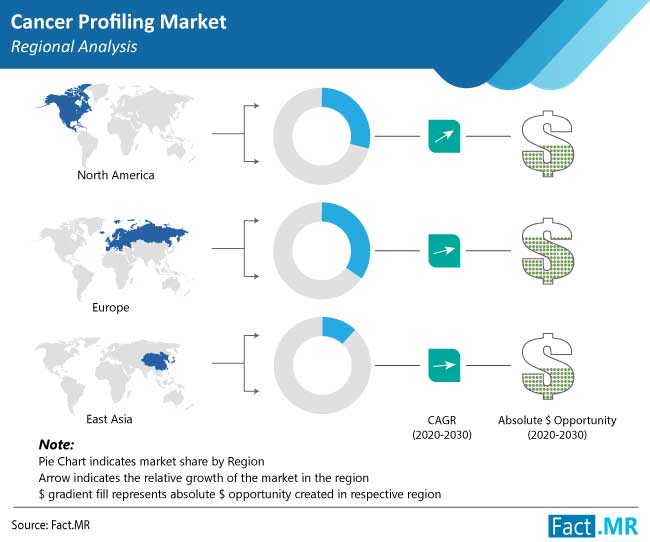 How Lucrative is the U.S. Cancer Profiling Market?

The United States is expected to garner significant share in the cancer profiling landscape. A study conducted by the American Cancer Society projects a substantial increase in the incidence of numerous cancers across the country in 2021. It estimates that, over 1.8 million people are expected to suffer from some or the other malignancy, with over 600 thousand deaths. Therefore, government initiatives have been undertaken to contain the spread of this debilitating disease. These include launching awareness campaigns and promoting highly advanced cancer profiling and detection research.

The National Cancer Institute has been playing a pivotal in advancing sophisticated cancer research studies and initiatives, including on cancer biology, cancer genomics, and cancer prevention. At present, the agency is working on determining the efficacy of patient derived xenograft (PDX) mice-based clinical trials. These mice largely retain the genetics of human tumors from which they were initially created. This is expected to reassure clinicians about the validity of novel cancer treatment and detection studies and approaches.

Will Biological Research Programs Drive Demand for Cancer Profiling in the U.K.?

Results yielded until now have been variable, as certain cancer cells are efficient at producing their own serine, especially amongst patients with KRAS mutations. Fortunately, researchers are hopeful of obtaining a standardized conclusion through subsequent studies, thereby heightening prospects for deployment various cancer profiling approaches in the long-run.

The U.K. market is characterized by the presence of various oncology diagnosis providers such as GE Healthcare. The company offers highly advanced mammography solutions, including the Senographe PristinaTM Contrast Mammography, the Senographe Crystal NovaTM digital mammography transformation, and the SenoBrightTM HD. Moreover, players are leveraging AI-enabled solutions, such as Ibex Medical Analytics who unveiled its Galen Prostate platform in June 2020.

Why are Cancer Profiling Players Increasing Penetration across Germany?

According to Globocan 2020, total number of prevalent cancer cases across Germany amounted to over 2 million in the last five years, with over 600 thousand new cases and 252 thousand fatalities. Heavy smoking and binge drinking are attributed as key culprits behind the rising prevalence of cancer across the country.

According to the European Commission’s report, nearly one in five adults reported smoking every day in 2017, with over one-fifth of men and nearly a sixth of women reporting daily tobacco consumption. Consequently, prevalence of lung cancer has increased, with fatality rates comprising nearly 40% of the country’s population. As a result, the scope for cancer diagnosis and treatment has increased in recent years.

How are Manufacturers Likely to Benefit from the Indian Market for Cancer Profiling?

On an average, approximately 15% of diagnosed cancer patients opt for treatment, with the rest of them remaining ignored. This disturbing trend has alerted the government, which is accelerating national level initiatives to prevent unwanted fatalities. International level collaborations are also helping bolster advanced cancer research.

In 2018, the Indian government signed a MoU with the U.K. to initiate a bilateral level cancer research initiative. The collaboration has successfully brought together medical practitioners on a single platform to address research challenges attributed to affordability, prevention, and care by improving progress against cancer outcomes. Such efforts are attracting cancer profiling manufacturers across the country.

In terms of indication, profiling for lung cancer, including non-small cell lung cancer (NSCLC), is likely to receive major tailwinds, attributed to increased prevalence across all regions. According to a paper published in the National Center for Biotechnology Information in 2019, novel, highly sensitive blood-based assays to test cfDNA and ctDNA at very low concentrations for genomic abnormalities have been developed.

Moreover, in recent times, methylation of ctDNA has emerged as a potential lung cancer diagnostic and screening testing tool. A major advantage of this testing is its remarkable stability as compared to other potential biomarkers. Furthermore, DNA methylation alteration detection happens at during early carcinogenesis, enabling clinicians to take appropriate steps to prevent further lung cancer spread.

Why is Next Generation Sequencing Highly Sought-after?

As NGS can assess multiple gains in a single assay, it eliminates the need to order multiple tests to identify the causative mutation. Furthermore, NGS testing enables mutation detections at as little as 5% of the DNA isolated from a tumor sample. This approach is expected to find applications across major types of cancers, including NSCLC, liver cancer, and breast cancer, among others.

These aforementioned players rely on a variety of organic and inorganic growth strategies to cement their market presence. Offering new products, forging strategic alliances, acquisitions and mergers with other players, and conducting clinical trials for determining drug efficacy are a few examples.

The global market is expected to witness credible gains through 2031, primarily driven by burgeoning research in advancing precision-based treatment and incorporation of technological advancements

According to Fact.MR, suppliers and manufacturers are increasingly targeting emerging economies across Asia Pacific. Maximum growth opportunities are visible across India, as it possesses the world’s largest population base.

Testing for detecting possible cases of non-small cell lung cancer (NSCLC) is acquiring momentum, as the prevalence rate is expected to compound over the coming years. Various respiratory disorders arising out of sedentary habits such as smoking are le

*211 figures and 46 tables includes by FactMR