Primary hip reconstruction is a clinical intervention where a primary joint replacement procedure is carried out on the specific injured joint of the patient. A damaged or worn-out hip joint is replaced using implants made of metal, high-density polyethylene, or ceramic during a primary hip replacement surgery.

Hip arthroplasty has become a common operation due to the high prevalence of hip disease and the widespread success of hip replacement surgeries. The hip prosthesis can be simply categorized into unipolar, bipolar, and complete arthroplasties.

Global demand for partial hip reconstruction devices is predicted to evolve at a CAGR of 3% during the next 10 years. An orthopedic operation called a partial hip replacement or hip hemiarthroplasty involves removing and replacing the femoral head to cure certain femoral neck fractures.

Similar to a total hip replacement, the femoral stem is placed and can either be cemented or not. If the acetabulum is still in good shape, there is no interference made. In a hospital or surgical facility, the majority of partial hip replacement procedures can be performed within an hour.

A hip replacement, also known as hip arthroplasty is a surgical treatment to treat severe hip pain or injuries. Through surgery, artificial implants are used to replace some of the hip joints. A ball (located at the head of the femur, popularly called the thigh bone), and a socket, (make up the hip joint/hip bone). Either one or both components may be replaced during hip replacement surgery. The treatment aims to lessen the patient's pain enough to resume everyday activities and exercise.

The prevalence of osteoarthritis is increasing rapidly across the world. Hip arthroplasty is performed to treat osteoarthritis. The rapidly increasing rate of the ageing population, strong government assistance, favourable pricing trends, and improved patient understanding of replacement surgeries are all boosting sales of hip replacement devices.

Which New Developments are Boosting the Demand for Hip Reconstruction Devices?

The use of technologically advanced hip replacement tools for patients who undergo hip surgeries is one of the major trends driving the growth of the hip reconstruction devices market. In recent years, people have begun turning to digital tools and online services to learn more about particular ailments. One such area is joint replacement, where various online applications have been introduced to assist patients during surgeries, facilitate communication with orthopedic physicians, and provide post-surgery info.

Various initiatives are being quickly scaled up by healthcare organizations, and it is predicted that potential opportunities in the hip reconstruction devices market will be generated due to increasing consumer knowledge of online resources and computer-assisted surgeries.

Global demand for hip implants is increasing as a result of adequate health coverage and changes to the health reimbursement policies for joint replacement surgeries. The respective governments of several nations have introduced various health reimbursement programs for joint replacement surgeries to offer everyone access to inexpensive and high-quality care. This is positively influencing the demand for orthopedic implants.

The demand for orthopedic replacement devices is rising with the increasing need for specially designed implants for both men and women. The sizes of implants vary since each patient's anatomy is different. For patient-specific implants, several manufacturers are putting their attention on 3D printing technologies.

An enormous increase in custom implants was brought about by the adoption of 3D printing technologies in the production of orthopedic devices. The hip reconstruction devices market is projected to benefit from the numerous orthopedic firms creating cutting-edge technologies that can be leveraged to produce technologically advanced replacement prostheses.

“Increasing Senior Population across the World”

According to a WHO report,

With this seeming rise in the population of elderly people, the healthcare sector is thriving, especially in industrialized nations, and hip replacement is one field that is doing particularly well.

Senior people are more prone to hip fractures due to several orthopedic and trauma problems, this increases the rate of hip construction surgeries and demand for hip surgical devices. Thus all the above aspects are showing positive growth in the sales of hip reconstruction devices.

Why is Hip Reconstruction Device Sales Growth Being Hampered?

“Product Recalls and Several Side Effects”

The incidence of hip reconstruction surgeries is increasing rapidly. However, the risks associated with implant use are a significant issue that may limit the sales of joint reconstruction devices in the coming years. According to several claims, patients had severe side effects as a result of the device’s flaws. Allergies, metal poisoning, infections, and bone resorption are among the linked adverse effects.

Major companies in the hip reconstruction market such as Zimmer Biomet have been subject to numerous individual and class action lawsuits, due to the failure of their orthopedic replacement devices. There were around 2,000 Stryker replacement cases in state and federal courts in the U.S. as of August 2019.

Additionally, it is predicted that sales growth over the coming years would be hampered by the large product recalls of hip and knee replacement devices for major manufacturers worldwide. 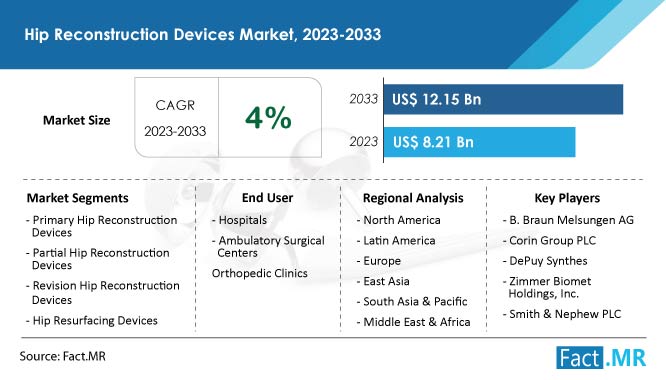 What Allows the U.S. to Be a Dominant Market for Hip Reconstruction Devices?

The United States is currently dominating the North American hip reconstruction devices market. This dominance can be attributed to the factors such as the rising rate of the senior population in the nation, the high prevalence of hip fractures and arthritis, and the presence of well-established healthcare infrastructure and key market players.

Which European Countries are Leading Markets for Hip Reconstruction Devices?

The Europe hip reconstruction devices market is being fuelled by the rising rate of patients living from osteoarthritis and other bone problems as well as strategic moves made by major industry players, such as mergers and acquisitions, in the region. The sales growth is also anticipated to be aided by the increasing use of technologically advanced tools, product type diversification, and standard regulatory approvals for surgical products.

Demand for hip reconstruction devices in Germany is predicted to expand at a CAGR of 2.5% from 2023 to 2033. The rising cases of hip injuries and growing demand for customized implants are driving sales growth in the nation.

What is Driving the Sales of Hip Reconstruction Devices in China & Japan?

The Asia Pacific market is predicted to expand at the fastest rate throughout the projection period. Improvements in bone scan diagnoses for detecting bone density among laboratory testing, greater reimbursements by commercial and governmental organizations, and the rapidly growing healthcare infrastructure are boosting sales of orthopedic implants.

It is projected that such actions with better product standards and adherence to safety regulations in respective nations are boosting the sales of orthopedic devices.

Which Material Type Implant is Most Widely Preferred?

As the least expensive and most durable/long-lasting implant material type, metal-on-polythene, also known as metal-on-plastic material, is currently dominating the sales growth. Because it lessens the likelihood of metal breaking, this kind of implant is also referred to as the safest compared to others. Currently, scientists are attempting to make them even more resilient, encouraging product demand.

The ceramic-on-polyethylene material type is anticipated to have substantial growth during the projection period due to its popularity as one of the implants used in ceramic hip replacement procedures. The older ceramic models were susceptible to simple cracking. However, the recently introduced advanced ceramic implant models are significantly more durable and do not break as easily; they go through rigorous quality control testing.

Global leaders in terms of market revenue are Zimmer Biomet, DePuy Synthes, and Stryker Corporation. Zimmer Biomet holds the largest market share due to increasing sales of its hip implants. On the other side, DePuy Synthes and Stryker are in the top positions as a result of their strong sales forces, superior local supply capabilities, and attention to both organic and inorganic growth strategies.

The global hip reconstruction devices market is valued at US$ 8.21 billion in 2023.

Worldwide sales of hip reconstruction devices are expected to increase at a CAGR of 4% from 2023 to 2033.

Demand for hip reconstruction devices is projected to reach a market valuation of US$ 12.15 billion by the year 2033.