Globally, owing to increased airport infrastructure development, capacity building, and modernization at airports, demand for hydrant dispensers is expected to witness steady growth over the forecast period. In order to minimize aircraft turnaround time, hydrant dispenser units have been extremely important in both, commercial and military aviation. Fact.MR, in its latest research report, offers insights on key factors expected to fuel demand over the coming years.

This edition (2021-2031) brings readers up-to-date with key market developments, providing analysis on how manufacturers and other stakeholders are reacting to change. The study also expands on the previous competitive landscape section, and readers will get to know the key strategies of established players as well as new entrants.

Growing number of air passengers around the world and high frequency of flights are driving demand for larger fleets and more reliable fueling facilities in the commercial sector. Over the forecast period, airport infrastructure of developed and matured economies is likely to contribute to substantial demand for aviation fuel hydrant dispensers.

On the other hand, military aviation acts as a fueling factor for the market, which allows for effective and fast deployment of aircraft in emergency situations. Over the forecast period, demand for ready-to-deploy equipment that improves operating capability is expected to drive market development.

The global hydrant dispensers market is expected to expand at a CAGR of more than 5 percent over the forecast period, due to the factors listed above.

Why are Hydrant Dispensers Efficient for Aviation Fueling?

Conventional methods of fueling through fuel trucks are associated with frequent truck movement between aircraft and fuel storage tanks. This results in increased time and fuel consumption. Also, these trucks carry limited amount of fuel at the back, which results in low speed hauling and limited supply.

Also, due to their large size, these trucks are parked away from the main action sites. On other hand, airport hydrant dispensers are small in size and specific in nature. These units can be deployed fast and swiftly on ground. Hydrant infrastructure at airports ensures continues flow and availability of fuel.

Varied options of hydrant dispensers are offered by manufacturers for end-use customers. GPMs offered in product are according to the size of the aircraft and fuel capacity. Versatility of towable and self-propelled hydrant dispensers allows customers to choose the units that best suit their needs and operating conditions. 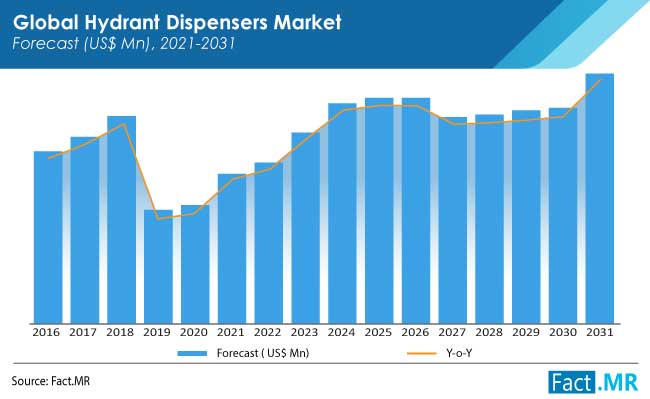 What Size Airports Can Opt for Hydrant Dispensing Technology?

As per the study conducted, there are two main factors identified that can be used as indicators for constructing fuel hydrant systems and deployment of hydrant dispensers. Though these are not binding and various other factors can be kept into consideration by airports.

The first factor could be aircraft movement per year from the airport or aircraft frequency. This can be considered, as high frequency enables the requirement of fast-refueling so that aircraft turnaround time can be minimized.

The other factor that can be taken into consideration is the fuel uplift at a particular airport. Airports that deal with huge amounts of fuel uplift require hydrant systems and hydrant dispensers.

These two factors are likely to significantly impact demand for hydrant dispensers over the coming years. 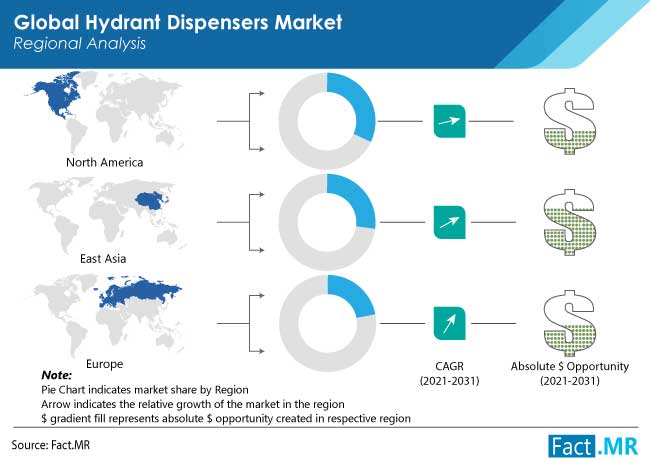 Why is the U.S. an Important Market for Hydrant Dispensers?

The U.S. market for hydrant dispensers is projected to rise at a robust rate of around 4 percent CAGR through 2031. Rich heritage of the country in technological research & development has provided a great advantage to its market.

The United States holds a big share of large- and medium-size airports. Number of busiest airports as per flight frequency and air passenger traffic is the highest in the country. This lays the opportunity for fast and efficient fueling infrastructure. Similarly, the country operates the largest number of military aircraft, which, in turn, is driving demand for hydrant dispensers and aviation refueling equipment from this sector.

Why is China a Huge Potential Market for Hydrant Dispensers?

Demand for aviation hydrant dispensers in China is expected to rise at an unprecedented rate over the forecast period. China, known as the “factory of the world”, is likely to gain growth over prominent developed regions due to increasing airport infrastructure development in the country in order to cater to its booming aviation sector. Increasing middle-class families and rising disposable income are fueling demand for air travel.

Military spending along with these mentioned factors are all contributing to the country's growing aviation industry, which is paving the way for hydrant dispenser suppliers.

Over the forecast period, India’s market for hydrant dispensers is expected to expand at a blistering rate of over 6 percent CAGR. In order to achieve greater connectivity throughout its varying topography, the country has experienced magnificent development in its airport infrastructure during the last decade. In turn, this has improved its logistical and trade capabilities. On similar grounds, the country is investing heavily in improving its airpower capabilities in order to counter its adversaries.

In addition, existing airports across the country are seeing capacity expansion in order to fulfil growing air passenger demand. Furthermore, government policies such as Make in India and Aatmnirbhar Bharat have led to rising demand for manufacturing setups within the country, resulting in rising hydrant dispenser sales.

Hydrant dispensers of 450 GPM – 850 GPM are likely to witness high demand. This expansion is aided by the widespread use of this technology in both, commercial and military aircraft. Furthermore, due to their wide spread use in both, narrow- and wide-body aircraft in the aviation sector, the segment is expected to gain good momentum over the coming years.

Electrically powered hydrant dispensers are presumed to witness exponential growth over the forecast period. Currently, prominent countries are deploying their knowledge pool and resources to achieve global net zero emissions. This is likely to bolster demand for hydrant dispensers across these regions. Owing to their clean energy benefits and lower maintenance, electric hydrant dispensers have gained immense prominence.

How are IC Engine-powered Hydrant Dispensers performing in the Market?

Targeted acquisitions and strategic partnerships with airlines are contributing to the growth of manufacturers. Less polluting units is what key players are aiming to manufacture in order to grab a greater chunk of the market share.

A recent study by Fact.MR on the hydrant dispensers market offers a 10-year forecast for 2021 to 2031. The study analyses crucial trends that are currently determining the growth of the market. This report explicates on vital dynamics, such as the drivers, restraints, and opportunities for key market players along with key stakeholders as well as emerging players associated with the hydrant dispensers.

The study also provides the dynamics that are responsible for influencing the future status of the market over the forecast period. A detailed assessment of the value chain analysis, business execution, and supply chain analysis across regional markets has been covered in the report.

A list of prominent companies manufacturing hydrant dispensers, along with their product portfolios, enhances the reliability of this comprehensive research study.

The study offers a comprehensive analysis on diverse features, including demand, product developments, revenue generation and service offerings in the market across the globe.

A comprehensive estimate on the market has been provided through an optimistic scenario as well as a conservative scenario, taking into account the sales of hydrant dispensers during the forecast period. Price point comparison by region with global average price is also considered in the study.

The market has been analysed for each market segment in terms of value (US$ Mn).

Market estimates at global and regional levels are available in terms of “US$ Mn”. A Y-o-Y growth contrast on prominent market segments, along with market attractiveness evaluation, has been incorporated in the report. Furthermore, absolute dollar opportunity analysis of all the segments adds prominence to the report. Absolute dollar opportunity plays a crucial role in assessing the level of opportunity that a service provider can look to achieve along with identifying potential resources, considering the sales perspective in the global hydrant dispensers market.

Country-specific valuation on demand for hydrant dispensers has been offered for each regional market, along with market scope estimates and forecasts, price index, and impact analysis of the dynamics of prominence in regions and countries. For all regional markets, Y-o-Y growth estimates have also been incorporated in the report.

Detailed breakup in terms of value and volume for emerging countries has also been included in the report.

The report sheds light on leading manufacturers of hydrant dispensers, along with their detailed profiles. Essential and up-to-date data related to market performers who are principally engaged in providing of hydrant dispensers has been brought with the help of a detailed dashboard view. Market share analysis and comparison of prominent players provided in the report permits report readers to take pre-emptive steps in advancing their businesses.

Fact.MR projects the market to register a CAGR worth over 5% across the 2021-2031 assessment period. Surging air passenger traffic along with heightening demand for swift fuel dispensing is propelling market expansion.

Which is the most prominent growth region?

As per Fact.MR’s projections, China is likely to gain a leap in the market, attributed to heavy investments in modern airport infrastructure. Growing number of air passengers is further aiding market growth.

Which technological breakthrough dominates the market?

Compact and modular hydrant dispensers have gained popularity in recent times. There has been increase in the development of efficient and less polluting engines. Electrically powered hydrant dispensers are where companies are involved in rigorous R&D.

Which players are prevalent in this industry?