As per Fact.MR - a market research and competitive intelligence provider, the global market for medical oxygen systems was valued at US$ 1.4 Bn in 2018, and is anticipated to expand at a CAGR of 7% to top US$ 5 Bn by 2031.

Growing healthcare expenditure, better medical facilities, and rapid technological advancements have helped increase the demand for medical oxygen systems worldwide. Elderly people have a less pulmonary reserve and reduced cough strength due to anatomic changes and muscle loss. Hence, they are at a high risk of developing lung disorders and various breathing problems. This has further led to increased demand for medical oxygen systems over the last few years.

Demand for medical oxygen systems has been directly impacted by the COVID-19 outbreak, which is a resultant of a significant shortage of medical ventilators globally. To overcome this shortage, biomedical engineers and scientists have developed makeshift devices to mimic the basic functionality of ventilators using existing devices such as oxygen concentrators, anaesthesia machines, and manual resuscitators.

Furthermore, the U.S. FDA has allowed the usage of these oxygen concentrators under the Emergency Use Authorization scheme, which will significantly increase demand for medical oxygen systems over the coming quarters.

As most of the critical cases of Covid-19 require some form of artificial ventilation, demand for wall-mounted oxygen concentrators, and piped/canned oxygen is witnessing a significant rise. The same is evident in the recent movements undertaken by market participants.

For instance, Linde, one of the largest medical gas companies, is rapidly increasing its oxygen production. The company is also working closely with providers across the globe to anticipate rising demand and ramp up deliveries.

On account of these factors, demand for medical oxygen systems is expected to surge further over the assessment period.

What are the Lucrative Opportunities on Offer for Medical Oxygen System Manufactures?

Medical oxygen systems such as oxygen concentrators and compressed oxygen cylinder are majorly used in homecare settings, and are mostly preferred by elderly patients who have difficulty in mobility, and depend on a reliable oxygen supply.

Some common chronic medical conditions such as chronic obstructive pulmonary disease (COPD), chronic bronchitis, emphysema, a common long-term effect of smoking requires oxygen therapy or supplemental oxygen in order to get the enough oxygen. Various types of oxygen systems are used to delivered the controlled amount of oxygen to the patients.

Also, due to the current pandemic, there has been a rapid surge in the requirement of medical oxygen systems worldwide. This escalation in demand is expected to continue over the coming years, as such creating revenue opportunities for manufacturers.

What are the Restraints being Encountered by Medical Oxygen System Providers?

Many of these oxygen systems are battery-operated and require constant battery changes, further rising the operational cost of these systems.

Due to these factors, there is still hesitance among consumers for using these medical oxygen systems.

North America accounted for the largest revenue share of 33%. Growing geriatric population in the region is one of the significant factors contributing to market growth.

This demographic is prone to various respiratory disorders due to weaker immune system and low oxygen intake capacity. Furthermore, government initiatives such as the authorized use of portable oxygen concentrators during air travel by the Federal Aviation Administration (FAA) and increasing prevalence of severe chronic obstructive pulmonary disorder due to unhealthy lifestyles are contributing to the regional market growth.

Asia Pacific is anticipated to be the most lucrative market during the forecast period. Key factors fuelling regional market growth include rapidly increasing geriatric population and prevalence of lung disorders. Living and health standards have increased significantly in the more developed economies of the region.

Increase in life expectancy, healthcare expenditure, and awareness regarding available technologies are some of the factors expected to contribute to regional market growth over the assessment period. 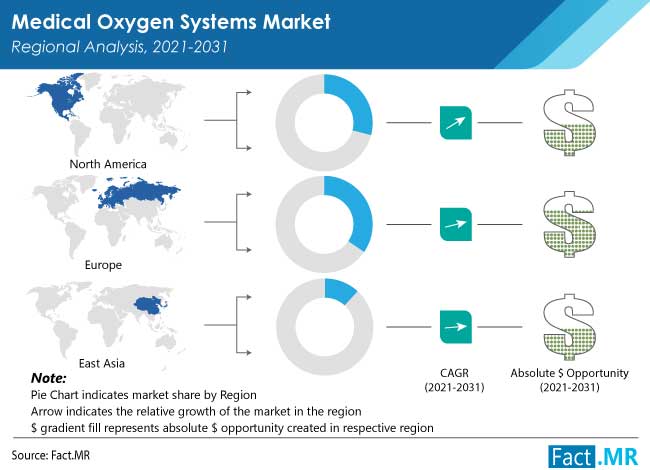 What is the Demand Outlook for Medical Oxygen Systems in the U.S.?

Demand value for medical oxygen systems in the U.S was estimated at US$ 711 Mn in 2020.

Increasing number of initiatives to promote awareness of lung diseases as well as the importance of oxygen generators are contributing to the growth of the market. For instance, the American Lung Association works to create awareness of COPD and increase federal funding for research & development.

The National Institute of Health sponsors a nationwide awareness campaign "Learn More, Breathe Better", which encourages the population over the age of 45 years who are at risk of experiencing symptoms of COPD to have a diagnostic breathing test, and consult medical professionals for treatment options.

Also, the sudden outbreak of COVID-19 has increased the demand for respiratory care products. Low blood oxygen level is one of the effects of COVID-19, and patients require oxygen support for recovery.

Additionally, the U.S. Food and Drug Administration has allowed the usage of oxygen generators under the Emergency Use Authorization scheme. This, in turn, is estimated to drive the market for medical oxygen systems in the country.

What are the Market Insights for Medical Oxygen Systems in India?

Additionally, growing prevalence of various respiratory disorders such as COPD, asthma, and lung cancer, among others, is further expected to surge growth of the market over the coming years.

Additionally, advancements in these systems such as long battery life, miniaturization, and integration of membrane technology is further expected to drive the growth of market in the country.

Why Has Demand for Compressed Oxygen Cylinders Surged Over the Past Years?

Also, on account of the ongoing COVID-19 pandemic, rising number of cases worldwide has essentially accelerated demand for compressed oxygen cylinders for intensive care as well as home care, thus, causing a sudden upsurge in the demand for the same.

What Has Caused a Sudden Upsurge in Demand for Oxygen Concentrators?

An oxygen concentrator is a medical device used to supply oxygen to patients suffering from respiratory problems. They are capable of suppling around 95% pure oxygen to patients through oxygen masks. These devices are easy to carry and lightweight during travelling. Patients can easily do their regular activities, which makes them lead a free lifestyle.

User-friendly properties of oxygen concentrators have made them highly preferred by patients across the world.

The medical oxygen systems market is highly fragmented due to the presence of a number of large, small, and local players. Companies are significantly increasing their manufacturing capacities and training efforts to meet the rising demand for these concentrators and cylinders.

ResMed, Invacare Corporation and CAIRE, Inc. are some of the leading companies in the market that are poised to witness significant growth in the next quarters owing to their large portfolio of respiratory devices.

What is the global market worth of medical oxygen systems?

The global medical oxygen systems market topped US$ 3 Bn in 2020 and is expected to reach a valuation of over US$ 5 Bn by 2031.

What are the key factors driving demand for medical oxygen systems?

Key factors driving demand for medical oxygen systems include increasing product launches for homecare settings and hospitals along with the ongoing COVID-19 pandemic.

Who are the top players providing medical oxygen systems?

Which region will largely contribute to revenue growth of medical oxygen system suppliers?

Which is the the demand analysis for self-care medical devices in the U.S.?

Demand for medical oxygen systems in the U.S was estimated at US$ 711 Mn in 2020, and is expected to surge over the coming years.

What are the factors driving demand for medical oxygen systems in India?

What is the global demand outlook for compressed oxygen cylinders?