Europe is expected to lead the global market for milk fat globule membrane (MFGM) ingredients and account for 30.3% market share by the end of 2032.

MFGM is a membrane that encases milk fat globules in the mammary glands that are shown to have high nutritional value. They are made of droplets of fat consisting of immense bioactive components, which helps maintain a prominent position in the food & beverage market due to the various health advantages that they provide to infants as well as adults over other supplements.

Awareness of MFGM benefits for infants among expecting mothers is on the rise. Easy access to information pertaining to this on the Internet will contribute favorably to the rising awareness of MFGM ingredients over the coming years.

Increase in the elderly population who suffer from lower muscle strength and agility also plays a major role in developing products that include MFGM as an ingredient, which will also positively influence the growth in the market.

Fact.MR suggests that the global milk fat globule membrane ingredients market will reach a valuation of US$ 234.4 million by 2032-end.

According to Fact.MR, a market research and competitive intelligence provider, the market for MFGM ingredients is projected to exhibit high growth at 9.3% CAGR between 2022 and 2032. 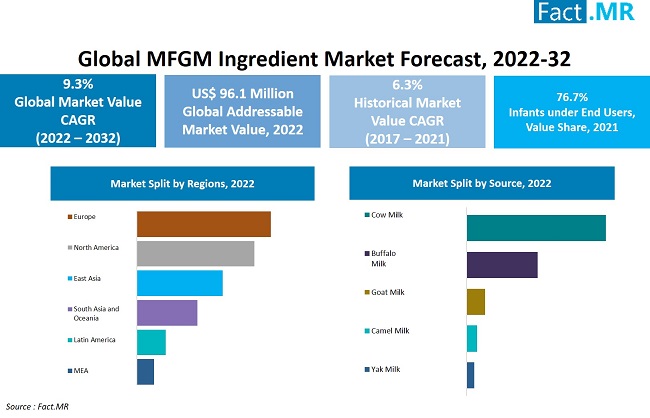 Market share analysis of MFGM based on source and region. Under the source segment, cow milk dominates with 56.5 % market share in 2022.

Why is Demand for MFGM Ingredients Rising at a Fast Pace?

MFGM is a milk constitute that is composed of phospholipids and proteins that have a wide range of nutritional and health benefits. According to a study, evidence has been proposed that MFGM has a favorable effect on infants for brain development, intestinal integrity & gut microbiota, enhancing immune system towards various infectious diseases, etc.

It is also observed that the consumption of MFGM supplements has a wholesome effect on the elderly with respect to muscle strength and agility, improving various skin conditions, and controlling hypercholesterolemia, obesity, & inflammation.

These health issues can be treated with proper intake of MFGM. All in all, these health benefits contribute to the milk fat globule membrane ingredients industry's growth prospects and are creating ample opportunities for additional revenue generation.

“Growth in Geriatric Population to Drive Sales of MFGM Ingredients”

According to The United Nations (UN), over the coming years, the global number of older adults is projected to more than double, reaching 1.52 billion individuals by 2050. Almost 8.45% of people are aged 65 and over. This percentage is estimated to increase to nearly 16% of the world’s population by 2050.

Various health challenges and chronic diseases are associated with this elderly population due to the natural effects of ageing and increased intake of supplements. Several studies have concluded that regular exercises and consumption of MFGM were found to improve physical performance in the elderly population.

Owing to this reason, rise in the elderly population is directly proportional to the consumption of milk fat globule membrane supplements, which will maintain the growth trajectory of MFGM ingredient sales.

What Can Dent Market Expansion to Some Extent?

With recent technological advancements and growing awareness about the consumption of MFGM for infant nutrition among pregnant women and mothers, key manufacturers are developing products that include MFGM as an ingredient.

The cost of production increases due to the usage of expensive machinery as well as the procurement of raw materials. In addition to various techniques involved in the isolation of milk fat globule membranes from the source material, investing in research and development for the production of new products adds to the expenses of manufacturers.

These factors have a direct impact on the final price of the product, which makes them unaffordable for many end users. As such, this acts as a restraining factor for MFGM ingredients market expansion.

The United States MFGM ingredients market is expected to reach US$ 68 million by 2032.

Every year, more than three-quarters of Americans consume nutritional supplements, which play a major role in their overall health and wellness. A majority of the United States population consists of infants and the elderly who are recommended a supplement for cognitive development, prevention of infections, and improving gut barrier integrity.

Owing to this reason, inclusion of MFGM as an ingredient in various nutritional supplements is likely to create lucrative opportunities for MFGM ingredient manufacturers in the country.

Why is the China MFGM Ingredients Market Expected to Be Highly Lucrative?

The China MFGM ingredients market share increased to 71.4% in the regional market by the end of 2021.

According to Chinese health authorities, China has the lowest rates of breastfeeding - only 28%. Breastfeeding is low in China due to hectic lifestyles among working mothers, long working hours, and short maternity leaves post-delivery. Hence, mothers and mothers-to-be are shifting towards supplements that provide the same nutrition that breast milk provides to their infants.

Due to the growing awareness and regular surveys being introduced by key players in China, MFGM ingredients have gained a lot of popularity among the target population. Advancements in manufacturing processes by key players are anticipated to boost the market even further.

The China market for MFGM ingredients is currently valued at US$ 13.2 million.

Which are the Most Popular Sources for Extraction of MFGM Ingredients?

MFGM is isolated from various sources, out of which, bovine milk shares similarities with human milk. The phospholipid level and protein compositions of bovine milk are mostly comparable, thus making it an ideal MFGM ingredient source.

Owing to the several health-promoting factors of MFGM extracted from bovine milk, such as anti-carcinogenic, antimicrobial, anti-inflammatory, and anti-cholesterolemic, key players are using cow and buffalo milk that come under the category of bovine for the production of MFGM ingredients.

Thus, the combined use of cow and buffalo as a source for MFGM production has increased steadily in recent years, reaching a market value of US$ 75.9 million at the end of 2021.

Will Increase in Consumption by Infants Boost the Market for MFGM Ingredients?

MFGM for infant nutrition is a growing segment in the overall MFGM ingredients market. Growing awareness about MFGM as a healthy supplement is anticipated to drive high demand over the coming years.

Use of MFGM ingredients for infants is anticipated to create an absolute $ opportunity of US$ 145.1 million by the end of the assessment period of 2022- 2032.

Key manufacturers of MFGM ingredients are employing sustainable technologies and optimization of systems for diverse end users. Key market players are focusing on developing new products that are designed to address the problems of the elderly and infant population, such as cognitive health and immune development.

What is the global MFGM ingredients market size?

How is the market for MFGM ingredients expected to progress?

Worldwide demand for MFGM ingredients is anticipated to reach US$ 234.4 million by 2032.

How did the milk fat globule membrane ingredients market perform over the past four years?

Which end user accounts for the most consumption of MFGM ingredients?

Oat Ingredients Market is expected to witness steady growth by 2030. The rising fitness and medical ...