The molluscs market is expected to register a CAGR of 5% by garnering a market value of US$ 106.04 Billion in 2032 from US$ 65.1 Billion in 2022.  The growing food industry across the globe is anticipating market growth. Moreover, the growing health consciousness among consumers has increased the demand for nutritious food products and the consumption of molluscs. This reduces the risk of chronic diseases, which, in turn, is expected to promote market growth during the forecast period.

Furthermore, according to the Fact.MR’s analysis, continuously changing lifestyles and busy life schedules of consumers are demanding processed seafood like canned molluscs, which, in turn, are gaining popularity among the consumers. Moreover, the increasing consumption of molluscs products due to several health benefits such as reducing the risk of chronic diseases is propelling the growth of this segment in the forecast period.

Historically from 2017 to 2021, the demand for molluscs grew at a significant rate, reflecting a CAGR of 5.3%. The lockdown announced during the COVID-19 pandemic had disturbed transportation and suspended the supply of fish food products for a short duration.

Aquaculture and fishery supply chains were susceptible to being disrupted or stopped by measures arising from COVID-19 restrictions. In the aquaculture sector, the unsold production of molluscs has resulted in increasing levels of live fish stocks. Further, it has created higher costs for feeding and risks of fish mortalities around the world.

In the years to come, the industry size is projected to increase owing to the increasing investments in the entry of new players, R&D activities, product innovation, effective resource allocation, technological breakthroughs, and increasing competition among the rivals to expand its customer as well as a regional base. Considering this, in the upcoming years, the molluscs market is expected to register a staggering CAGR of 5% in the forecast period.

Rising Demand for Protein Rich Diets to Boost the Market

The increasing demand and consumption for protein-rich diets instead of high-calorie food product intake are propelling the growth of the global molluscs market. Seafood is a low-fat and rich source of protein, which is used for muscle building, and it also contains ingredients such as vitamins, iron, and omega-3 fatty acid, which are anticipating the market growth.

In addition to this, increasing demand for processed seafood is also driving the market growth during the forecast period.

The growing aquaculture fish production in developing economies like China, India, and Japan is the major driving force of the market. Furthermore, increasing disposable income of the consumers and rising inclination toward a healthy lifestyle, which has led to a rise in the consumption of protein-rich food, are the major growth factors for the market over the last few years.

The growing demand for premium quality food products due to freshness, diversity of the products, and convenience for food safety are expected to boost the market growth during the forecast period.

The price of mollusc meat has also increased over the years owing to the increased demand for sources of protein. In the near future, stringent government policies and incentives, as well as laws, are projected to hinder market expansion. Furthermore, customers' spending power has gone down with their disposable income, negatively impacting the market's earnings. 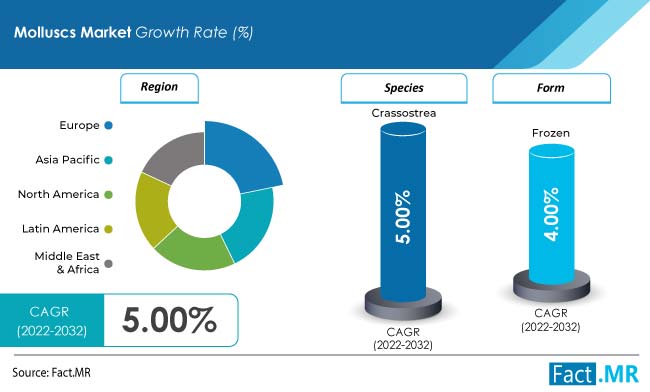 How are Asia Pacific Countries Turning Out to be a Hotspot?

According to Fact.MR, the Asia Pacific region makes the largest contribution to the global molluscs market of over 60% in 2022, expanding at a 5.7% CAGR. This can be credited to increased inclination among consumers towards a healthy lifestyle and increasing disposable income, which, in turn, will drive demand for healthy and nutritious food products.

How will Growth Prospects unravel across Europe?

According to Fact.MR, Europe is the fastest-growing molluscs market and is expected to witness a CAGR of 5.9% from 2022 to 2032. The growing demand for premium quality food products due to freshness, diversity of the products, and convenience for food safety are expected to boost the market growth during the forecast period.

The rising consumption of molluscs products in countries like Germany, Spain, and Italy, is due to the increasing awareness about the health benefits that are propelling the market growth.

Which Species of Molluscs is driving the Market?

According to Fact.MR, the Crassostrea segment contributes to the largest market share of more than 28% of the global molluscs market revenue and is expected to grow with a CAGR of 5% from 2022 to 2032.

The increasing production of Crassostrea products in developing economies like India, China, and Japan is propelling the growth of this segment. The rising popularity of fish food due to growing awareness about health consciousness among the consumers has projected the market growth in the forecast period. In addition, the scallops segment is expected to expand with the fastest CAGR of 5.5% during the forecast period.

Which Form of Molluscs is projected to acquire a Major Revenue Share in the Market?

According to the Fact.MR’s analysis, the frozen segment is projected to hold the largest market share of more than 54% of the global molluscs market revenue and is expected to expand with a CAGR of 4% through 2032.

The consumer's inclination toward consuming a healthy, nutritious, and protein-rich diet has significantly accelerated the demand for frozen seafood products. In addition to this, the rising demand for processed and packaged fish products worldwide has projected market growth during the forecast period.

Which Distribution Channel is Bringing in the Highest Revenue to the Market?

The hypermarkets and supermarket channels are projected to acquire a share of more than 40% in the global molluscs market. Suppliers of molluscs products use the traditional retail channel to sell by word of mouth, advertising, and marketing.

Furthermore, the online segment of the molluscs market is expected to register the fastest expansion during the forecast years, with a CAGR of 5.7%. The rising adoption of the e-commerce sector for the shopping of food products and essential products by consumers due to the internet penetration rate has witnessed lucrative growth in recent years.

Several suppliers of molluscs are offering products on their websites which is further expected to drive industry demand during the forecast period.

What is the Intensity of the Competition in the Global Molluscs Market?

As of 2022, the market for molluscs reached nearly US$ 65.1 Billion, according to Fact.MR

The growing health consciousness among consumers has increased the demand for nutritious food products and the consumption of molluscs.

Germany and China are the top two countries driving demand for molluscs.

According to Fact.MR, the Crassostrea segment contributes to the largest market share of more than 28%.

The hypermarkets and supermarket channels are projected to acquire a share of more than 40% in the global molluscs market.

*168 figures and 56 tables includes by FactMR