The wide usage of toy drone among young generation have created robust demand. Toy drones are also used as education purpose in schools and colleges. Drones are also frequently utilized for leisure pursuits including animal observation, racing sports, and photography. The consumer demand for the production of inexpensive and lightweight drones is very high. During the projection period, it is anticipated that rising drone adoption and the development of drone-related services will favor the manufacturers.

There has been a gradually expanding demand for toy drones and autonomous aerial vehicles in regard to a number of applications across multiple sectors as a result of a large increase in air traffic over the assessment period. As a result of shifting consumer interest and increasing disposable income, there will be more conventional aircraft available, which is anticipated to fuel the expansion of the toy drone market throughout the course of the forecast period. The drone market is expected to reach around the valuation of US$ 100 billion out of them defense will contribute nearly US$ 70 billion, hence holding the largest market share.

Leading market participants are functioning vigorously and expanding their network and resources globally. Extensive investments are done to strengthen their infrastructure with the goal of gaining a sizable market share.

From 2018 to 2022, the global market for toy drone registered a CAGR of 5.1% Fact.MR, a market research and competitive intelligence provider, reveals that the market will exhibit growth at 8.6% CAGR during the forecast period of 2023 and 2033. 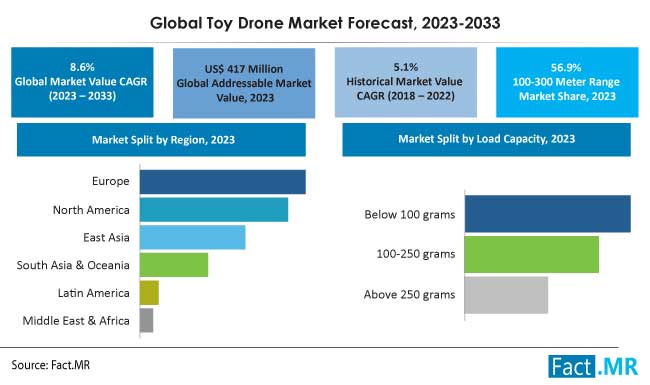 Market share analysis of toy drone based on load capacity and region is provided in the above image. Under the load capacity segment, below 100 grams sub-segment will dominate with 43.4% market share in 2023.

“Rising Demand for Aerial Imaging and Data Collection through Drones”

Drones have consistently shown to be beneficial to the photography industry, capturing the globe with new perspectives and technologies. Due to the advancement of drone technology, aerial photography and data collection have become more dependable and straightforward. Drones are increasingly being used by photographers all over the world to capture beautiful aerial shots.

“Lightweight and Compact Drone Accessories the Way Ahead”

The size and weight of a drone and its attachments are the most important characteristics. Different nations make distinctions between tiny and large, or light and heavy drones. The Dutch Human Transport and Environment Inspectorate distinguishes between heavy and light drones. The creation of lighter and more compact drone parts for the general population is the current emphasis of drone and accessory development.

Security and military applications are the major users of heavy drones. Drone also helps to transport bigger payloads. As a result, there has been a significant transition from heavy drones to lighter drones. Consequently, the light weight drone is highly preferred as it becomes easy to operate on the field.

What Do Toy Drone Manufacturers Need to Watch Out for?

Regarding toy drones and flying vehicles, regional governments have a number of laws and certifications. Governments all around the world have taken steps to protect people privacy, which might potentially drive the market for toy drone.

Increased regulation and stringent certification tend to have a negative impact on the market, which may lower the demand for toy drone globally. The market for toy drone is expensive, and more infrastructure is needed for this service. Radars and navigation systems, among other sophisticated architecture are widely used to track and control air traffic.

How toy drone market is skyrocketing in United States?

United States toy drone market is valued at US$ 98.8 million in the end of 2023 and expected a growth of 6.3% CAGR by the end of 2033. Moreover, United States is the largest producer of drone camera. According to Federal Aviation Administration (FAA), there are total 865,505 drones registered in United States.

Due to the widespread use of drones and autonomous aerial vehicles, North American area, notably the United States, has the most potential for growth in the toy drone market industry. United States defense department is also encouraging the use of drones, which has fueled the rising demand for drone systems in the years to come. Therefore, the rising development in drone industry for recreational purpose will increase the demand for toy drone.

Why is the Israel Toy Drone Market Expected to Be Highly Lucrative?

Israel exports in the UAV sector worth of US$ 4.62 billion in the year, 50% and 33% exported to Europe and Asia Pacific region respectively. The average annual exports done by Israel is US$ 100 million which contributes to near around 61% of their UAV manufacturing in the year 2019.

Due to the widespread use of unmanned aerial vehicles (UAV), in numerous industries and the increase in conventional aircraft, Israel appears to be the most lucrative after United States. Due to this, it is anticipated that air traffic will increase significantly over the course of the assessment, which will eventually fuel the market for toy drone.

Due to its advantage in terms of infrastructure development and technical improvement, Israel is most likely to drive the growth of the toy drone market.

Which range capacity is expected to surge toy drone market?

Globally the demand for 100-300 m toy drone is increasing as they are more efficient in long distance communication. The other key factor to influence the sub-segment’s growth are deployment of artificial intelligence and integrated instruments with high bandwidth driving the consumer traction.

Why sales channel is estimated to support market growth in the toy drone market during the forecast period?

Online sales channel for toy drone is expected to increase in future as the pandemic has accelerated the demand for online shopping rather going outside. Apart from this, due to the busy lifestyle the end users prefer to do online shopping to save time.

Therefore, the online sales channel will be highly fragmented in the assessment years and it will contribute the market share of 76.9% and reach the market valuation of US$ 320.5 million by the end of 2023.

All the industry leader in automotive are making their own strategy to stand out from other competitors in the toy drone market. Companies such as DJI, Potensic, Holystone, Ryze Tech, BetaFPV, Kidomo, Robolink, Heygelo, Dwi Dowellin, Droconand others are the leading players have entered the market and make their brand presence in the segment.

The global toy drone market is differentiated with many large and small market players. Therefore, in order to survive and thrive in such a competitive environment, manufacturers must differentiate their products with technologically advanced and unique products. This competitive environment can also lead to lower product prices to maintain market positions, which can adversely affect manufacturers' profit margins.

Europe will lead the global toy drones market accounting for 32.1% market share in 2023.

Worldwide demand for toy drones is anticipated to reach US$ 951.5 million by 2033-end.