Cases of kidney, lung, liver, and heart damage have been rising steadily over the past decades.

While advancements in the medical & diagnostic sector are playing a vital role in raising the market value for serological transplant diagnostics, growing awareness regarding proper diagnosis remains another key growth factor.

Regional players across North America, Europe, and Asia Pacific are set to witness impressive growth over the coming years, while rise in requirement from hospitals and other key distribution channels will further cater market growth in future.

A new study by Fact.MR provides thorough analysis of the global serological transplant diagnostics market, along with insights of key driving & restraining factors, demand-supply trajectories, and new trends around the globe for the forecast period of 2021 to 2031.

The report tracks the industry in 20+high-growth markets, and also details how the COVID-19 pandemic is shaping market growth.

Serological transplant diagnosis, being a highly significant part of successful and efficient organ transplantation, has gained rapid traction over the past years.

Growth in key distribution channels such as hospitals and organ transplantation centers, to name a few, has further raised demand during the last 5 years from 2016 to 2020, which, in turn, has attracted more stakeholders to this industry.

Rise in cases of serious lung, liver, and kidney diseases, and medical & diagnostic advancements, are fuelling the sales of serological transplant diagnostic equipment.

Additionally, various initiatives taken by leading health organizations such as the WHO (World Health Organization), CDC (Centers for Disease Control and Prevention), and others are aiding the growth of suppliers in this industry.

According to Fact.MR, the global serological transplant diagnostics market is set to expand at around 2.5% CAGR through 2031.

How is Rising Need for Organ Transplants Aiding Demand for Serological Transplant Diagnostics?

Prevalence of organ damage cases has substantially raised the demand for serological transplant diagnostic solutions since the past decade. According to a report published by the National Kidney Foundation, over 2 million people across the world currently receive treatment for kidney failure, while a majority are treated in only five countries - the United States, Japan, Germany, Brazil, and Italy.

As per the report, more than 80% of all patients who receive treatment for kidney failure are from affluent countries, with universal access to healthcare and a large elderly population.

As stated in a report titled “The Burden of Lung Diseases”, published by the ERS Organization, respiratory diseases are among the leading causes of death worldwide, while lung infections, lung cancer, and chronic obstructive pulmonary disease (COPD) together account for approximately 10 million deaths yearly. This indicates the rising need serological transplant diagnostic equipment across regions.

What are the Key Challenges Faced by Serology Transplant Diagnostic Equipment Suppliers?

While cases of kidney, heart, lung, and other organ damage are increasing steadily, there is still lack of knowledge and awareness regarding timely diagnosis and receiving proper treatment.

Furthermore, serological transplantation and diagnosis are quite expensive, and hence, not affordable by everyone.

As stated in a report published by NCBI, liver disease accounts for nearly 2 million deaths per year, worldwide. The fatality of liver, kidney, lung, and other organ damage is well-known, but still, organ transplants are yet to be widely adopted by patients who suffer from severe damage.

Manufacturers and suppliers of serological transplant diagnostics are investing their efforts to produce a broader range of affordable products as a solution to this issue. 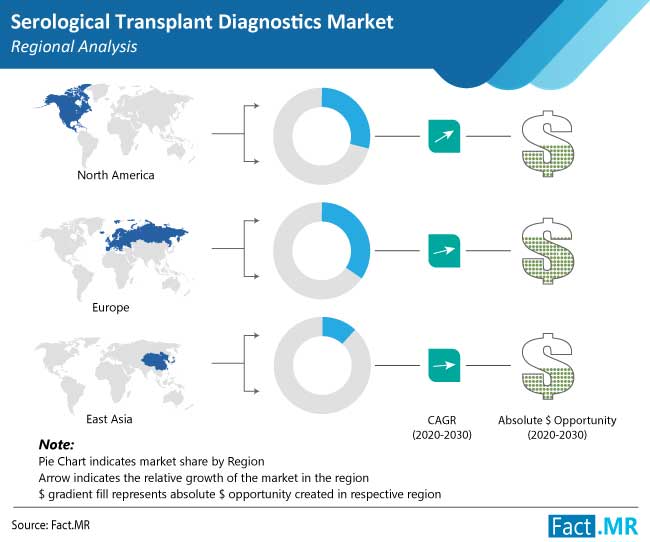 Why is the Serological Transplant Diagnostics Industry Anticipated to Exhibit Hegemony in the U.S.?

The United States is the leading country in North America as far as serological transplant diagnostics is concerned, and will witness impressive rise in demand over the coming years.

Highly advanced medical & diagnostic sectors coupled with rise in cases of severe kidney and heart diseases are fuelling the sales of manufacturers in the country.

As stated in a report titled “Heart Disease Facts”, published by CDC on 8th September 2020, heart disease cost the United States around US$ 219 billion each year from 2014 to 2015, which includes the cost of healthcare services, medicines, and lost productivity due to health.

As per the report, heart disease is the leading cause of death for men, women, and people of most racial and ethnic groups in the United States, and around 655,000 Americans die from heart disease, including heart damage, each year. As more people are becoming aware regarding the fatality of heart diseases, the rate of organ transplantation is rising in the U.S.

What Enables China to Maintain a Leading Market Position?

China, being the epicenter of the world’s fastest-growing market for serological transplant diagnostics, East Asia, is in the spotlight for manufacturers and suppliers in this industry.

Highly advanced diagnostics industry, and increase in cases of liver, kidney, and lung damage, are raising the revenue of players in in China.

How Lucrative Would Germany be for Providers of Serology Transplant Diagnostics?

Germany is the dominating country in Europe for serological transplant diagnostics, owing to surge in demand from highly developed hospitals and blood banks & transportation centers.

According to a report published by the Germany Trade and Investment (GTAI) Organization, Germany’s healthcare market is number 1 in Europe by volume, number of patients, medical technology manufacturers, and healthcare providers. As per the report, Germany’s hospital industry is highly advanced, while healthcare spending in the country exceeded EUR 400 billion in 2019, and is growing further.

According to a report published by the PLOS Organization on 24th April 2020, in the adult German population, Chronic Kidney Disease (CKD) is estimated to have a prevalence between 2% to 7%, while a majority of CKD patients are classified as stage 3.

This is indirectly contributing to the rise in sales of serological transplant diagnostic equipment across the country.

Do Suppliers of Serological Transplant Diagnostic Equipment Need to Look at India?

India has emerged as another lucrative market for serological transplant diagnostics, and is expected to take its spot in the limelight for suppliers and manufacturers in this industry. Increase in cases of lung, heart, and kidney failure, coupled with steady growth of the healthcare & diagnostics industry is spurring growth in India.

According to a report titled “Chronic Kidney Disease in India”, published by the American Society of Nephrology on 7th May 2018, reported a prevalence of CKD in different regions across India ranges from 1% to 13%.

Recently, data from the International Society of Nephrology’s Kidney Disease Data Centre Study reported a prevalence of 17%, while the etiology of CKD varies considerably throughout India. These statistics give an idea regarding the upcoming opportunities in India for stakeholders in the serological transplant diagnostics space.

Which Product is Highly Sought-After for Serological Transplant Diagnostics?

According to Fact.MR, reagents & accessories, followed by systems, are dominating the global serological transplant equipment market in terms of product.

Reagents and accessories are an integral part of various types of serological transplant diagnostic tests such as blood type testing, Human Leukocyte Antigens (HLA) testing, and other serological tests, as they are highly useful and crucial for effective organ transplantation.

Currently, rise in demand for serological transplant diagnosis is becoming more prevalent in applications such as kidney and liver transplantation. Increase in cases of kidney and liver damage is expected to further fuel the sales of manufacturers in this industry.

Some of the other key segments aiding market expansion in this category are heart and lung transplantation.

Rise in Demand from Hospitals to Bolster Market Growth

With steady expansion of hospitals, demand for serological transplant diagnostic equipment is surging around the globe. According to the European Commission (EC), the EU hospitals and healthcare industry is growing fast, while contributing to nearly 2% of EU’s total manufacturing workforce.

The global serological transplant diagnostics market is fragmented in nature and thriving on potential players. In order to capitalize on new opportunities, key market players are diversifying their product portfolios. For instance,

Which are the top companies operating in the market?

Which are some of the lucrative markets for serological transplant diagnostics?

The United States, Canada, China, Germany, The United Kingdom, Japan, France, and a few others are lucrative markets for serological transplant diagnostics, and are expected to dominate throughout the forecast period.

Which is a highly sought-after product for serological transplant diagnostics?

Presently, reagents & accessories are the mostly sought-after in terms of product, and are expected to keep leading over the forecast period as well.

Veterinary Imaging Systems Market to expand at an impressive CAGR through 2022. Sales of veterinary ...