Zootechnical feed additives have observed huge demand growth in the past years owing to their benefits towards animal health as well as the environment. These feed additives are specifically popular for digestibility improvisation and gut flora maturation of animals.

The quest for nutritious and digestible feed additives in the livestock and poultry industry will open new gates for zootechnical feed additive suppliers. Consumer shift from animal-based to plant-based protein-rich foods has also driven the market for phytogenic feed additives.

As such, sales of zootechnical feed additives increased by a compound annual growth rate of 5.6% from 2017 to 2021.

Zootechnical feed additives are anticipated to see huge demand during the forecast period as well owing to rising scientific studies and a ban on the use of antimicrobial growth promoters in some regions.

Fact.MR suggests that the global zootechnical feed additives market will reach a valuation of US$ 19.1 Billion by 2032-end.

Over the 2017-2021 period, the global zootechnical feed additives market registered a CAGR of 5.6%, and according to Fact.MR, a market research and competitive intelligence provider, it is projected to exhibit higher growth at 7% CAGR between 2022 and 2032. 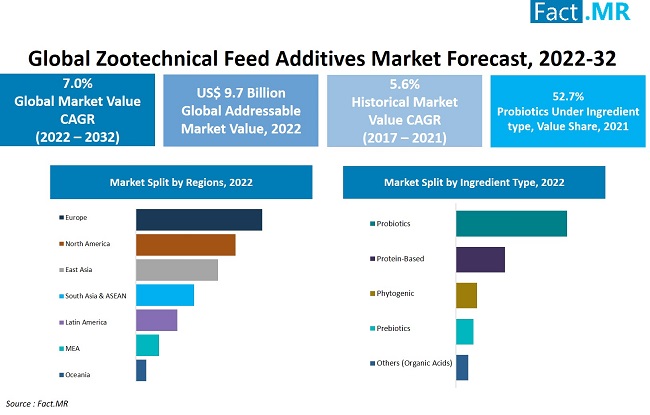 Why is the World Seeing Increasing Popularity of Zootechnical Feed Additives?

In early domestication patterns, domesticators used to feed their cattle and poultry animals with whatever sources of food were available, ranging from grass, pellets, grains, etc., which was then enough for them to survive. However, an increase in the population had surged the number of mouths to be fed and has driven the need for bigger livestock and poultry farms.

Limited availability of grazing lands and fodder has led to low production of animal goods. Efforts towards balancing the demand and supply ratio have caused several health deficiencies in animals such as poor performance, delayed pregnancies, appetite loss, and indigestion of meals. Rigorous scientific efforts and government initiatives towards animal health development have, propelled innovation in the zootech feed additives market.

“Increment in Nutrient Utilization & Decrement in Cost of Feed Ingredients”

Feed additives serve to fulfill any shortages in animal feed; however, the ingredients employed were more expensive than the animal feed itself. Consequently, in the past, the use of feed additives was limited to a very small crowd of wealthy domesticators.

What are the Issues with Zootechnical Feed Additives?

With increasing popularity of feed additives, the adverse effects of their abuse have also come to light. Prebiotics and organic acids, specifically, are dose-dependent and can cause severe side-effects in case of over consumption.

Phytogenics pose a threat of potential interactions with bacteria, and hence, have limited approvals and usage. Apart from this, protein-based and enzyme-based zootechnical feed additives have limited shelf life and are highly sensitive to the environment.

All these factors together are hurting zootechnical feed additives market growth to some extent.

Why is Europe Dominating Global Consumption of Zootechnical Feed Additives?

With global ascendency in the production and consumption of animal-by-products such as meat, chicken, and eggs, Europe accounts for the largest market share in the global zootechnical feed additives market. The regional market is estimated at US$ 2.8 billion at present and is further expected to continue its dominance over the forecast period.

Growing demand for reliable animal products from end-use industries is likely to create many opportunities for zootechnical feed ingredient manufacturers in the region going forward.

Why is the East Asia Zootechnical Feed Additives Market Expected to Grow Rapidly?

Around 13% of the East Asian land is used for agriculture, which calls for the domestication of ruminants in the region. East Asia is a developing region in almost every sector.

In the past few decades, the use of animal welfare products has become a trend in the region. Demand for animal products and by-products in East Asia is also increasing with the population shifting their interests. Demand for meat, chicken, eggs, and other poultry products is booming with the increase in per capita disposable income of the population.

All these factors will together propel the East Asia zootechnical feed additives market at a CAGR of 8.8%.

As demand for quality animal products increases, the use of zootechnical feed ingredients will increase, encouraging manufacturers to produce more nutritious additives. Under such a scenario, East Asia offers a lucrative market for new entrants as well.

Why are Zootechnical Feed Additive Probiotics Most Widely Used?

There is a substantial number of approved products of probiotics in the EU. Probiotics include innovative products that can become an alternative to antimicrobial agents or can reduce the use of antimicrobial in feed additives. In addition, probiotics are beneficial for animal gut health as they conquer enteropathogens and putrefactive bacteria, thereby reducing diarrhoea, opportunistic environmental pathogens, and wet litter.

Thus, the consumption of probiotics as zootechnical feed additives for animals has increased steadily in the recent past, surpassing a market valuation of US$ 4.8 billion in 2021. Furthermore, the growing need for gut flora maturation in animals is expected to amplify the probiotics feed additives market 1.9X by the end of 2032.

The growing animal feed industry has observed the importance of plant-based feed products for varied animal species for better health. This factor has driven the production of phytogenic feed additives in the market. However, manufacturers are facing challenges to gain the approval of these additives owing to lack of scientific studies related to the efficacy and safety of their use.

Fact.MR suggests that the establishment of more scientific studies on phytogenic feed additives will escalate their use as zootechnical feed additives over the coming years, creating an absolute $ opportunity of US$ 1.2 billion by 2032.

Key suppliers of zootechnical feed additives are adopting organic growth strategies such as product innovation and launches to sustain their position among global leaders. Product approvals across different geographical legislations are the bottlenecks to the entrance of emerging players in the market.

Key industry players are concentrating on capacity expansion as well as enhancement of their global reach, using both organic and inorganic growth tactics such as acquisitions and collaborations.

The global zootechnical feed additives market is currently valued at US$ 9.7 billion.

Global demand for zootechnical feed additives is anticipated to reach US$ 19.1 billion by 2032.