Worldwide demand for potato flakes accounts for a market valuation of US$ 7.2 billion in 2023 and is forecasted to surge to US$ 12.8 billion by the end of 2033. Over the course of the next ten years, the global potato flakes market is predicted to exhibit expansion at 5.9% CAGR.

Potato flakes have a high food value owing to their composition, which contains minerals such as potassium and calcium, vitamin C, and carbohydrates. This nutrient-rich composition of potato flakes makes them a favourable choice for convenience food manufacturing and other food service applications. Potato starch, potato flour, mashed potato flakes, and dried potato flakes are expected to witness high demand than other products over the coming years.

Rising disposable income, changing consumer preferences, growing popularity of plant-based diets, increasing investments in research and development, growing use of advanced technologies in food processing, and rising adoption of organic farming practices are other aspects that could promulgate potato flake consumption across the forecast period.

However, fluctuations in raw material pricing and availability are expected to impede market development to a certain extent in the future. Moreover, stringent norms regarding emissions from food factories across the world are also expected to prove to be a major challenge for potato flake manufacturers through 2033.

On a regional level, demand for potato flakes in the Asia Pacific region is anticipated to account for a notable market share and this can be ascribed to the presence of strong agricultural practices in countries such as India and China. Low labour costs and supportive government initiatives are other prospects that are anticipated to boost the consumption of potato flakes in APAC going forward.

A detailed account of all trends, opportunities, restraints, and challenges affecting market expansion has been discussed in this revised potato flakes research analysis by Fact.MR, a market research and competitive intelligence provider.

Ready-to-eat foods and convenience foods have witnessed a substantial hike in demand in recent years owing to changing lifestyle trends and consumer preferences across the world. The growing popularity of veganism has also resulted in increased demand for products such as potato flour, potato powder, sweet potato flakes, etc., which is projected to benefit overall market growth through 2033. Increasing use of potato starch and potato flakes in the processing and manufacturing of convenience foods is also expected to boost potato flake sales throughout the forecast period.

Research and development activity in the food and beverages industry is increasing steadily as the demand for nutrient-rich and healthy food ingredients rises. This increased R&D activity has resulted in significant advances in the food processing industry and has also resulted in the widespread adoption of technology in various facets of the food industry. Through this increased research, food manufacturers have found various new applications for potato flakes that also spread out to other industry verticals and promote shipments of potato flakes. 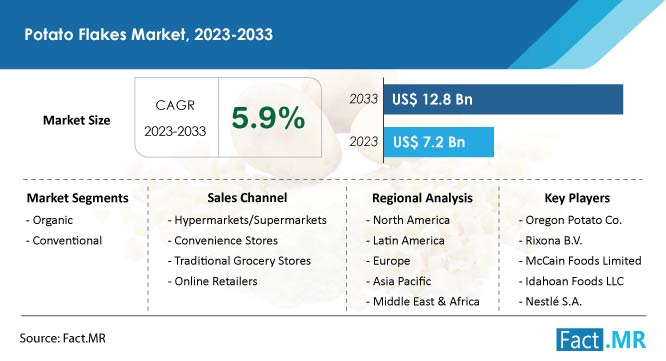 Will the United States Be an Investment-worthy Market for Potato Flake Suppliers?

The United States is home to some of the world’s most renowned food manufacturers and highly advanced food processing facilities, which makes it a lucrative market for potato flakes. Growing consumption of convenience foods, increasing demand for organic food ingredients, rising investments in research and development by manufacturers, and changing eating habits are other factors that are expected to supplement market expansion in the U.S. throughout the forecast period.

Demand for potato flakes in the United States is forecasted to increase at a high CAGR of 8% over the next ten years making it the most remunerative market in the North American region. The growing adoption of organic farming practices in the U.S. is also predicted to affect market development over the coming years.

Will Japan & Korea Be Lucrative Markets?

Japan and Korea are witnessing some major changes in consumer preference owing to globalization and the rising influence of Western culture on the population. Dietary preferences and eating habits of Japanese and Korean people are also undergoing a change, which has led to increasing demand for ready-to-eat foods in the aforementioned Asian countries.

Potato flakes play an important role in the processing and manufacturing of many ready-to-eat foods and hence their demand is expected to rise in these countries over the coming years. Instant mashed potato flakes, instant sweet potato flakes, and potato powder are some products that are expected to witness a hike in demand in Japan and Korea.

Where in Europe Will Sales of Potato Flakes Shine?

Germany like many other European countries has been witnessing a hike in the popularity of organic foods and organic food ingredients, which is anticipated to propel sales of products such as potato flour, potato powder, and potato flakes in the future. Food manufacturers in Germany are using potato flakes instead of fresh potatoes to reduce manufacturing costs and simplify their supply chains.

Growing investments by food manufacturers in research and development to explore the scope of application for potato flakes is another key aspect driving market potential in Germany. Consumption of potato flakes in Germany is projected to increase at a steady 6% CAGR from 2023 to 2033.

Where are Sales of Potato Flakes the Highest?

“Business to Business (B2B) End Use to Account for High Sales”

Based on end use, the market for potato flakes is segmented into household, animal feed, and business to business (B2B).

Potato flakes are known to have a long shelf life and this makes them a highly attractive product in the B2B end use where companies cannot afford to lose a product in storage losses. Potato flakes are easily digestible and do not affect the final taste of the product, these factors make them a highly desirable choice in the food processing and food service industry. The B2B end-use segment accounts for a major market share at present and is anticipated to maintain a similar stance across the forecast period till 2033.

Potato flakes are also witnessing increased usage in the animal feed industry as manufacturers try to incorporate more natural ingredients in their offerings.

Will We Witness Increased Consumption of Organic Potato Flakes?

Based on nature, the market is segmented into organic and conventional.

By the end of 2033, conventional potato flakes are predicted to account for around 40% of the global market share.

Potato flake suppliers are focusing on collaborations and partnerships to fast-track the research and development of novel products.

Potato flake manufacturers are also eyeing acquisitions and mergers to expand their business scope while also investing in the expansion of their production capacities in various plants.

Currently, the global potato flakes market accounts for a US$ 7.2 billion valuation.

Potato flake demand in the U.S. is projected to increase at a high 8% CAGR through 2033.

*82 figures and 54 tables includes by FactMR