Worldwide consumption of string cheese is valued at US$ 4 billion in 2022, having registered Y-o-Y growth of 5.2%. Going ahead, the global string cheese market is projected to expand at a healthy CAGR of 5.9% reaching the valuation of US$ 7.1 billion over the 2022-2032 assessment period. The United States accounts for more than 40% increase in revenue.

String cheese is recognized as a rich source of protein, vitamin B12, and vitamin K2, making it an ideal snack for health-conscious consumers. It also contains significant amounts of calcium and selenium that enhance bone and immune health.

Owing to the nutrient profile, string cheese is not only a filling snack but also boosts heart health, brain health, and overall metabolism. The advantage of taste with health benefits is expected to drive the growth of the string cheese market over the coming years.

Fact.MR predicts that the global market for string cheese will reach a valuation of US$ 7.1 billion by the end of 2032.

Cheese has become a staple ingredient in most of our food items, including snacks and salads. String cheese, specifically, has gained immense popularity as a fun snack among children. This has guided a compound annual growth of 3.2% in string cheese sales over the 2017-2021 period.

Over the coming years, this is how the market is expected to progress…

During the years 2017-2021, the global string cheese market registered a CAGR of 3.2%, and according to Fact.MR, a market research and competitive intelligence provider, the market is projected to witness growth at 5.9% CAGR between 2022 and 2032. 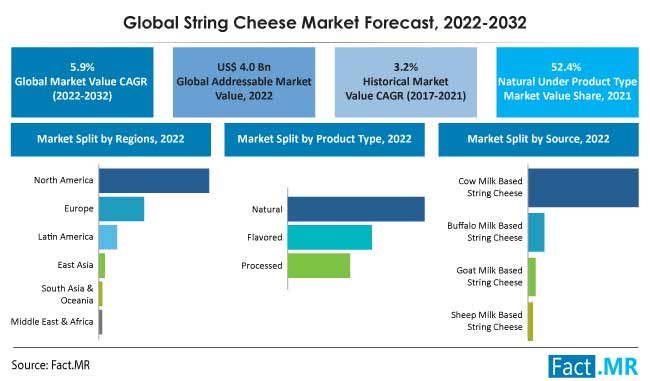 Market share analysis of product type, source, and region is provided in a nutshell in the above image. Under the product type segment, natural string cheese dominated the market in 2021 with 52.4% market share.

Why is String Cheese Gaining Popularity across the World?

String cheese has been popular among kids since its emergence. Because of its stringy texture, it's fun to chew and play with. Adults, on the other hand, prefer it as an on-the-go snack. Individually packaged string sticks can be carried to classrooms, work desks, and other locations, and they can satisfy mid-meal hunger without creating a mess.

Furthermore, to increase string cheese's popularity among youngsters, manufacturers are focusing on customized flavors and attractive packaging for kids.

What are the Challenges Hampering String Cheese Market Growth?

Increased intake of full-milk-derived string cheese has been linked to an increase in LDL cholesterol and a higher risk of cardiovascular disease. String cheese also contains high levels of sodium, which can have significant health consequences.

All these health disadvantages can have a strong negative hold on the global string cheese business.

How is Demand for String Cheese Shaping Up in the European Region?

“Germany, France, and the U.K. – Leading Markets in Europe”

Is the U.S. a Large Consumer of String Cheese?

The U.S. is one of the leading consumers of string cheese. It is set to account for more than 80% of North American string cheese consumption and 46.5% of global string cheese demand in 2022.

Inclination towards a healthy lifestyle and high per capita disposable income are two key drivers of string cheese demand in the country. The dominance of the U.S. in the global string cheese market is also guided by the concentrated presence of key manufacturers in the country.

Which Type of String Cheese Accounts for Highest Consumption?

Demand for flavored string cheese, on the other hand, is projected to grow the fastest over the forecast period. The prime reason for this is increased retail consumption of string cheese mainly as a sole snack rather than an ingredient.

Which End User Will Account for Highest String Cheese Consumption?

Increasing retail consumption has driven the sales of string cheese over the historical period, and the trend is expected to continue over the forecast period as well.

The global string cheese market is fairly fragmented with several string cheese manufacturers struggling to secure dominance. Both organic and inorganic growth tactics have been used by market players for expansion.

Acquisitions have aided frontrunners with well-researched products and an established consumer base. Expanding production facilities is another go-to strategy for major manufacturers. Supplementing sales under the influence of various labels such as organic, low-fat, etc., is paving the way for global market leaders.

The global string cheese market is valued at US$ 4 billion and is anticipated to surpass US$ 7.1 Billion by 2032-end.