Prominent players involved in the cheese concentrate market hold a nominal share, as the market is driven by domestic and local market players. Approximately 75% of the market share is captured by regional and local players, and the rest 25% has been captured by prominent market players operating in several regions across the globe.

The global cheese concentrate market is expected to further witness fragmentation with the entry of more number of regional players.

A Fact.MR study projects the global cheese concentrate market to grow at a positive CAGR of ~10% in terms of value during the forecast period (2019–2029). 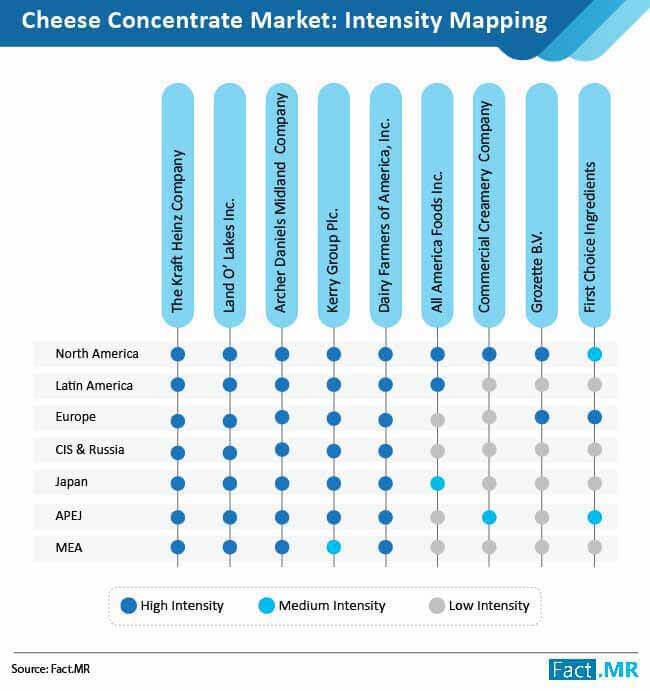 The growth in demand for flavored cheese and growing need for paste cheese concentrates over the past few years has been primarily linked to the rapid advances made in cheese concentrates and the sheer variety of options available to various consumers.

There has been a shift in the snacking market, as consumers are inclined towards natural ingredients and flavored cheese concentrates for various dressings. Thus, snacking applications are likely to play a prominent role in amplifying the overall sales of cheese concentrates during the forecast period.

Cheese concentrates are made from natural ingredients such as milk and whey. Hence, it is known for its health-enhancing functions. Cheese concentrate is used in several low-fat food preparations owing to the declaration of being a clean-label product made totally from natural components.

Cheese concentrate is also available in different flavors that are both smooth and consistent, thereby facilitating easy blending with other ingredients and resulting in a finer end product. Cheese concentrate is relatively optimal on the cost front, and can be used in smaller quantities than natural cheese.

Powder Form of Cheese Concentrate to Enjoy the Highest Demand

Food Service and Snacking Applications to Positively Influence the Market 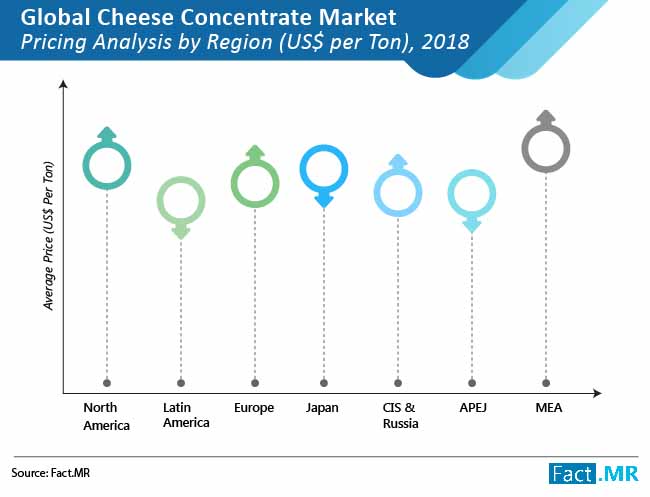 Owing to the hectic and rush hour lifestyles in developed regions, consumers are preferring on-the-go food products or food items that are easy to carry or quick to make and consume.

As a result, the demand for cheese is gaining traction across all the geographies of the globe. Cheese has been a prominent food item in North America for decades now and is a part of the daily diet of the people living in the region.

As cheese has many advantages and health benefits associated with it, consumers in the region prefer adding it to their daily meals and even consume it as a snack for increasing the nutritional value of the food they consume. With consumers becoming more health conscious and having altering taste preferences, cheese concentrate has turned out to be a favored food product in the region.

With the market in Europe and North America moving towards a saturation point, manufacturers of cheese concentrate are looking for regions that will present them lucrative opportunities in the future.

The growing cheese market in Latin America will open a plethora of opportunities for market players to capitalize on. Exports of cheese and cheese concentrate from the region are rising and countries leading this consumption are Uruguay, Argentina, Brazil, and Chile.

The growing middle class population in the region and changing diet and taste preferences of consumers are primary factors behind the rising consumption of cheese concentrate in Latin America.

Cheese concentrate is a cheap substitute for cheese, and can be used in a variety of applications. Although the dairy industry in the region is going through a decline, the consumption of cheese is however stable. This will bode well for the Latin America cheese concentrate market.

Europe is the largest consumer of cheese in the world. Several varieties of cheese are available in the region and the application of cheese is also widespread in the food industry in Europe.

The region has special cheese refineries and manufacturing units. The use of cheese and cheese concentrate is high in bakeries and households as cheese forms a crucial part of the daily diet of consumers in Europe.

However, Europe might also fall prey to market saturation and manufacturers need to concentrate on structured R&D initiatives for product innovation.

Japan is slowly emerging as one of the lucrative markets for cheese concentrates with the trend of mild snacking increasing in the region.

Moreover, with the trend of drinking gaining traction in Japan, the need for healthy and inexpensive options is also increasing, making cheese concentrate the perfect food ingredient for this purpose. The demand for cheese in Japan is more in households where people enjoy home cooking.

Asia Pacific Excluding Japan (APEJ) is the third largest consumer of cheese and related products in the world. With the growing acceptance of western culture in the region, the food habits and taste preferences of people are also increasing at an extensive rate. In spite of the growing disposable incomes of people in the region, consumers still look for inexpensive food options.

As a result, the demand for cheese concentrate is increasing in several countries in APEJ. Moreover, the growth of the fast food industry and the rising HoReCa sector in the region is likely to trigger the use of cheese concentrates to a significant extent.

The Middle East and Africa is anticipated to present manufacturers of cheese concentrate new and lucrative growth prospects. As the governments in the region are looking forward to generating revenue from other sources apart from oil reserves, a variety of industries are emerging as highly profitable options. One of them is the dairy industry.

Countries in the MEA region such as Saudi Arabia, the UAE, and Egypt are inclining towards the consumption of cheese concentrate as these countries have a high tourist footprint and are hubs of several international cuisines. This innovation in regional cuisine has also spurred the demand for cheese concentrate in the region.

What is the growth rate of the global Cheese Concentrate market?

Global cheese concentrate market to grow at a positive CAGR of ~10% in terms of value during the forecast period (2019–2029).

Which are the dominant countries in the global market for Cheese Concentrate?

The demand for cheese concentrate is relatively high in countries such as Germany, Denmark, Finland, France, Italy, and the U.K.

Concrete Reinforcing Fiber Market was valued at US$ 2.85 billion and is anticipated to reach US$ 6.4...