Worldwide manometer sales have reached US$ 534.2 million in 2022. The global manometers market is predicted to expand at an impressive CAGR of 7.6% to reach a market valuation of US$ 1.11 billion by 2032.

Sales of manometers are anticipated to increase due to rising demand for pressure measuring equipment across industry verticals and increased focus on the creation and marketing of revolutionary portable measuring devices.

Manometers are instruments used to measure and calculate the pressure at one or more places. A glass or plastic U-shaped tube filled with gas or liquid makes up a conventional simple manometer.

Numerous industries, including healthcare, manufacturing, construction, and others are using these devices in a broad variety of ways.

Heating, ventilation, and air conditioning (HVAC), as well as pneumatic and low-pressure gas systems, are all experiencing an increase in demand for manometers.

Depending on the application, manometers measure air pressure utilising U-shaped tube containers that are opened at one or both ends. Therefore, it is anticipated that continued HVAC sector growth and rising air pressure measurement instrument use will support market expansion. 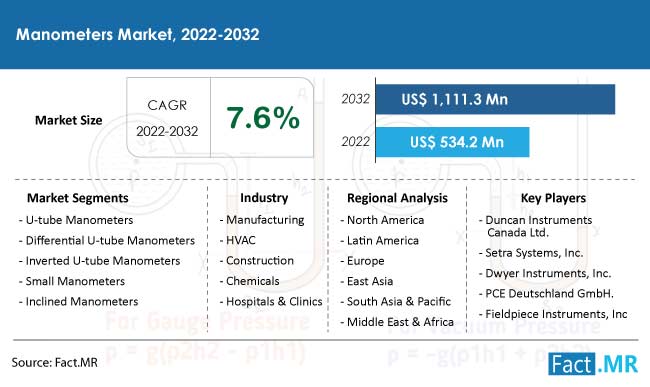 What are the Industry Dynamics Influencing Manometers Market Growth?

“Rising Application of Manometers across Industry Verticals Due to Their Versatility”

Manometers were once exclusive to the healthcare industry. However, the versatility of manometers has made them popular across a variety of sectors. Manometers are used in the chemical industry to maintain temperatures as well as in the extraction of gas and oil.

Manometers provide several benefits, but poor dynamic response, big and unwieldy design, frequent levelling requirements, a limited operating range, and a high likelihood of inaccuracy owing to condensation are some of the barriers to market growth.

The demand for traditional analogue and U-tube manometers is also being hampered by the development of revolutionary digital air pressure measuring instruments and a movement in consumer preference toward miniature devices.

Oversize and old manometer designs are getting a poor response from end users. The high demand for advanced and accurate result manometers is increasing.

Thus new entrants have large scope in the manometers market for producing easy-to-handle and novel products.

In 2022, North America is expected to account for 23% of the global market share. In the U.S., a large number of the population is suffering from the blood pressure problem, because of changing lifestyles. Manometer sales have surged due to high demand from home use and in the healthcare industry.

Germany intends to increase the size of its chemical industries in Europe. The demand for manometers in the Europe market would rise as a result. Currently, Europe is likely to hold 26% of the global market share.

The manometers industry will expand in the Asia Pacific region as a result of the region's constantly growing population and the government of China and India's ongoing improvements in the health sector. Additionally, the establishment of industries in India's rising economy will raise the demand for manometers.

Which Industry Accounts for High Use of Manometers?

Manometers are instruments used to measure and calculate the pressure at one or more points. Numerous industries, including healthcare, manufacturing, construction, and others are using these devices in a broad variety of ways.

To measure and determine air and liquid pressure, manometers are essential in the oil and gas industry's downstream processing and upstream oil and gas extraction processes.

Accordingly, it is predicted that an increasing number of such initiatives and new projects to increase oil productivity would open up profitable chances for the growth of the manometers market in nations such as the U.S., China, Saudi Arabia, and others.

To meet the growing demand for manometers, major market participants are placing a strong emphasis on investing in the creation of novel, simple-to-use measurement devices that are tailored to certain applications.

Over the coming years, it is anticipated that numerous new product launches and developments will support market growth for manometers.

What is the growth rate of the manometers market?

Global sales of manometers are slated to rise at 7.6% CAGR.

What is the current value of the manometers market?

The global manometers market is valued at US$ 534.2 million.

What valuation is the manometers market expected to reach?

What is the share of Europe in this market?

At present, Europe holds 26% of the global market share.