The global carglumic acid market is projected to be valued at around US$ 132 Mn in 2021, which accounts for around 0.6% of total orphan drugs revenue share, with the market slated to expand at a compound Y-o-Y growth of 7.5% over the decade.

Attributed to the usage of carglumic acid as a lifesaving therapeutic drug, it is poised to showcase substantial growth over the period of 2021-2031 as therapeutic drug demand keeps rising. Further, rising use-case of carglumic acid as an orphan drug is poised to uphold its market value at US$ 300 Mn by 2031, thus gaining 200 BPS in its market share of orphan drug sales.

Moreover, on the basis of dosage form, orally disintegrating tablet sales have dominated accounting for around 45% of the total carglumic acid drug market share, and are projected to gain around 250 BPS over the next ten years.

According to Fact.MR, a market research and competitive intelligence provider, over the past half-decade, global carglumic acid market value increased at a CAGR of nearly 6.4% with the market standing of US$ 124 Mn in 2020. Orally disintegrated tablets accounted for nearly half of total market share, and the trend is projected to remain the same over the decade.

Additionally, carglumic acid’s potential to be used as a repurposing drug for the treatment of various diseases is poised to proliferate its consumption by 2031, with global market valuation slated to reach around US$ 300 Mn.

Moreover, over the years, carglumic acid has gained traction owing to its ability to treat urea cycle disorders, hence, providing growth in demand for the drug. For instance, deficiency of two transporters or any one of the hepatic enzymes, which are involved in the detoxification of ammonia, results into urea cycle disorders. This further leads to severe brain injury, and can only be prevented by reducing the accumulation of ammonia, the most toxic metabolite.

The above-discussed factors coupled with surging demand for carglumic acid for hyperammonemia treatment is projected to provide an absolute $ opportunity worth US$ 168 Mn through 2031.

How Will Carglumic Acid Usage for Ammonia Detoxification in Organic Acidurias Bolster Demand for the Drug?

Further, reduction of ammonia levels has been identified as a medical priority in OA’s acute de-compensation procedures. Since, carglumic acid can be effectively used to reduce accumulation of ammonia, its uses for ammonia detoxification in organic acidurias is projected to drive the global market at a CAGR of around 7.5% over the decade.

What are the Different Characteristics of Carglumic Acid that are Poised to Propel its Demand?

Drug repurposing or multiple use of any particular drug for treating varied diseases has remained the most popular therapeutic strategy. Carglumic acid has thus gained popularity owing to its ability to be used for multiple disorders such as preventing ammonia intoxication, treating patients with hyperammonemia, accelerating cancer cell suppression & promoting apoptosis, and preventing brain damage.

Moreover, consumption of carglumic acid for the prevention of intellectual disability among children has improved its market position among orphan drugs, thus improving its revenue generation capability.

What Obstructions May Limit Sales of Carglumic Acid?

Also, carglumic acid drug has a shorter shelf life, with the need for bottles to be discarded after a month of opening. These factors are poised to act as a hindrance to carglumic acid sales growth over the forecast period.

Which Region Market is Projected to Provide Lucrative Opportunity for Sales of Carglumic Acid?

North America is poised to provide the most lucrative opportunity for carglumic acid sales, and accounted for around 40% global market share in 2020. This is mainly attributed to rise in ammonia levels in patients leading to extensive muscle contractions.

In addition, various patients suffering from idiopathic epileptic seizures in the region have been witnessed to acquire hyperammonemia, as production of ammonia in red blood cells. Carglumic acid has thus gained significant traction among North American healthcare professionals for treating hyperammonemia.

Moreover, healthcare spending in the U.S. accounts for around 17% of the country’s GDP, thus providing a positive outlook to the market for carglumic acid. Also, the country is known for continuous innovations in healthcare practices, technology, and infrastructure. The U.S. is at the cusp of mainstream implementation of new-age digital solutions such as wearables and telehealth.

Thus, the outlook of the North America healthcare sector looks promising with positive growth predicted over the next few years, given the increased partnerships and M&A initiatives between medical device manufacturers and life science corporations. 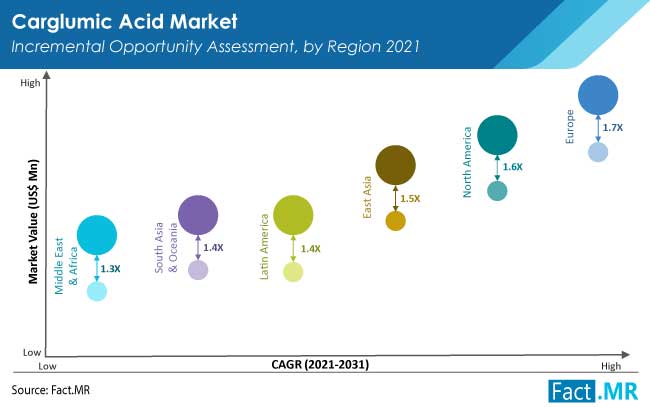 How is Demand for Carglumic Acid Shaping Up in Established and Evolving Markets?

Brazil: In Brazil, hepatic encephalopathy is well-recognized among clinical complications associated with chronic liver diseases. Nearly 30% of patients suffering from cirrhosis face mortality in hepatic coma, with a majority of these being affected with hyperammonemic portal systemic encephalopathy (PSE).

Healthcare practitioners in the country are therefore focusing on the adoption of carglumic acid for managing recurrent hyperammonemia in patients with abernethy malformation. Also, Brazil tops the list in healthcare spending among Latin American countries. Thus Brazil is poised to provide a high absolute $ opportunity worth US$ 5.6 Mn through 2031.

U.K.: Market outlook for carglumic acid in the U.K. is projected to be positive over the next ten years. A leading European company in orphan drugs, Orphan Europe, developed Carbaglu (carglumic acid), which is the first drug approved by the Food and Drug Administration (FDA) for the treatment of NAGS deficiency.

NAGS deficiency is considered to be one of the most devastating diseases prevailing among the European population. Several new-borns in the region have showcased symptoms caused by NAGS deficiency, thereby demanding immediate & effective medical care for pulling back high ammonium levels to normal.

Attributed to these factors, the U.K. carglumic market is projected to progress at a CAGR of around 7% whilst providing an absolute $ opportunity worth US$ 15 Mn over the forecast period.

Japan: The Japanese healthcare system is touted as one of the best across the world, with world-class affordable caregiving services and medical facilities that have helped increase life expectancy rates in the country. Additionally, a large number of people in Japan suffer from migraine, epilepsy, and psychiatric diseases such as bipolar disorder.

Valproic acid (VPA) is extensively used for treating such patients; however, majority of them have been reported to be affected with hyperammonemia during the treatment. As carglumic acid enables effective reduction in plasma ammonia concentrations, it is expected to gain immense traction for treating asymptomatic patients with congenital epilepsy, migraine, and other psychiatric disorders.

Increasing at a CAGR of around 4.5%, Japan is projected to provide an incremental $ opportunity worth US$ 1.1 Mn by 2031.

Orphan drugs are medications primarily used for treating rare disease conditions, which include autoimmune, oncology, and genetic diseases. Owing to these factors China‘s market for carglumic acid is set to expand at a CAGR of around 6.6% over the next ten years.

Which Dosage of Carglumic Acid is Highly Demanded?

Moreover, high demand for orally disintegrating tablets can be attributed to their ability to disintegrate in the saliva within a short period of time, which is advantageous for those experiencing difficulty in swallowing.

Which Distribution Channel is Projected to Bolster Sales of Carglumic Acid?

Hospital pharmacies have contributed significantly towards the growth of carglumic acid sales, accounting for around 53% of total revenue share, and are set to create an absolute $ opportunity worth US$ 65 Mn during 2021-2031.

Such surge in sales of carglumic acid through hospital pharmacies can mainly be attributed to patients’ ease and preference for purchase of drugs and reliability of pharmacy stores.

Opting for a mix of organic and inorganic growth strategies such as acquisitions, collaborations, and partnerships, market players are trying to expand their business footprint in high-growth markets. Moreover, these have been identified as positive strategies helping players garner market share over the past half-decade.

How much is the carglumic acid market currently worth?

Currently, the carglumic acid market is worth around US$ 132 Mn.

At what CAGR is the market expected to progress through 2031?

How has the market performed over the past half-decade?

What are the key trends boosting carglumic sales?

Usage of carglumic acid as a repurposing drug for the treatment of various life-threatening diseases has been identified as the latest trend in the market.

How have key players reacted to developments in the market?

Market players are majorly opting for investments in R&D, innovation, and drug development to gain a competitive advantage.

How much market is held by the top 3 suppliers of carglumic acid?

Which are the major countries driving demand for carglumic acid?

What outlook does the North America market provide?

At what rate is the U.S. market for carglumic acid projected to expand?

U.S. carglumic acid consumption is projected to increase at a CAGR of around 6.8% over the next ten years.

Estragole Market is expected to rise at a 5.9% CAGR by 2027. Rising investment in extensive research...