Consumers are showing a growing preference towards investing in beverages that have lower alcohol-based content. This has led to the increasing sales of hard tea. Manufacturers of hard tea are experimenting with hard tea by adding vodka and wine with citrus fruits or berries. This, in turn, is attracting consumers to invest in hard teas.

Historically from 2017 to 2021, the hard tea market observed a mild growth owing to the pandemic. The hard tea market generated a market value of US$ 1.6 Billion in 2021. Moreover, most consumers were trying and getting acquired to the tase of hard tea.

With experimentation of new flavors and penetration of regional and international players across different geographical locations, the demand for hard tea is expected to grow in the upcoming years. Moreover, hard tea companies are making their social media presence stronger to reach a wider consumer base. Thus, the hard tea market is expected to garner a market value of US$ 19 Billion in the assessment period 2022-2032, expanding 9.5x.

The overall fast-paced lifestyle has led to people consuming alcohol in lesser quantities. This is owing to the desire of becoming healthier and keeping track of alcohol intake. This has led to manufacturers offering alcohol-based tea or popularly known as hard tea. Consumers too have shown a growing inclination towards investing in hard tea as it is flavourful and consists lesser alcohol content.

Manufacturers of hard tea are experimenting with hard tea by adding a variety of fresh fruit flavors such as citrus fruits and berries that are organic. In addition, the combination of tea with vodka, wine or beer is attracting consumers to invest in hard tea. Furthermore, manufacturers are focusing to launch region specific hard teas to offer consumers a taste of locally sourced hard teas. All these factors are expected to propel the demand for hard teas in the future.

Increase in health consciousness across all age groups, especially the younger generation has led to manufacturers producing sugar-free hard teas. The health benefits of hard teas are escalating the sales of the same.

Consumption of hard teas reduces the risk of heart diseases, stroke and diabetes. Hard tea companies are offering non-GMO and no preservatives hard teas which have 100 calories. Thus, the healthy nature of hard teas is positively influencing the demand for the same. 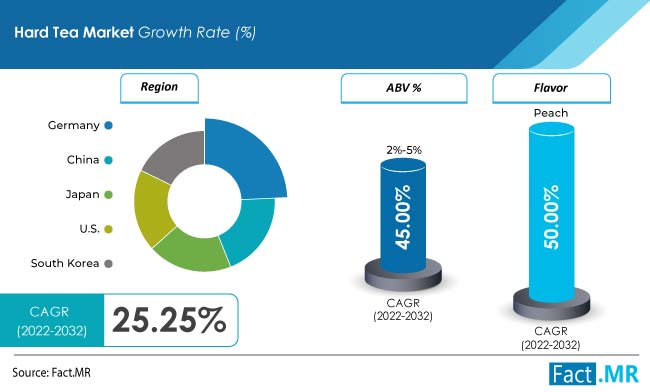 Hard tea manufacturers are grappling with the production quantity and distribution of hard tea as it is still a comparatively newer concept in certain geographical locations. The quantity of alcohol in teas too is a major concern for consumers. Thus, despite of the wide range of ABV’s present in the market, hard tea manufacturers are planning to reduce the alcohol content and make the essence of tea stronger to suit the taste of a wider consumer base.

During and post pandemic, several hard tea manufacturers have emerged in North America, especially in the U.S. This is owing to consumers’ conscious choice to consume less alcohol content. Moreover, the “Dry January” initiative too is leading to people indulging in lesser alcohol-based drink and more hard teas.

Thus, manufacturers in the region are offering a variety of flavors of hard teas. Organic nature of hard drinks is attracting U.S. consumers to indulge in hard teas. Due to the aforementioned factors, the U.S. is expected to register a CAGR of more than 7% for the dry tea market.

The consumption of alcohol-based drinks is prominent in Europe. But, the younger generation has shown a growing preference towards not consuming alcohol or finding alternatives that consumer less alcohol content. Thus, people from Germany are consuming hard tea that have lower alcohol content. Moreover, local and international players present in the region are offering hard tea in a wide variety of flavors.

This has led to a variation of products such as hard tea products that consist of beer, wine or kombucha. Owing to the reasons mentioned above, Germany is expected to register a CAGR of 9% for the dry tea market in the forecast period 2022-2032.

Manufacturers too are paying special attention to displaying sugar levels and carbohydrate content on the hard tea cans. This, in turn, is gaining trust of consumers for investing in hard teas containing 2% to 5% ABV’s. Thus, 2% to 5% ABV’s are expected to hold more than 45% market share in the 2022-2032 forecast period.

Based on flavor type, the global hard tea market is segmented into raspberry, lemon, orange, peach and other flavors. Manufacturers of hard teas are experimenting with a variety of flavors that would entice the taste buds of consumers. This had led to companies using organic flavors and combination of two flavors to make the hard tea stronger. Amongst the different tea flavors, peach is expected to gain prominence in upcoming years.

This is owing to its versatile nature. Peach can be fermented and squeezed and is works as a refreshing drink in the summer season. Thus, peach-flavored hard tea is expected to gain nearly 50% market share for the hard tea market in the assessment period 2022-2032.

What is the Intensity of the Competition in the Hard Tea Market?

As of 2022, the market for hard tea is expected to reach nearly US$ 2 Billion, according to Fact.MR.

Demand for lower alcohol-based beverages along with a plethora of flavors are the key trends driving hard tea sales.

U.S, and Germany are the top two countries driving demand for hard tea.

The hard tea industry is expected to register a CAGR of 7% throughout the U.S.

The hard tea industry is expected to register a CAGR of 9% market share throughout Germany.

*144 figures and 48 tables includes by FactMR