The global hysteroscopes market is valued at US$ 265.5 million in 2022. Worldwide demand for hysteroscopes is predicted to increase at a CAGR of 5% and reach a market valuation of US$ 432.5 million by the year 2032.

An endoscope is used during a hysteroscopy procedure to inspect the uterine wall. Three components make up a hysteroscope: a light source, a tube, and a lens, which is typically a tiny camera and fiber optics. Both rigid and semi-rigid types can be distinguished by tube flexibility.

A hysteroscopy is also utilized to examine the uterus to diagnose anomalies such as heavy bleeding, excruciating cramps, recurrent miscarriages, difficulties getting pregnant, and endometrial malignancies.

Rising prevalence of endometrial cancer is likely to boost the sales of hysteroscopes during the projected period.

The sector is also flourishing as a result of rising demand for minimally-invasive diagnostic and therapeutic tools and technological advancements in hysteroscopes to develop advanced features.

Thus, rising cases of endometrial cancer, technological breakthroughs, and rising demand for minimally-invasive surgical procedures are expected to boost the production of hysteroscopes.

Major hysteroscope suppliers in European countries such as Germany and the U.K. continuously focus on launching advanced hysteroscopes. Karl Storz GmbH & Co. KG is one of the top producers of hysteroscopes in the region.

What is Aiding Growth of the Demand for Hysteroscope Devices?

Growths in the uterus' inner lining (endometrium) are known as uterine polyps. They extend inward into the uterus and are joined to the endometrium by a narrow stalk or a large base. Although uterine polyps are often noncancerous, if left untreated, they may affect fertility or menstruation.

Also, uterine fibroids are the most common ailments experienced by females. Obesity, early onset of menstruation, and late age of menopause are some of the reasons behind them. Uterine fibroids may rarely transform into a cancerous tumour. Hysteroscopic myomectomy procedures are suggested by doctors for the treatment of submucosal fibroids

Thus, the rising prevalence of uterine fibroids and uterine polyps is expected to boost sales of hysteroscopes.

Thus, the rising incidences of abnormal uterine bleeding, heavy menstrual bleeding, irregular spotting between periods, and bleeding after menopause among women are some of the factors supporting the growth of the hysteroscopes market.

Which Challenges are Faced by Hysteroscope Device Producers?

“High Product Cost & Chances of Side Effects of Hysteroscopy Procedures”

The high cost of hysteroscopy, the rising risk of side effects from hysteroscopy procedures, and the availability of alternative options for the diagnosis and treatment of gynaecological conditions are some of the factors that will hamper the global hysteroscope market growth.

Furthermore, increasing infrastructural gaps for surgical procedures in developing nations and a growing shortage of gynaecologists will pose additional challenges to hysteroscope suppliers. 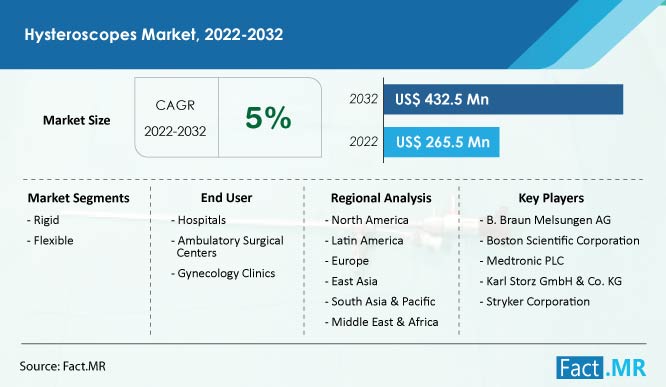 Why are Suppliers of Hysteroscopes Attracted to North America?

Countries in North America such as the United States and Canada have sophisticated healthcare systems. As a result, there are considerable investments made in the research and development of technologies that are less invasive and more efficient.

Rising cases of uterine or endometrial malignancies in the North American region are increasing the demand for diagnostic hysteroscopes.

As a result, there will be a greater need for diagnostic and therapeutic hysteroscopy equipment for uterine or endometrial cancer treatment, which will accelerate hysteroscopy instruments market growth in the region.

What is Accelerating Sales of Hysteroscopy Systems in Asian Countries?

Demand for hysteroscopes in Asia Pacific countries such as India, China, Japan, and South Korea is increasing due to factors such as rising cases of uterine cancer, awareness regarding personal hygiene care, respective government initiatives for reimbursement, and rising incidences of infertility & other associated disorders.

For instance, gynecologic cancer is becoming more common in Japan, and this condition has gained top rank in terms of mortality.

Will Rising Number of Myomectomy Procedures Push Sales of Hysteroscopes?

Treatments for a variety of clinical disorders, including protracted infertility, and uterine fibroids, include hysteroscopy. This process is useful in determining the reason for repeated miscarriages. It aids in assessing female pelvic pain as well.

In some instances, surgical hysteroscopy is also used to remove adhesions, which are uterine scar tissues. Diagnostic hysteroscopy can also be used to do an operational hysteroscopy, preventing the need for additional surgery.

Why are Hysteroscopes Most Widely Used by Hospitals and Gynecology Clinics?

Hospitals and gynecology clinics currently dominate sales of hysteroscopes. The presence of diverse medical equipment and skilled doctors, together with the increased number of hospitalizations for treating gynaecological problems, are driving up demand for hysteroscopes.

Thus, the availability of advanced and effective treatment at affordable cost increases the demand for hysteroscopes from hospitals and gynecology clinics.

Top firms already hold a dominant foothold in the industry and create strong competition for new entrants. They are investing heavily in research and development to produce improved hysteroscope devices.

Global sales of hysteroscopes are expected to reach US$ 432.5 million by 2032.

Demand for hysteroscopes is predicted to rise at a CAGR of 5% during the next 10 years.

Rigid hysteroscopes are popular and their demand is expected to increase at a CAGR of 6% during the forecast period.

Currently, worldwide sales of hysteroscopes are valued at US$ 265.5 million.