The global insoluble fiber market is projected to expand at a CAGR of 6% over the 2021 to 2031 forecast period, with demand for use in functional food & beverages the highest.

Dietary fiber, generally referred to as roughage, is a type of carbohydrate present in plants. It is a type of plant-derived food that generally passes through the digestive track without being digested or breaking down. They are generally classified into soluble and insoluble fibers.

Insoluble fiber aids in promoting bowel health and is also said to possess many health benefits if consumed in limited quantity. Owing to increasing inclination of people towards healthy diets and being fit, demand for the product is set to rise over the coming years.

Demand from diabetic patients is also anticipated to propel the market to greater heights and open new avenues in the years to come. Demand for insoluble fiber in pet food is also seeing a gradual rise.

In the recently published revised report of Fact.MR, all key factors driving demand for insoluble fibers for a forecast period of ten years are discussed in detail. The report illustrates market penetration by categorizing it into various segments.

The report also provides trends of regional demand along with key countries leading the way for market growth. Impact of the COVID-19 pandemic has also been explained in detail in the report.

In 2020, this industry was mildly hit by COVID-19 in 2nd and 3rd quarters. Slight decline in demand for insoluble fibers was noticed due to closure of countries’ borders and economical pause.

However, soon after lockdowns were lifted, the economic curve resumed to grow, causing the insoluble fiber industry to get back on track. In fact, demand witnessed an upward surge, more than usual, owing to increased awareness amongst the public regarding the health benefits of dietary fibers.

In FY 2021, the market is anticipated to observe increased demand and is set to witness the same in the long-run forecast period as well. Overall, for 2021-2031, the market is expected to expand at a CAGR of 6%.

Why is Functional Food and Beverages End Use Piloting demand for Insoluble Fiber?

Functional food and beverages is one of the significant end-use applications that holds widened opportunities for insoluble fiber manufacturers. Insoluble fibers are used in various food products and beverages that witness high demand. Vegetables, fruits, seeds, nuts, and grains are some of the products that are usually considered as functional foods and fortified with various nutrients.

Increasing awareness regarding the health benefits of dietary fibers is allowing the functional food and beverages segment to hold an upper hand in driving demand for insoluble fiber. 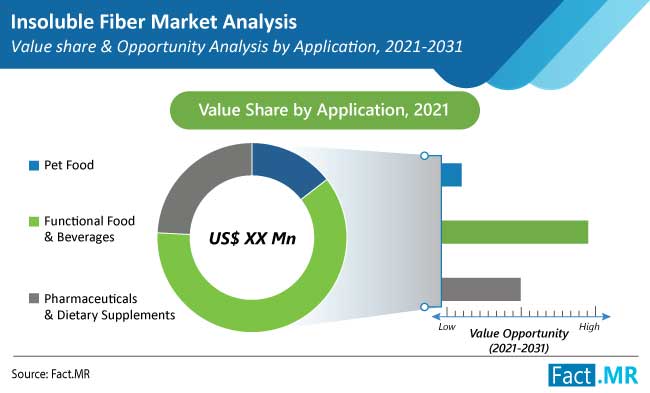 Why is Consumption of Insoluble Fiber Foods High in the U.S.?

Also, awareness among the public in the U.S. regarding the health benefits of dietary fibers is high, which pushes the nation to be the crown bearer of this market space. 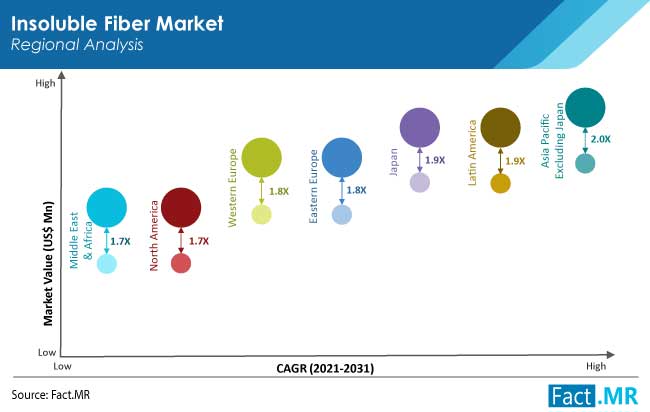 Is Germany expected to Contribute Higher Market Share in Europe?

Germany is expected to hold nearly 24% share in Europe’s market for insoluble fibers, owing to its use in making pasta, bread, nutritional bars, and other supplements, which are consumed a lot in the country. Manufacturers in the country supply cellulosic fibers to various end-use industries such as functional food and beverages, pharmaceuticals, pet food, and others, which leads to the product experiencing higher demand. These end-use industries are observed to be growing at a high CAGR, which will increase consumption of insoluble fibers and obviously lift Germany’s market share in the region.

Population of China is one main reasons behind huge change in the consumption of insoluble fibers. Another factor contributing to such a massive change is the inclination of the public towards dietary fibers. Inclusion of insoluble fibers in the diet is a must to have a good health status and avoid health problems associated the digestive track.

Inclusion of insoluble fibers in the diet by the public in China coupled with its high population is set to launch the market to greater heights and showcase a drastic change in market value over the forecast period.

Why Does Cellulose Hold More Than Half Market Share?

Under product, cellulose accounts for more than 56% of the market value. Cellulose is included as an insoluble fiber derived from plants. Cellulose holds the pivot point in demand of insoluble fibers due to its ability to be modified and used as a food additive, pill binder, or laxative. Also, cellulose aids in weight loss and controls blood glucose levels, which boosts its consumption and contribution in the market.

Which End-use Application Accounts for High Demand for Insoluble Fiber?

Functional food and beverages, as an end-use application, accounts for a high market share, and is also considered to possess high potential in future. Growing awareness of healthy diets and good health status, and rising demand for functional foods with proper nutrients, are expected to propel market expansion. COVID-19 has led more people to stay fit and maintain a proper diet, and this trend is expected to bolster demand for insoluble fiber foods in the years to come.

What are the Significant Barriers for Insoluble Fiber Manufacturers?

Fact.MR has profiled the following prominent manufacturers of insoluble fibers in its report

What is the estimated CAGR for the Insoluble Fiber Market from 2021 to 2031?

By product, cellulose accounts for more than 56% of the market value.

Functional food and beverages, as an end-use application, accounts for the highest market share.

Mesophilic Bacteria Market is set to witness healthy growth by 2028. The high demand for dairy produ...