Consumer electronics accounts for around 28% of global electronics connection technology share. Apart from wired connectors, which hold a major share, solder and conductive adhesives also have a significant market share.

Foremost objective of the report by Fact.MR on the anisotropic conductive film market is to pitch insights on the purchase growth scenario, demand generators, and development strategies in this space. The report provides a taxonomy elaborating on key segments.

The report also outlines visionary insights on the market dynamics, including the drivers, restraints, opportunities, trends, and pricing analysis, along with key success factors. Demand trends have been tracked in 20+ high-growth countries, pointing towards countries in East Asia, Europe, and North America holding bulk of the share.

Historically from 2016 to 2020, anisotropic conductive film use increased at around 7% CAGR, and the key factor assisting this growth is its advantages over traditionally used electronic adhesives, including soldering.

For instance, its chip bonding system process does not require any cleaning later on unlike soldering that requires flux application, reflow, and then part cleaning, resulting in time and money savings. However, cleaning of parts before the application of anisotropic conductive film is required to remove any contamination from the surface. Otherwise, anisotropic conductive film is flux-free, eliminating the contamination risk of flux used in soldering connections.

The market is forecasted to expand at the CAGR of nearly 11% over the coming 10 years. Prime factor influencing growth is rising electric vehicle sales, which use anisotropic materials for multiple purposes.

Also, with the launch of 5G technology, demand is expected to rise due to its ability to provide effective connection over high speed transmission lines. Apart from this, increasing miniaturisation in electronic devices is resulting in the requirement of finer pitch adhesives. This enhances the opportunity for anisotropic conductive film manufacturers to increase the sales of electronic interconnecting tools.

What are the Key Opportunities for Anisotropic Conductive Film Manufacturers?

Numerous challenges are arising with technological advancements in electronic devices. To make conductive connections in these devices, new demands have arisen from electronic component manufacturers, such as for film that can connect the metal foil of electromagnetic shielding parts to non-heat-resistant components.

Two key requirements in making such improvements are low-temperature and low-pressure connections to electrodes and high dimensional stability before and after the connections. Since anisotropic conductive films are more effective than soldering for low-heat resistance components, improving the properties of anisotropic conductive film would provide new sales opportunities for manufacturers.

Another key opportunity enhancing demand for anisotropic conductive film is 5G wireless or mobile networks, which is the proposed next-generation telecommunication standard. The industry is expected to reach over US$ 600 Bn by 2025. This standard is based on mm-wave communications with a wave length of 1-10 mm in the frequency range of ~30 to 300 GHz. It is estimated that around 50 billion devices were connected to the Internet in 2020, which has resulted in high density of connected devices per unit area, and requires high data speeds.

Key system technologies that 5G technology would enable include Wi-Fi Cellular and Backhaul Communications, Vehicle-to-Everything (V2X) communications for ADAS, Internet of Things (IoT), Massive MIMO, and Cognitive Radio, which will ultimately heighten demand for anisotropic conductive film and offer increased opportunity to manufacturers to grow alongside.

Which Region Offers Larger Opportunity for the Sales of Anisotropic Conductive Film? 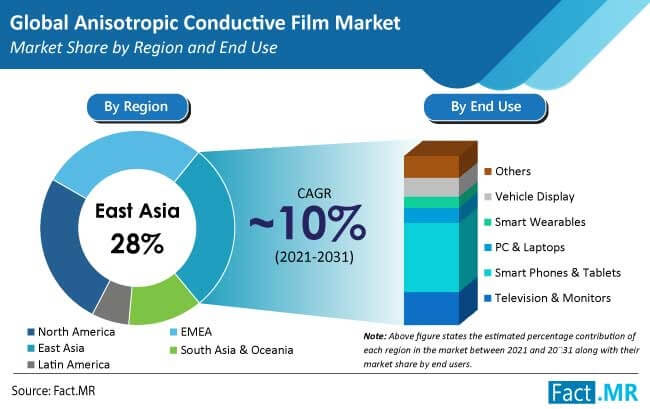 What Makes Japan the Hub for Anisotropic Conductive Film Demand?

Japan has had a well-established electronics manufacturing industry since decades. In the 1960s-70s, Japanese companies have even surpassed the United States for manufactured electronic sales by producing quality as well as inexpensive electronic devices. Two top players providing anisotropic conductive film - Showa Denko Materials and Dexerials Corp. - are headquartered in Japan. Collectively, these two manufacturers cater to 70% of global anisotropic conductive film demand. The country also has very efficient distributors network, which aids manufacturers in exporting their products overseas.

Japan currently holds a share of over 29% of East Asian anisotropic conductive film shipments, and is expected to have sales value of nearly US$ 129 Mn by 2031, with its market expected to expand at a CAGR of nearly 12% over the forecast period.

The most promising sector in Europe, especially Germany, favouring the growth in sales of anisotropic conductive film is the automotive sector. Most automobile manufacturing companies in the region, including Volkswagen, Daimler, BMW, Peugeot and Renault, are heavily investing in creating lightweight, high-speed, and more automatic vehicles. These automotive companies are also currently focusing on manufacturing electric vehicles, which is expected to escalate demand for anisotropic conductive film. Other than that, Germany’s focus on creating an efficient healthcare sector similar to other European nations is further boosting demand for these films.

Absolute dollar opportunity in Germany is expected to be close to US$ 50 million over the forecast period, with the market growing at a CAGR of over 7% through 2031.

What are the Factors Aiding Demand Growth of Anisotropic Conductive Film in the U.S.?

North America held around a quarter share of electronic connector sales in 2017, and has experienced stable growth in recent times. The country has strong wired connector demand, evidenced by the strong establishment of numerous big companies such TE Connectivity, Molex, Amphenol, and 3M.

The United States has the highest per capita health expenditure in the world, which crossed US$ 11,062 in 2019. This signifies the growing demand for health equipment (which has a CAGR of more than 4%). With growing demand for medical devices, including display or monitoring devices, in which anisotropic conductive film has a major role, requirement will also rise over the coming years. Also, the country has the largest spending in aerospace, with more than 49% of the global share in 2018.

The anisotropic conductive film market in the U.S. is anticipated to expand at a CAGR of around 10% during the forecast period, with the absolute dollar opportunity for the country expected to be US$ 277 Mn by 2031.

Why is Demand for ACF with Less than 1.25 mm Width Growing?

As electronics devices are becoming even smaller, the assembly process is getting more complex. This creates demand for finer pitch connectors, which incidentally requires small width anisotropic conductive films.

Why are Smartphones & Tablets the Most Promising Application for Anisotropic Conductive Film?

Which Connection Type is More Preferred?

Chip-on-glass or flex-on-glass, which is mostly used in smartphones and tablets, has the highest share in anisotropic conductive films.

How Has COVID-19 Hindered the Sales of ACF?

COVID-19 compelled governments across the world to divert their capital from infrastructural projects to basic survival needs. However, huge demand for display devices has been observed, which has consequently increased demand for anisotropic conductive films. Nevertheless, globally, anisotropic conductive film shipments are expected to incur a loss of over US$ 70 Mn in the year 2020.

What are the Factors Affecting the Price of Anisotropic Conductive Film?

Use of conducting materials such as gold, nickel, and others plays a huge role in the cost of manufacturing ACF. Currently, many manufacturers are focusing on using soldering material in place of expensive metals. However, inside the resin, these metals have better probability of leading to a short circuit.

Other than this, manufacturers are spending heavily on ACF R&D to develop more advanced films. Manufacturers perform a lot of tests to certify the product before dispatching ACF from the warehouse. This further adds to the cost of production. Storing and transportation at a particular temperature is another additional cost borne by supplier/distributors.

Fact.MR has profiled the following key anisotropic conductive film manufacturers in its report: 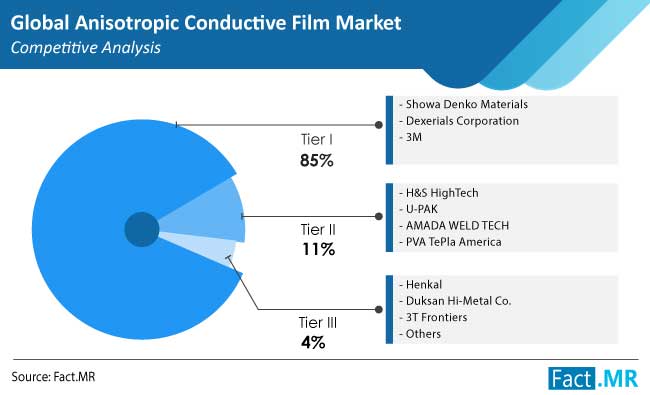 Majority of the companies discussed in the report have focused on establishing subsidiaries in developing regions. Strategies include product launches, collaborations with key players, partnerships, acquisitions, and strengthening of regional and global distribution networks. Some of the key development are:

Similarly, recent developments related to companies manufacturing anisotropic conductive films have been tracked by the team at Fact.MR, which is available in the full report.

What is the expected growth rate for anisotropic conductive films by 2031?

By value, Fact.MR has projected a CAGR of around 11% for anisotropic conductive films sales through 2031. In terms of volume, demand is expected to increase at around 9% CAGR over the same period.

Which region is expected to experience the highest growth?

As per Fact.MR’s projections, South Asia & Oceania countries would experience the highest growth rate. Also, the markets in East Asia and Latin America are expected to experience higher CAGRs.

Which players are prevalent in the ACF Market?

Building Integrated Photovoltaic (BIVP) Market expects a stellar 18.1% CAGR with a US$ 88.6 Billion ...

Film Spray Market is set to witness steady growth by 2029. The growing consumer trend of Do-it-Yours...