Rutile nanoparticles are widely employed in applications that demand pigmentation in bright white colors. Demand for rutile nanoparticles is expected to rise at a high CAGR over the coming years because these particles have superior and improved absorption properties than the other types.

According to Fact.MR, a market research and competitive intelligence provider, worldwide demand for titanium dioxide nanomaterials is expected to increase at a high CAGR of 7.7% from 2022 to 2032.

Continued research and development have also led to many potential applications of titanium dioxide nanomaterials in areas including photovoltaic, photocatalysis, electrochromic, and sensors. Further, new physical and chemical properties are known to emerge as the size of the material becomes smaller, which in turn surges the demand for titanium dioxide nanomaterials.

Significant benefits in products such as sunscreen and moisturizers along with the growing cosmetic industry are expected to favor the titanium dioxide nanomaterials market growth. 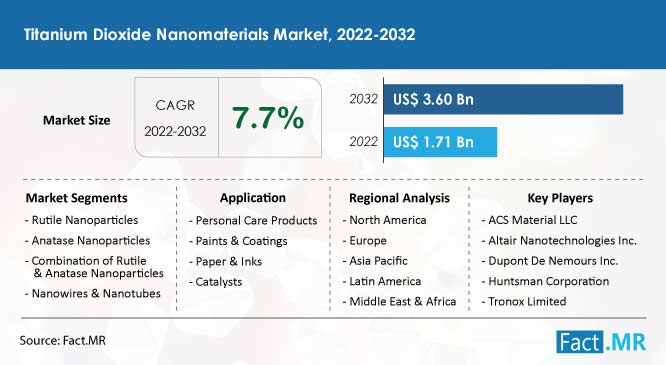 With the development of nanotechnology, research on titanium dioxide nanoparticles saw a substantial uptick, and it was discovered that these materials can be produced using a low-cost procedure. Nanomaterials made of titanium dioxide are used in many different industrial fields. They are mostly utilized in paints, photovoltaics, electrochromic, and skin care products.

Ink manufacturers have been evaluating and reviewing the probable toxic effects of titanium dioxide, the results of which reflected that inks with titanium dioxide nanomaterials are not hazardous to humans.

How are New Companies Making a Space for Themselves in This Industry?

Start-ups are focused on investing in the creation of toxic-free titanium dioxide nanoparticles and the sustainability trend. Emerging companies are using advanced technologies for the development of new products. This is a tactical move used by new entrants to increase their market presence.

Which Region is Most Lucrative for Suppliers of Titanium Dioxide Nanomaterials?

North America accounts for 35.7% share of the global titanium dioxide nanomaterials market owing to the rapidly rising demand for cosmetics. The demand for cosmetics is increasing as per capita disposable income rises. In turn, this is anticipated to stimulate the market for titanium dioxide nanomaterials over the coming years.

The drivers propelling the market expansion in North America are a rise in spending for infrastructure development projects, expanding urbanization, a rising standard of living, a strong automobile industry, and high economic growth.

The rapid expansion of the construction industry and rising initiatives by government organizations for housing projects are driving the market expansion in Asia Pacific. Asia Pacific reflected the high potential for growth of the coatings market owing to the presence of various end-use industries in the region.

Which Application is Likely to Contribute the Most to Titanium Dioxide Nanomaterials Market Growth?

Based on application, the titanium dioxide nanomaterials market is classified into personal care products, paints and coatings, papers and inks, catalysts, and others.

The use of paints and coatings in the automotive industry is increasing with a growing number of passenger and commercial vehicles, especially across emerging nations. In addition, repainting or recoating has gained sufficient traction owing to vehicle rusting issues in this sector. This is expected to positively influence the use of titanium dioxide nanomaterials as they are widely used in pigments that are applied in coatings and paints.

For UV protection and sterilizing objectives, titanium dioxide nanoparticles are widely employed in paints and coatings. Owing to their strong light scattering and high incident light reflection index, they are largely used as white pigments. This has further increased their application scope across various industries such as plastics, textiles, and paper.

The development of novel goods is receiving more funding from the producers of titanium dioxide nanoparticles. Leading manufacturers are putting their efforts into creating new product features to solve various user issues. The focus of key companies is on creating joint ventures to capture a higher market share in novel applications.

The global titanium dioxide nanomaterials market is valued at US$ 1.71 billion.