The solar powered drone operate on solar energy that powered directly through sunlight. The development of solar-powered unmanned aerial vehicles (UAVs) as a less expensive alternative to satellite technology will also fuel industry demand in the years to come. Using solar cells and panels that are built into the aircraft, solar powered UAVs collect solar energy that hits the craft during the day and use it to power the craft or recharge its battery.

The rapid use of drones driven by solar panels for a variety of tasks, such as delivering Internet services or transmitting real-time images, will support market trends for solar-powered drone. Regarding application, the global market for solar-powered drone in agriculture will develop at a significant rate. Farmers' increasing embrace of drone technology to automate crop spraying and lower infestation rates is what driving the market of solar powered drone.

Moreover, the COVID-19 pandemic have also accelerated the usage of machine base technology rather rely on humans. Furthermore, the market for solar-powered drone will have development opportunities due to technical advancements like machine learning and artificial intelligence.

From 2018 to 2022, the global market for solar powered drone registered a CAGR of 8.3% Fact.MR, a market research and competitive intelligence provider, reveals that the market will exhibit growth at 14.1% CAGR between 2023 and 2033. 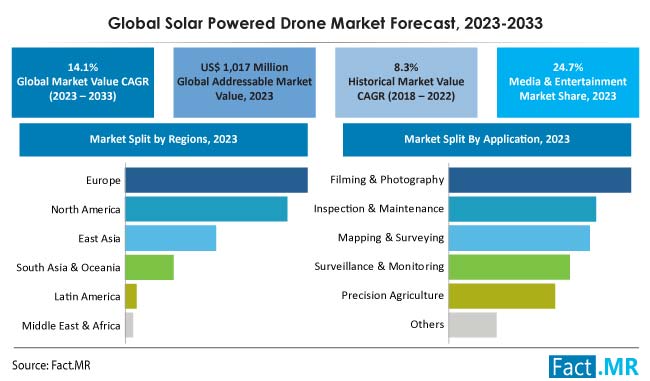 Market share analysis of solar powered drone based on application and region is provided in the above image. Under the application segment, the media & entertainment sub-segment dominates with 24.4% market share in 2023.

The rising awareness of green energy among emerging economy have risen the demand for the use of solar powered drone. Moreover, the increasing government initiative for the sustainable energy have accelerated the demand for solar powered drone. The global energy investment reached at US$ 1.9 trillion in 2021 which rise at 10% compare to 2020. In 2021, the global power sector increase by US$ 820 billion.

In 2021, it was anticipated that USD 530 billion spent on all new generation capacity, with 70% of that amount going toward renewable energy, which currently dominates investment in new power generation. In markets with well-established supply chains, where lower costs are accompanied by regulatory frameworks that provide cash flow visibility and where lenders and financiers who have a thorough understanding of these sectors are looking for sustainable projects to support, renewable investment has thrived. A part has also been played by the corporate sector's demand for clean electricity to achieve sustainability goals.

Therefore, increased awareness for the sustainable energy will increase the demand for solar powered drone.

It is anticipated that the military industry will continue to dominate the market for the duration of the forecast. The military use solar UAV drones for a number of missions, including air combat and ISR applications. Governments, businesses, and other organizations are currently attempting to merge drone technology with cutting-edge breakthroughs like artificial intelligence. In addition to the market-available autonomous drone models, both businesses are investing in the development of new drone types.

In addition, the extensive commercial use of mapping, observation, surveying, and inspection studies is predicted to present a sizeable opportunity for market expansion in the construction sector. In the coming years, the market is expected to expand due to the increasing use of solar powered drone market.

What Do Solar Powered Drone Manufacturer Need to Watch Out?

Season, weather, and location all play a significant role in determining the length and strength of the sun's rays. As a result, manufacturers' ability to operate globally is limited. The producers ought to strive to come up with some creative ways to use the solar drones when there isn't any sunlight.

The market for solar powered drone may also be constrained by high installation costs and the requirement for hiring personnel with specialized training. The aforementioned factors might endanger the producers of solar powered drone’ ability to expand, but these businesses are working hard to find ways to overcome these challenges and take advantage of the current opportunity.

The solar-powered drone in United States is predicted to reach market share of 90% by the end of 2023. United States is highly developed infrastructure followed by support from the government has led to significant growth in the drone industry.

This predicted growth significantly due to the presence of several major manufacturers that are investing heavily in research activities along with increasing pipelines that are creating a plethora of attractive opportunities for solar-powered drone in the country. Thus, United States solar powered drone market is expected to reach US$ 294.5 million by 2023 and expected to reach CAGR 11.5% in the forecast years.

Why is the China Solar Power Drone Market Expected to Be Highly Lucrative?

China has always been considered as one of the most technically sound countries in the world. It is now emerging as one of the countries with the highest market share in the solar-powered drone market in the East Asia.

China has constantly been deploying advanced manufacturing technologies so as to optimize its manufacturing process potential. Increased investment in R&D activities and advanced developments in solar cell technology that will enable increased efficiency of solar cell and battery technologies will positively impact the solar-powered drone market in the country.

Why is the Demand for Solar Powered Drone is Expected to Surge in Media & Entertainment Industry?

However, the market has suffered since the pandemic. Due to social constraints, live entertainment had to end; nonetheless, this increased demand for over-the-top video and data usage, which caused an increase in internet video and television throughout the epidemic. The media and entertainment industry is expected to continue expanding rapidly in the next years.

Therefore, the solar powered drone in media & entertainment industry will have market share of 25% and value of US$ 254.3 million by the end of 2023.

Why is Market Growth Being Led by the Surveillance & Monitoring?

Natural gas, petroleum, oil and gas, energy, and other industries all have high demands for pipeline safety and monitoring. Regular surveillance and monitoring are needed to prevent pipeline damage or prevent from any uncertain accidents. The environment could suffer significantly and be negatively impacted by a leak or break.

There are number of new entrants in the solar powered drone market, owing to highly lucrative market opportunity, the existing market players are scaling their operation. High profitable regions are primarily targeted in order to create higher revenue opportunity.

The global solar powered drone market is currently valued at US$ 1,017 million in 2023.

Filming & Photography solar powered drone accounts for 24.4% share of the global market in 2023.

Worldwide demand for solar powered drone is anticipated to reach US$ 3,803.4 million by 2033-end.