Worldwide consumption of liquid jaggery increased at 4.7% CAGR between 2017 and 2021 and currently stands at a market valuation of US$ 544.8 million.

Detailed analysis by Fact.MR has revealed that the global liquid jaggery market size is poised to expand at a high CAGR of 8.3% to reach US$ 1.2 billion by the end of 2032.

Growth of the liquid jaggery market, including jaggery powder, was restricted to India, specifically Northern India, which is known as a production hub for liquid jaggery due to its traditional acceptance in the region. However, after rising awareness about its health benefits such as an immunity booster, blood purifier, antioxidants, etc., there has been an upsurge in its demand across the world. Additionally, liquid jaggery manufacturers have started focusing on distribution channels, which were initially limited to local regions only.

Liquid jaggery is also known for its antioxidant and mineral-rich properties; as it includes zinc and selenium. Along with this, its sweet winey fragrance and tasty flavour amplify its use in sweet dishes.

The identification of liquid jaggery as a medical sugar for its ability of liver cleaning and improvement of digestion has advanced its use in the health sector.

During the years 2017-2021, the global liquid jaggery market registered a CAGR of 4.7%, and according to Fact.MR, a market research and competitive intelligence provider, the market is projected to witness a growth of 8.3% CAGR during 2022-2032. 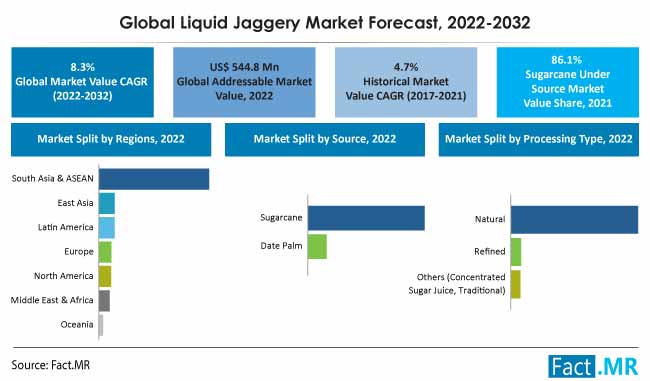 Market share analysis of source, processing, and region is provided in a nutshell in the above image. Under the source segment, sugarcane dominated with 86.1% market share at the end of 2021.

What is the Main Factor Driving Liquid Jaggery Market Growth?

Several health benefits have led to the rising popularity of liquid jaggery among the youth and health-conscious people. Its high antioxidant property helps increase immunity and assists in preventing diseases. Additionally, liquid jaggery is the perfect option for those who want to eat healthy food without compromising on taste.

Liquid jaggery is a healthy natural source and can be used as a substitute for white sugar, which has some negative impacts on health. Jaggery also adds an exciting flavour to daily sweeteners.

Apart from this, a key driver behind the growth of the liquid jaggery market is the escalating diabetic population because of the concentration of the Glycemic Index, which affects blood sugar levels in diabetic patients. These factors are contributing to the rising consumption of liquid jaggery across the world.

“Low Product Awareness & Side Effects of Over Consumption”

Liquid jaggery contains glucose, fructose, and fat; high consumption can lead to weight gain and also cause cold, nausea, stomach aches, cough, and headaches. Also, impure and improper processing can lead to issues with the intestine warm and imbalance in digestion.

Also, due to less awareness about its use and benefits in the global market, manufacturers need to increase awareness among consumers about the benefits of consuming liquid jaggery.

Which Countries are Expected to Exhibit Increasing Demand for Liquid Jaggery?

Liquid Jaggery has a very small market outside the South Asia region. However, spreading awareness about it is expected to drive steady market growth across the African and Latin American regions over the coming years.

Will India Continue its Prominence in the Liquid Jaggery Market?

High inclination towards organic and locally produced food is the main reason driving the demand for liquid jaggery in India. The dominance of India in the global market is also guided by the high presence of key manufacturers across the country.

Sugarcane liquid jaggery dominates with more than 80% market share by source type. This source of liquid jaggery is also expected to be the fastest-growing segment during the forecast period owing to its winey sweet taste attracting more consumers.

Will Liquid Jaggery Manufacturers Do Well through Online Sales Channels?

Liquid jaggery has a very concentrated market in some regions where brand websites and e-Commerce websites play a major role in better product reach on a global scale.

Strengthening international sales and increasing import-export trade can boost the growth of the global liquid jaggery market. Online sales of liquid jaggery are expected to surge at a CAGR of 8.3% between 2022 and 2032.

Liquid jaggery manufacturers are highly fragmented in the South Asia region. However, there are very few manufacturers who have successfully expanded their business on an international scale.

Moreover, market players are more concerned about spreading awareness about liquid jaggery globally so that they can launch their liquid jaggery products successfully in international markets.

Also, increasing production capacity by adopting inorganic strategies such as partnerships and mergers will help manufacturers drive their profit margins. Supplementing sales under the influence of various labels such as organic, iron-rich, antioxidant, etc., is a key path that can be followed for higher success in this market space.

Such initiations will support the awareness and growth of the liquid jaggery market across the world.

What is the global liquid jaggery market outlook?

What was the last 5-year CAGR for the demand for liquid jaggery?

Who are the key manufacturers of liquid jaggery?

Which source of manufacturing liquid jaggery is most preferred?