The global penile implants market is currently valued at US$ 272.4 million. Worldwide sales of penile implants are predicted to increase at a CAGR of 2.2% and account for a valuation of US$ 303.7 million by 2027.

Global inflatable penile implant sales are expected to progress at a CAGR of 2.6% during the next five years and reach US$ 212 million by 2027, attributed to ongoing innovations in inflatable penile prosthesis such as more durable and flexible components.

Modern penile implants were first used more than 45 years ago, but since then they have undergone significant advancements in function and materials science. These devices have continued to be useful and will almost definitely continue to be helpful over the coming years despite the development of highly effective oral medication for ED.

Even while penile implants have a high level of efficacy, there is always room for advancement in both the implants themselves and the procedures and surgical methods utilized to install them.

Modern penile implants are technological wonders with exceptional longevity and great patient satisfaction rates. One of the main factors boosting the market size of penile implants is the rising incidence of erectile dysfunction disorder as a symptom of related comorbidities such as diabetes, liver disorder, renal disease, vascular diseases, and atherosclerosis.

In addition to this, it is anticipated that increased rates of obesity, spinal cord injuries, hormone abnormalities, and heart disease would all contribute to an increase in erectile dysfunction, which will increase the demand for penile prosthesis procedures.

Treatment for these patients aims to regain a functioning penis size to permit gratifying sexual encounters, enable proper standing urination, and enhance the patient quality of life. Many men who want their penises to grow longer actually have normal-length penises, but they nonetheless feel small, this is due to a psychological disorder known as "penile dysmorphophobia." Many men with these conditions undergo micropenis penile implantation surgery to enlarge their penis size.

According to a recent market study on penile implants by Fact.MR, a market research and competitive intelligence provider, global sales of penile implants are expected to expand at a CAGR of 2.2% from 2022 to 2027 and reach US$ 303.7 million by 2027. 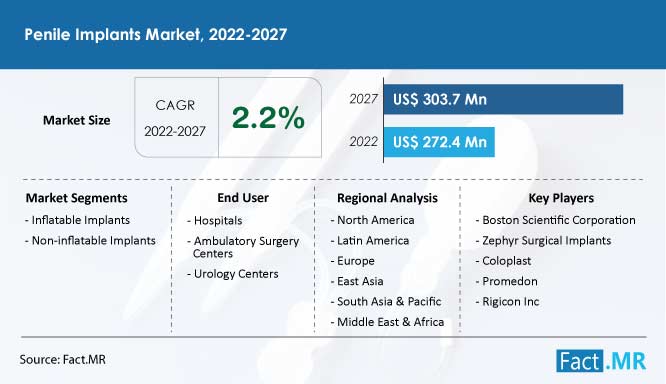 Which Factors are Increasing the Rate of Penile Prosthesis Implantation Surgeries?

Men who have received radiation or surgery for prostate cancer, or who have lower spinal cord damage or other neurological illnesses, also have a higher prevalence of erectile dysfunction. Erectile dysfunction is also linked to pelvic trauma, particularly perineal injuries and fractures.

Due to the technological advancements, less traumatic nature of these operations and the benefits of a quicker recovery, the demand for the surgical procedure of erectile dysfunction with a penile implant have significantly increased.

What Challenges are Faced by Penile Implant Manufacturers?

The risks associated with penile implant inserts, such as infections, embed problems, and internal disintegration, as well as an increase in complaints about penile length loss, too-hard pumps, and improper soreness of the glans of the penis, are anticipated to be a restraint on the growth of penile implants market. Furthermore, the less accessibility of less invasive erectile dysfunction treatment options is also expected to hamper the market growth.

Penile implant market size is also hampered by a lack of knowledge and awareness of treatment procedures, lack of product availability and less accessibility to invasive erectile dysfunction treatment options in some geographic regions.

Which Region Accounts for High Demand for Penile Implants?

North America dominates the penile implants market and is expected to account for a higher market share. The presence of highly advanced surgical equipment & skilled urologists in the region, the rise in preference for outpatient settings for minimal-invasive surgical procedures, the presence of sophisticated healthcare facilities, the rising demand for surgical treatment options for a better romantic life, and a supportive reimbursement framework for medical procedures are some of the factors propelling market growth in the North America region.

Over the coming years, the market in Europe is expected to expand dramatically. One of the main factors influencing the market in the region is the high incidence of various urological problems as well as the increased prevalence of chronic diseases such as diabetes, renal disorders, and more brought on by unhealthy lifestyles, boosting the growth of erectile dysfunction disorders.

Due to rising awareness of penile implant treatments, a sizable population living with erectile dysfunction and the availability of cutting-edge tools and equipment in many nations to perform the procedures on an outpatient basis, the Asia Pacific penile market is anticipated to rise at the highest CAGR.

How is Demand for Penile Implants Evolving in the U.S.?

Erectile dysfunction is frequently associated with ageing and other co-morbid conditions such as diabetes, hypogonadism, and cardiovascular disease. Thus, rising cases of erectile dysfunction are expected to raise sales of penile implants.

Why is Demand for Penile Implants High in China?

In Asian countries as contrasted to Europe, male sexual dysfunctions (MSDs) frequently go undetected and untreated because of strict religious and cultural beliefs, socioeconomic factors, and a lack of understanding. There is a propensity for the use of traditional medications, noncompliance with current healthcare standards, and restricted access to such services.

Male sexual dysfunction is characterised by changes to at least one of the fundamental sexual functions (desire, orgasm, erection, and ejaculation). Hypoactive sexual desire disorder, erectile dysfunction, anorgasmia or difficulty in reaching orgasm, and premature or delayed ejaculation are the most typical MSD-related complaints.

The inflatable penile implants segment is expected to dominate the market throughout the forecast period and reach US$ 212.2 million by 2027.

Most experts agree that inflatable penile implants produce a more realistic flaccid appearance and enable closer simulations of typical physiological erections. A wider segment of the global ED population could obtain inflatable devices due to interventions that lower the cost of implant materials (for example, lower-cost methods to create medical-grade silicone) and/or the arrival of rivals into the market.

What is the estimated growth rate for the penile implants market?

What is the projected value of the market for 2027?

The global market for penile implants is set to reach a valuation of US$ 303.7 million by 2027.

What is the current market value for penile implants?

Global revenue from penile implants is currently US$ 272.4 million.

Who are the top manufacturers of penile implants?

Which product type is highly popular in the market?

Sales of inflatable penile implants are set to increase at a CAGR of 2.6%.

Global pulse oximeters market is estimated at US$ 1.2 Bn in 2019, and projected to witness moderate ...

The COVID-19 pandemic is anticipated to provide possible growth opportunities for the fluid manageme...