The global egg white peptide industry is slated to accumulate US$ 21.2 Bn in revenue by 2022, concludes a revamped estimate of market research and intelligence provider Fact.MR.

As per its report, the industry is slated to reach US$ 36.21 Bn by 2032, surging at a CAGR exceeding 5%. Sales of both tri and di egg white peptide will amount to ½ of the global market.

The global egg white peptide market experienced an upsurge of around 4% in value CAGR terms. The key factors driving the market were high demand from health- and fitness-conscious consumers, as well as the functional benefits of egg white peptide over the historical period.

During the COVID-19 pandemic, sales experienced a considerable incline, attributed to an increased focus on enhancing overall immunity and prevent onset of the infection. Being rich in proteins and amino acids, egg white peptide imparts anti-oxidant and anti-inflammatory benefits, which has the potential to reduce trauma to severely infected patients.

The global egg white peptide market is expected to grow at a CAGR of 5.5% between 2022 and 2032, expected to surpass US$ 36 Bn by the end of the said forecast period. Demand for egg white peptides as a primary animal-based protein continues to grow globally, indicating great promise as a rich source of bioactive peptides that improve human health. Because of their importance as health-promoting food ingredients, the identification of these peptides demonstrates a greater commercialization opportunity.

Is Raising Awareness Regarding Health Expanding the market growth?

Egg white peptides possess properties that help with hair and skin issues, making them an ideal component for cosmetics and personal care products. People prefer and consume a wide variety of skin care creams and lotions, as well as shampoos and conditioners containing egg components. Various Japanese research institutions predict that the increased use of Egg White peptides in the Sports and Nutrition Industry will reach $101 billion by 2040. As a result, it is a highly popular and in-demand venture for new market entrants. Increased demand for Egg White Peptide Market has resulted from increased consumption of egg-based cosmetics.

What are the Favorable Policies Driving the Indian Market?

India is expected to grow at the fastest rate during the forecast period. Factors such as urbanization, western influence on diets, a growing emphasis on leading active lifestyles, and a growing middle-class population with higher disposable incomes in emerging economies such as India are expected to drive demand.

Furthermore, the increase in poultry production in the Indian market increases the availability of eggs in the market. According to data released by the International Egg Committee (IEC) and World Egg Organization (WEO), India is the world's fastest-growing egg producer, which will fuel market growth. A market share worth 28% is predicted for the Indian market.

What Supports Increasing Egg White Peptide Sales in the U.S.?

The United States is the largest consumer of Egg White peptides in the North American region. From pharmaceuticals to cosmetics, from industrial to household, Egg White Peptides are used on a large scale in all sectors.

Egg White Peptide is a low-cost alternative for a variety of products in the Personal Care and Healthcare Sector. Egg White Peptides have provided an effective but organic element in day-to-day food products for this region's health-conscious population. The U.S will likely accumulate a market share of 30% until 2032.

What is the Key Factor Enabling Growth in Germany?

In addition, Egg White Peptide is used to keep the texture of cosmetics, resulting in a longer lifespan for skincare products. Therefore, Germany will witness high demand in the market over the forecast period (2022-2032), accumulating a market share of 29%. 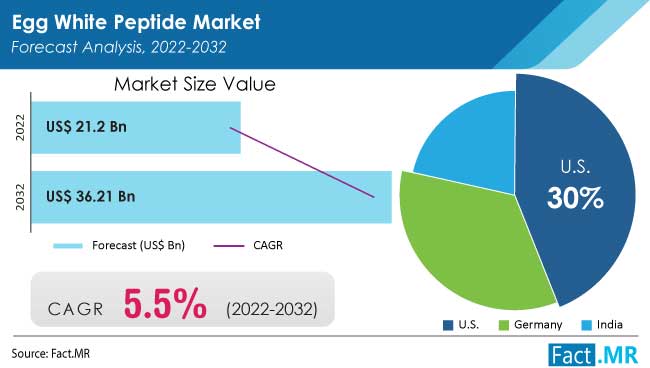 Egg white protein based advanced peptide bonded amino acid formulation have been developed by several nutraceutical and supplement manufacturers which ensure instant delivery of amino acids to muscles. Such developments have been possible due to integration of egg white peptides as an ingredient in newly formulated nutraceuticals and supplements. Suppliers of Di and Tri egg white peptides are optimistic of its uptake by new end users and are formulating long terms strategies accordingly.

According to the report, consumption of both types of egg white peptide, viz. di- and tri-peptides, is almost equal in current market condition, nearing around 44,000 kgs collectively.  Owing to its properties, the demand for Tri-peptides is growing rapidly and by the end of forecast period it is estimated that Tri-peptides will account for 50% of the total egg white peptide consumption.

Protein is constantly required by various body organs such as the brain, lungs, and tissues. As a result, there is a greater demand for energy-boosting drugs based on egg white peptides. A CAGR of 5% is projected for the pharmaceuticals sector.

The U.S is expected to emerge as the kingpin of egg white peptide demand, generating a market share of 30%

Yes. India is anticipated to accumulate a market share worth 28% in the egg white peptide industry

*121 figures and 88 tables includes by FactMR