Consumers are continuously focusing on following a healthier lifestyle, and have myriad concerns about the safety of the food they consume. This has driven companies in the market to research nutrient-rich food & beverage products, along with supplements like egg yolk lecithin which contain natural ingredients.

This trend is further fuelled by rising number of people ailing from various diseases across the globe, for which people seek sustainable and inexpensive alternatives for added immunity against these diseases.

One such alternative is egg yolk lecithin, which was discovered and isolated way back in 1846 by Theodore Gobley.

Egg yolk lecithin has found significant demand from the pharmaceutical industry, riding on its nutraceuticals ability, promoting recovery from liver and neurological disorders. 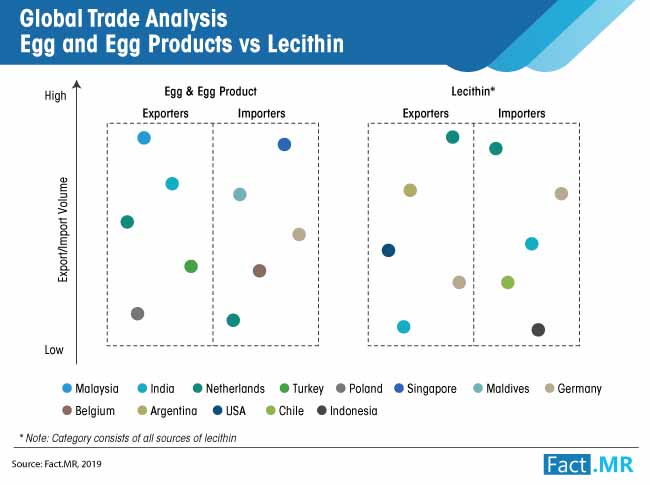 Other industries where egg yolk lecithin finds application in significant quantities is food & beverages, cosmetics & personal care, and animal feed. The decline noticed in the demand for whole-grain bakery products, particularly in developed economies of North America and Europe shall constraint the growth of egg yolk lecithin market in the forecast period.

The study by Fact.MR reveals that the egg yolk lecithin market value shall register an impressive CAGR ~ 6% during the forecast period of 2019-2029.

The demand for enzyme supplements have shown a northward trend, further pushed by regulatory support from agencies such as European Commission and food & drug departments of various countries such as the USA, India, and Japan, which in turn shall magnify the growth of egg yolk lecithin market.

Several studies conducted by organizations such as WHO and WFP (World Food Program) suggest that cardiovascular diseases are the largest fatality causing ailments in the world.

Around 17.7 Mn people across the globe died from CVDs in 2016, representing more than 30% of all global deaths that year. The major risk factors causing CVDs are hypertension and obesity. The changing dietary patterns and sedentary lifestyle of people further increases the risk of CVDs in individuals.

Egg yolk lecithin can also be used in keto-based diets, as it is a fat. Despite being high on fats, egg yolk lecithin has been associated with weight-loss benefits due to its characteristic of breaking other larger fats into smaller molecules, which are to be utilized as an energy source rather than as a fat deposit. These consumer behavioral trends shall further continue to boost the egg yolk lecithin market.

Egg prices across the globe have always seen an oscillating behavior affecting the egg yolk lecithin market to a great extent. The report from USDA reveals that egg prices have even reached US$ 2.39/dz. in Aug 2015. They have also shown the low mark of US$ 0.51/dz. in Oct 2016. Indian egg prices fluctuated between INR 350/100 eggs to INR 450/100 eggs in the month of September 2019 according to National Egg Co-ordination Committee.

The price of eggs is also seasonal in nature, where it is seen to rise in winter due to increased consumption across the globe along with a decrease in production. These fluctuations are causing diaphragmatic fluctuations in the egg yolk lecithin cost, impeding the egg yolk lecithin market. The consumption of egg has also seen a steep increase during the recent past, raising the cost of eggs. 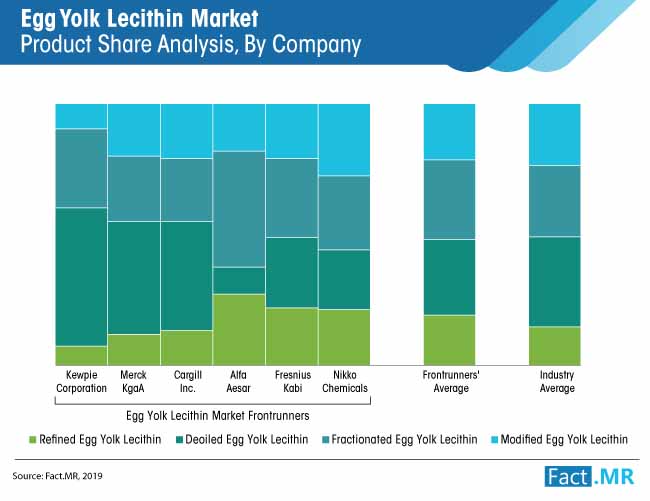 Egg yolk lecithin acts as a powerful emulsifier, employed for stabilizing emulsions, such as mayonnaise and hollandaise sauces. The current regulations in many countries such as India and the USA, require food and drug companies to provide products with detailed labels regarding the ingredients used and the nutritional information of the product.

These labels provide consumers insights about the materials they are consuming and its effects on their body. This is further fortified by ample amount of information available on the internet regarding various ingredients, such as egg yolk lecithin, consumed via food and beverages.

Majority of consumers have opted for non-GMO ingredients, such as egg yolk lecithin, as science suggests potential risks from GMO products such as increased allergies, and several digestive ailments, which can grow into complex disorders. Additionally, egg yolk lecithin is preferred over vegetable and soy sourced lecithin, as they comprise of enzymes, which inhibits the digestion of carbs and proteins.

The nutraceutical industry has shown quite an upsurge in the past decade bolstered by demand from consumers for healthier alternatives like egg yolk lecithin based products to pharmaceutical drugs. From fortified foods to diet supplements, all verticals are leveraged by medical and science professionals to provide consumers with nutritional products inclusive of egg yolk lecithin, particularly in developed economies, where people have higher purchasing power for such ingredients.

Demand for egg yolk lecithin, complemented by rapid growth of the nutraceuticals industry, has seen a sharp rise in the past half-a-decade in developing economies too. This is on account of increasing consumer spending in these regions on health and related products like egg yolk lecithin.

The companies in the egg yolk lecithin market have employed intelligent strategies to establish themselves as the monopoly holders in the market with strategic acquisitions and geographical expansion into newer markets.

Merck KgaA acquired around 5 companies in the last 5 years in a bid to increase its production and technological capabilities. The company acquired Intermolecular Inc., in Sept 2019, Bssn Software in Aug 2019, and Versum Materials Inc. in April 2019.

Another key player in the market, Cargill Inc. strategically invested in Asian and Latin American markets, so as to improve its footprints in the egg yolk lecithin markets in these regions. The company recently invested more than US$ 500 Mn in various Asian markets including Singapore, Thailand, and Philippines etc.

Cargill also invested $150 Mn in 2018 in the Brazilian market to become one of the largest food ingredient company in the region.

Continuous research is carried out, both by corporations and individuals to utilize egg yolk lecithin to its full potential. One such example of such research is development of anesthesia for dogs carried out in 2014.

Researchers have also developed lecithin-based nanoparticles, which may prove to be a breakthrough product causing a tectonic shift in the realms of egg yolk lecithin market.

Current and future prospects for the global egg yolk lecithin market, containing current, as well as future, projected values forecast, price index and analysis on region-wise trends have been included in the report.

Analysis offered on the factors mentioned above is comprehensive, and dedicated weighted chapters have been delivered on the same.

The global market is set to witness impressive CAGR 6% by the end of forecast period.

The global market is segmentated on the basis of form, product, end use industry and regions.

*143 figures and 56 tables includes by FactMR