As the global healthcare fraternity increasingly shifts towards natural medicine, demand for plant-based products is rising, a key catalyst for compound houttuynia market growth, registering nearly 10% CAGR from 2016 to 2020.

Prospects appeared highly promising during the COVID-19 pandemic, with several studies pointing towards the highly potent anti-inflammatory properties possessed by the houttuynia genus, which could provide much needed relief to patients afflicted by SARS-CoV-2. From 2021 to 2031, demand is slated to witness a sharp incline, expanding at over 10% CAGR to reach a multi-million dollar valuation.

Gastric cancer is one of the most common malignant tumors in the world, the prevention of which is advocated by virtue of strict diet control. Houttuynia cordata is thus considered an effective remedy in this regard, especially through its heat treatment properties.

Heat treatment through the consumption of houttuynia cordata is being explored, which can inhibit SCG-7901 cells, the primary cell line responsible for inducing gastric cancer. In addition, the plant is also effective in treating colorectal and leukemic cancer. Hence, uptake of compound houttuynia shall increase in forthcoming years.

Houttuynia cordata Thunberg (HCT) is a perennial herbaceous plant which grows in the wild, moist and shady locations in Asian countries, including India, China and Japan. It possesses anti-bacterial, antiviral, immunostimulant and other anti-inflammatory effects.

These plants are anticipated to prove highly effective in treating conditions such as hand, foot and mouth disease (HFMD), SARS, herpes simplex virus (HSV), pseudorabies herpesvirus (PhV), dengue virus and lots of other ailments. Hence, its scope as an anti-inflammatory remedy is bound to increase in the future. 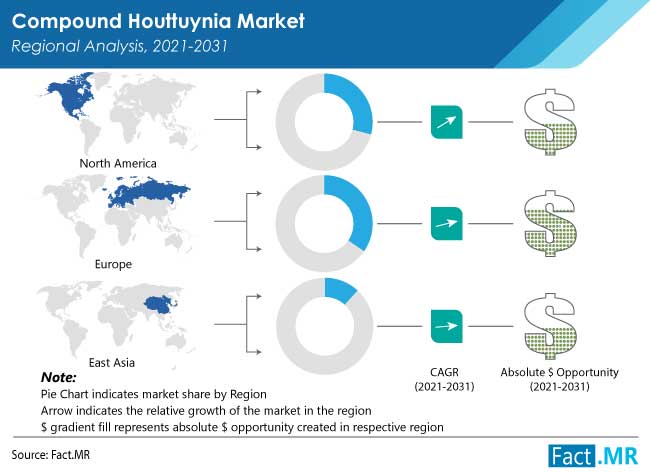 Why is China Considered the Global Compound Houttuynia Hotspot?

China is expected to remain the epicenter of the global compound houttuynia demand in forthcoming years, likely to register a CAGR of approximately 7% until 2031. Extensive applications in Traditional Chinese Medicine (TCM) is likely to bolster said growth.

Houttuynia cor data was used in TCM in an attempt to treat the severe acute respiratory syndrome (SARS) and various other disorders. Although current studies are inconclusive about its potential benefits, future prospects appear bright amid ongoing clinical trials and experiments.

Will India Generate Promising Growth Opportunities for Compound Houttuynia in the Future?

Ever-growing burden of respiratory diseases are expected to open up new growth frontiers across India, which is likely to account for 30% of the revenue share through 2031. Several healthcare providers are investigating alternative medicine to address this burden.

According to a LANCET study, chronic obstructive pulmonary disease (COPD) and asthma were responsible for 95% of chronic respiratory disability adjusted life years (DALYs) in India as of 2016. COPD prevalence rate more than doubled to reach 55 million compared to 1990. Hence, extensive research to develop potential cures will likely heighten growth prospects.

How is the U.S Expected to Emerge as a Potential Market for Compound Houttuynia?

The U.S is anticipated to generate substantial demand for compound houttuynia products, registering a CAGR of around 5% across the 2021-2031 forecast period. Growing importance of complementary and alternative medicine is likely to fuel expansion prospects.

According to a government survey, 36% of U.S adults ages 18 years and older prefer some form of complementary and alternative medicine. As per this practice, natural products usage such as herbs account for 19% of total usage amid growing concerns over conventional medicine, especially regarding potential side effects of allopathic medicines.

Why are Compound Houttuynia Capsules Surging in Demand?

Compound houttuynia capsules are purported to be highly effective against common viral illnesses such as hand, foot and mouth disease (HFMD) as well as SARS and herpes.

The compound houttuynia landscape appears to be highly consolidated, characterized by the presence of a majority of Chinese manufacturers. Offering new products remains the primary strategy of the market players.

How will the global compound houttuynia market expand across the 2021-2031 forecast period?

According to Fact.MR, demand for compound houttuynia products is expected to incline significantly, registering a CAGR exceeding 10% across the 2021-2031 forecast period.

Which is expected to be the most promising market for compound houttuynia?

China is anticipated to remain the epicenter for compound houttuynia products, given its extensive application across Traditional Chinese Medicine (TCM). The market here is expected to expand at approximately 7% CAGR across the assessment period.

Which compound houttuynia product type is expected to emerge the strongest through 2031?

Fact.MR anticipates demand for compound houttuynia capsules to surge at a CAGR of around 10% across the 2021-2031 assessment period.