Worldwide consumption of cryogenic ethylene is estimated at US$ 4.78 Bn in 2022. Detailed industry analysis has revealed that, the global cryogenic ethylene market is forecast to reach a valuation of US$ 11.53 Bn by 2032, expanding at a CAGR of 9.2% during 2022-2032.

As per the latest analysis by Fact.MR, cryogenic ethylene consumption is set to to account for nearly 8% of the global ethylene market value in 2022.

Over the past half-decade, cryogenic ethylene demand has observed bubbles and busts on the back of supply chain disruptions and force majeure across the world. Moreover, a decline in the price points of more than 30% has been observed in 2020, post constant strengthening of the price points over 2017-2019. In 2021, price points danced in accordance with the demand surge, which pushed the ceiling price up by 50% as compared to 2020. 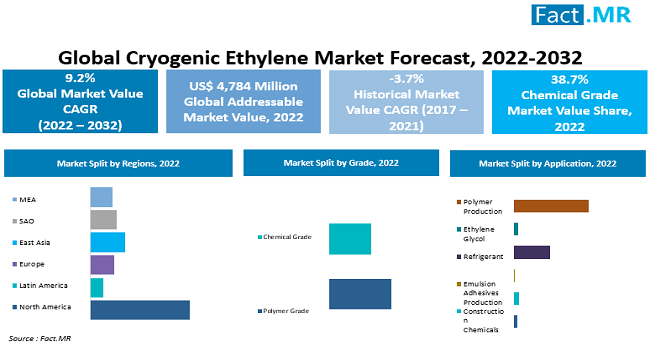 As per latest market analysis by Fact.MR, a market research and competitive intelligence provider, market value for cryogenic ethylene over the past half-decade plunged at a CAGR of around -3.7%., on the back of huge ethylene price slumps across regions of the world. Apart from the price points, decline in demand in 2020 due to the COVID impact also affected overall market growth across the world.

Over the forecast period, i.e., 2022-2032, cryogenic ethylene demand could be comprehended in three phases - short-run, medium-run, and long-run, for better understanding.

The United States is anticipated to dominate the demand and supply of cryogenic distillation ethylene on the back of gaining an upper hand in LNG exports and the strengthening of supply contracts of LNG with Europe, over this time period.

Medium Term (2025-2028): Over the medium term, cryogenic ethylene demand is anticipated to slow down across the globe, expect in the United States, owing to the siphoning of gas supply contracts with strong sanctions imposed on Russia.

Long Term (2028-2032): Slow to moderate market growth is anticipated to be observed over this period of time.

Why is the U.S. Gaining Traction in the Global Cryogenic Ethylene Market?

The United States is the world’s prominent exporter of LNG with 21 MMT as of Q4 2021. Domination in LNG exports is due to the shale oil revolution in 2016. From the lower ranks in terms of LNG supply in 2016, the country is now self-sufficient in LNG as well as a global leader of LNG supply.

LNG supply is filled with hurdles owing to its transportation; therefore, before feeding LNG to the carriers, manufacturers liquefy the LNG using C3 cryogenic propylene or cryogenic ethylene. Utilization of cryogen for liquefaction is a multi-stage process and significant amounts of cryogen is circulated for a stipulated time period. This provides optimum temperature for LNG for liquefaction.

Post liquefaction, LNG has to be constantly placed under the cryogen (ethylene or propylene) for the maintenance of temperature of the LNG.

Owing to the aforementioned factors, rise in the production and exports of LNG will propel demand for cryogenic ethylene at a CAGR of 9.5% in the United States over the long-term forecast period.

Why is China Anticipated to Gain Share in the Global Cryogenic Ethylene Market Over the Forecast Period?

“Integration of Petrochemical Units in China to Act as Market Driver”

Rapid integration of petrochemical units in the country coupled with dynamic changes in the polymer industry is anticipated to propel demand growth of cryogenic ethylene at 10% CAGR in China over the forecast period.

In 2020, demand declined by 3% points, which is better than the demand decline observed across the globe. This provides an image of strong trade foundation, coupled with strong floor and ceiling price points in the country.

Furthermore, rising demand for LNG in the country and expansion of existing LNG terminals will bolster demand for cryogenic ethylene for liquefaction application.

Why is Refrigeration Anticipated to Act as Wedge for the Cryogenic Ethylene Market?

EPA under section 608 of the US Clean Air Act forbids individuals from using HCFC-22, HFCs, and R-410A, which are ozone depleting. Moreover, the United States is anticipated to ban R134a, R410A, and R407C from utilization in chillers from 2024 onwards. This is set to open the doors for environmental-friendly non-halogenated hydrocarbon-based refrigerants.

Moreover, pressure from international conventions such as Kyoto protocols have bolstered the usage of non-halogenated hydrocarbon-based refrigerants. This factor is anticipated provide 2.5X growth to cryogenic ethylene refrigerant application over the time period of 2022-2032.

Why Will Polymer Production Hold Strong Ground Despite Increase in Demand for Refrigerant Application?

Polymer production, especially polyethylene, will hold a strong market share over the forecast period and is set to grow 2X by 2032 as compared to 2022.

Currently, worldwide cryogenic ethylene sales are valued at US$ 4.78 billion.

Cryogenic ethylene consumption value is expected to increase at a CAGR of around 9.2% during the period of 2022-2032.

Sales of cryogenic ethylene in China are estimated to hold around 10% share of the global market.

*132 figures and 79 tables includes by FactMR