Other bundled advantages such as non-flammability and ability to incorporate effective stabilizing systems during vapor degreasing operations are set to aid the expansion of the trichloroethylene market size over the forecast period of 2020 to 2030. Despite its exceptional solvency and cleaning efficiency, trichloroethylene is identified as carcinogenic in nature, which has restricted its demand to some extent in recent years.

After hydrofluorocarbon production, trichloroethylene is highly utilized in metal cleaning and vapor degreasing applications, but increasing stringent regulations to restrict its exposure limit have affected its consumption. However, increasing demand from niche applications such as chemical processing, coatings, and adhesives are set to assist market growth. 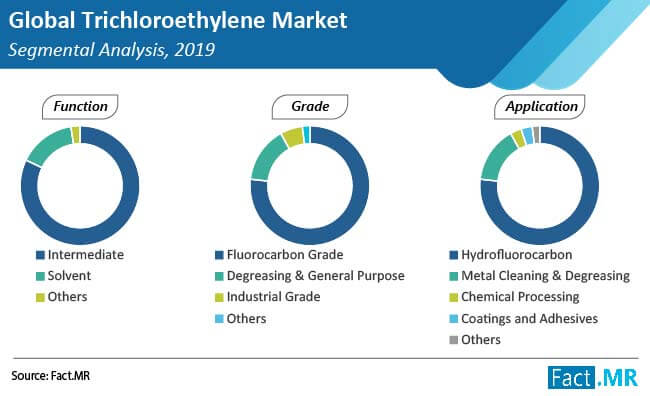 Developed regions such as Europe and North America have reduced the consumption of trichloroethylene, owing to stringent regulations passed by the European Union and EPA. For instance, in Europe, trichloroethylene is classified as a category 2 carcinogen and has been banned in 2016, due to which, the European market will experience a declining growth rate. 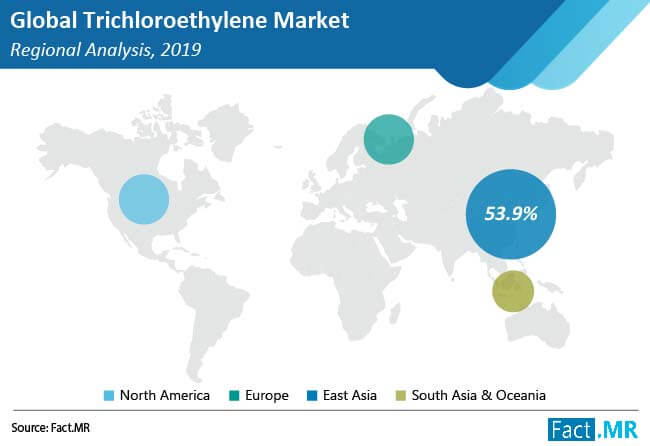 The global trichloroethylene market is highly consolidated in nature, where the top players currently account for over half of the sales. Currently, AGC Inc, Olin Corporation and Westlake Chemical Corporation, and Befar Group are key stakeholders in the trichloroethylene market space. Due to declining demand and increased legalizations, market players have remained conservative during the historical period.

Despite numerous legalizations, trichloroethylene is in demand in countries such as China, India, and the United States, owing to its high solvency and low cost. In order to meet the increasing demand from these regions, prominent players are offering a range of products for numerous applications. For instance, Olin Corporation and Westlake Chemical Corporation offer trichloroethylene for applications such as hydrofluorocarbon, metal cleaning, and vapor degreasing.

The coronavirus outbreak has brought the world to its knees, and forced people into lockdowns, which has affected the production and demand for trichloroethylene across the globe. Fear of coronavirus has forced countries to stop any kind of import-export across borders. Sudden industrial shutdowns and restricted transportation has crippled the global economy over the last few months. As per WHO and UN stats, loss caused due to the COVID-19 outbreak may take years to recover.

East Asia is the least affected region by the coronavirus outbreak and is poised to assist global market growth by the end of 2020. But, East Asia exports a huge amount of trichloroethylene to North America and other Asian countries, and halted import-export across borders due to the pandemic crisis may restrict market growth till the situation recovers.

Further, Europe and North America are the two prominent consumers of trichloroethylene, together accounting for significant demand in 2019. Along with leading trichloroethylene consumers, these are the most affected regions by the coronavirus outbreak, and account for nearly half of the global fatalities. The bad situation in these regions has impacted the growth of the global trichloroethylene market, which is poised to recover by the end of the year.

“In the midst of the COVID-19 pandemic, the global trichloroethylene market is poised to suffer a likely loss of US$ 25 Mn by the end of 2020”.

Trichloroethylene Market: About the Report

Fact.MR has segmented the trichloroethylene market on the basis of function, grade, application, and region.

“This Table of Contents prepared is confidential and intended exclusively for the individual or entity with whom it is being shared. Reading, disseminating, distributing, or copying this to any party other than addressee(s) is unauthorized and prohibited.”

China, India, and the United States are the key markets for Trichloroethylene Market

AGC Inc, Olin Corporation and Westlake Chemical Corporation are the key players in the Trichloroethylene Market

*111 figures and 70 tables includes by FactMR