When used for military purposes, fixed wing drones are most often useful for military defense and well-equipped with missiles to hit the intended targets when operated from great heights. Before beginning major construction and infrastructure projects, the construction industry is also more important for planning and design. As a result, designing maps and conducting surveys is crucial for gathering information about complex surface areas.

This requires prominent amount of time as well as man power to accomplish the mapping and surveying of such larger construction areas, whereas commercial UAVs can do this in seconds and also saves millions of dollars. Based on the above factors, fixed wing drone will generate valuation of US$ 7,085.1 million in 2023, growing at a CAGR of 17.2% over the forecast period.

From 2018 to 2022, the global market for fixed wing drone registered a CAGR of 15.4%. Fact.MR, a market research and competitive intelligence provider, reveals that the market will exhibit growth at 17.2% CAGR between 2023 and 2033. 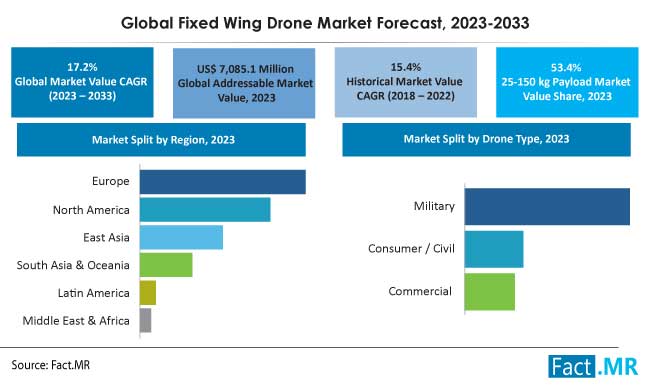 Market share analysis of fixed wing drone based on drone type and region is provided in the above image. Under the drone type segment, military sub-segment dominates with 68% market share in 2023.

Fixed wing drones can fly autonomously and gather data with little to no human involvement and without having people on board. Fixed wing drone use in defense operations has significantly increased globally. For instance, using target data gathered by fixed wing drones, the European missile group MBDA successfully hit a test target with a new anti-tank missile, the Missile Moyenne Portee (MMP), in January 2021.

The tank was detected and located using a French-made Novadem NX70 fixed wing drone, according to MBDA officials, which was operating outside the operator's line of sight. In addition, Turkish defense giant Aselsan successfully piloted its Saka ultra-compact unmanned aerial vehicle in May 2021 (UAV).

According to company representatives, the Saka system has a three-axis gimbal, weighs 600 grams, and is intended for aerial surveillance. Owing to aforementioned factors, the market share of fixed wing drones is expected to be little over 18% by 2032.

The use of fixed-wing drones in the consumer industry is for photography, product delivery, greenhouse gas emissions monitoring, and wildlife research and conservation applications. The use of drones also extends to the agriculture, real estate, mining, oil and gas industries. In the agricultural sector, the use of fixed-wing drones has led to the development of precision agriculture, allowing farmers to monitor crop health, monitor irrigation systems and identify different types of weeds.

Due to their superior durability and low operating costs, the increasing use of fixed-wing drones in civil and commercial applications has led to increased production, which is a major factor behind the growth of the market. Therefore, the global fixed-wing drone market growth is expected to increase in the assessment period.

What Do Fixed Wing Drone Manufacturers Need to Watch Out for?

Personnel operating fixed-wing drones must ensure the reliability of ground control stations and communication equipment. These drones can fly at various altitudes but require a pilot and qualified remote operators to fly and operate them. The number of pilots capable of such high-precision operations is relatively small.

The increasing adoption of drones in commercial, law enforcement, and government applications has increased the need for certified fixed-wing drones. Efforts are being made to increase the autonomy of the system and thereby reduce the involvement of human operators in order to reduce the number of accidents caused by poor operator control skills. Therefore, requirement of human resources skills may limit the expansion of market growth.

Why U.S. is Expected to Drive Fixed Wing Drone Demand?

North America has the largest market share due to high demand for fixed-wing drones for traffic surveillance, disaster management, law enforcement activities, and survey purposes. It is also widely used in commercial applications such as product delivery, surveying and mapping, inspection and monitoring. The United States is expected to generate 90% market share in 2023 in North America regions. Therefore, the U.S. fixed-wing drone market is expected to reach US$ 2,133.3 million by 2023.

China's drone industry has grown rapidly in recent years with the emergence of many companies producing drones for commercial, industrial and military purposes. The leading advanced technology, coupled with increasing domestic demand in various fields and government support policies, has strongly boosted the growth of China's drone industry, making it an attractive market for enterprises.

DJI, the world's largest drone maker, is making drones more popular in China. DJI has long been the world leader in drone manufacturing, holding more than 70% of the global drone market share. Therefore, China's fixed-wing drone market is expected to reach a valuation of US$ 800.6 million in 2023.

Why is Surveillance and Monitoring Application Leading in Fixed Wing Drone Market?

Fixed wing LiDAR drones are the first choice for inspection operations because they are equipped with advanced sensors and laser technology. The global navigation system helps in enabling end-users to obtain accurate, fast and consistent detection results. The increase in demand of for drones powered by artificial intelligence to detect and analyze the intensity of rig structure coating breakdown and corrosion on ships is driving the drone surveillance and monitoring market growth.

How Military in End Use Segment Creates Lucrative Opportunity for Market Growth?

Government spending on drones and other unmanned aerial vehicles is on the rise due to rising terrorist threats and security concerns around the world. Unmanned aerial vehicle solutions have a wide range of applications in the military and defense sector for effective asset and area surveillance to achieve optimal operational efficiency.

The UAV or drone can perform stealth operations, work at night, operate anywhere, and be used efficiently in a variety of operating conditions. Such advantages have prompted governments to invest more to procure and develop large numbers of UAVs around the world. This will subsequently lead to an increase in demand for military drones in the end use segment will have a market value of around US$ 4,817.9 million in 2023.

These top manufacturers of fixed wing drones are constantly developing innovative product designs to meet the modern challenges associated with component placement in harsh environments. Some prominent players have adopted competitive pricing strategies in the fixed wing drone market. The company has built constructive partnerships and collaborations with governments and end-user industries. High demand for modern drones and accessories allows market participants to expand their product range. Market participants are concentrating resources and capital on research and development while looking to expand their regional footprint.