This global ovarian cancer diagnostics market analysis by Fact.MR predicts the industry to expand at a robust CAGR of 7% from 2021 to 2031.

Fact.MR, a market research and competitive intelligence provider, has performed detailed analysis of the industry and researched all the factors that affect market growth. As per the study, the ovarian cancer diagnostics market amassed revenue worth US$ 1.3 Bn in 2020.

Increasing awareness, rising focus of government and other medical organizations to provide easy and in-time diagnosis of ovarian cancer are prime factors propelling the industry growth. The ovarian cancer diagnostics market growth to 2031 is estimated to rise at a CAGR of 7%.

What are the Different Types of Ovarian Cancer Diagnostic Imaging Techniques?

Imaging diagnostics play a vital role in ovarian cancer diagnosis and treatment as they allow professionals to explore the extent to which the tumors have spread. Some of the techniques are:

What Does the Survey Say About Different Cancer Tests?

Due to the prevalence of different types of cancers and different nature of tumors there are a wide array of tests that can be employed to detect cancer.

Which Establishments are Essential for Ovarian Cancer Diagnostics?

Various healthcare establishments utilize ovarian cancer diagnostics for treatments to research. The most prominent are testing laboratories associated with hospitals and research centers.

Which Regions are Lucrative Markets for Ovarian Cancer Diagnostics?

Demand for ovarian cancer diagnostics in APAC region is predicted to evolve at the fastest CAGR. The growth will majorly be driven by nations like India and China. The lack of awareness about the symptoms and treatments is a major factor that restricts the growth in APAC region. 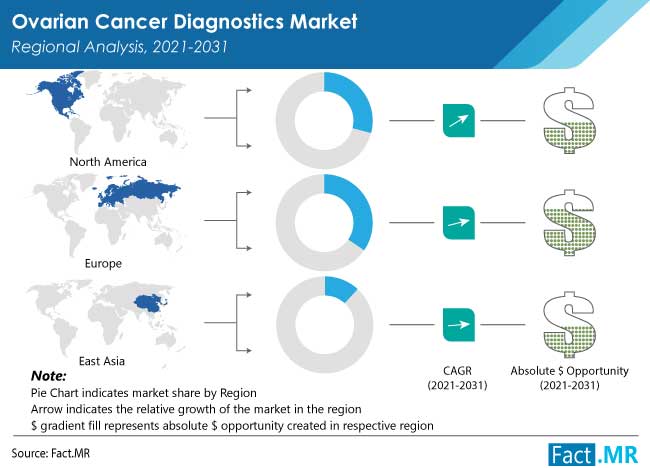 How is the U.S. Ovarian Cancer Diagnostics Market Expected to Perform over the Decade?

The U.S. is anticipated to hold a dominant market share in the North American region. The demand for ovarian cancer diagnostics in the U.S. is majorly fueled by the increasing geriatric population, rising awareness, and the presence of prominent players. Technological advancements and increasing investments in research initiatives backed by the government also play a vital role in the development of the ovarian cancer diagnostics industry in the U.S.

What are the Trends of Ovarian Cancer Diagnostics in China?

China is expected to see some major changes in ovarian cancer diagnostics industry as it is expected to be one of the countries in APAC region with the fastest CAGR.  While the nation has seen some decrease in cases over the past decade, the number of cases is anticipated to rise as the geriatric population increases over time. Government is placing control policies to curb the deaths and also backing research to promote ovarian cancer diagnostics.

How are Sales of KRAS Mutation Tests in Ovarian Cancer Diagnostics Shaping Up?

Research in developing new diagnostic tests and methods has increased substantially and researchers are coming up with new and advanced tests to diagnose tumors. Increased emphasis on genetic counseling is one of the major factors that is favoring the penetration of tests like KRAS mutation, HER 2, BRCA, etc. As research advances the penetration of these tests is expected to increase and the sales are anticipated to grow at a steady rate.

The global pandemic, which started in early 2020, has affected the world and has exposed critical loopholes in the worldwide healthcare infrastructure. The demand for bolstering the infrastructure and rectifying the loopholes is increased substantially as the pressure from people has risen. Governments are now taking initiatives to fund research and develop efficient and effective healthcare measures to ensure public safety.

A similar trend is expected to be followed in the case of ovarian cancer diagnostics as research for early-stage detection is gaining traction due to popular demand.

Latest innovations in ovarian cancer diagnostics are much needed in the industry to spot cancer in its initial stages and treat it at that stage without causing much damage to the internal organs of the affected person. Top manufacturers of ovarian cancer diagnosis instruments are investing in research and development of devices and instruments that would aid in the diagnosis and treatment more effectively and efficiently.

Increasing incidence of cancer in the general population and rising healthcare expenditure are major trends prevalent in the marketplace.

The research predicts the APAC market to exhibit the highest CAGR over the next ten years.

Use of ovarian cancer diagnostics at independent diagnostic centers is anticipated to experience high demand growth.

Demand for ovarian cancer diagnostics is predicted to surge at a CAGR of approximately 7% through 2031.

The global ovarian cancer diagnostics market amassed a net worth of approximately US$ 1.3 Bn in the year 2020.

Epithelial tumor diagnostics holds a dominant market share in the market as per cancer type.

*81 figures and 241 tables includes by FactMR