Drones are unmanned aerial vehicles or unmanned aircraft systems. This device is basically a robotic system that can be operated by a remote or also it can fly by the use of the software control processes. A small drone is a drone that is small is the size having size range upto 7-8 inches . They are generally lightweight and can be launched in the air by hand.

Countries all around the world were able to create advantageous rules for drones as well as their equipment due to the growing benefits of drone. Additionally, as more end-use verticals use drones, the drone industry as a whole is growing in several regions of the world. Sales of drone accessory kits are also set to rise as a result of small drone sales.

Over the long-term forecast period, the widespread use of small drones in logistics, agriculture, healthcare, commercial enterprises, and leisure purposes is expected to boost demand for small drones.

From 2018 to 2022, the global market for small drone registered a CAGR of 13.7%. Fact.MR, a market research and competitive intelligence provider, reveals that the market will exhibit growth at 16.3% CAGR between 2023 and 2033. 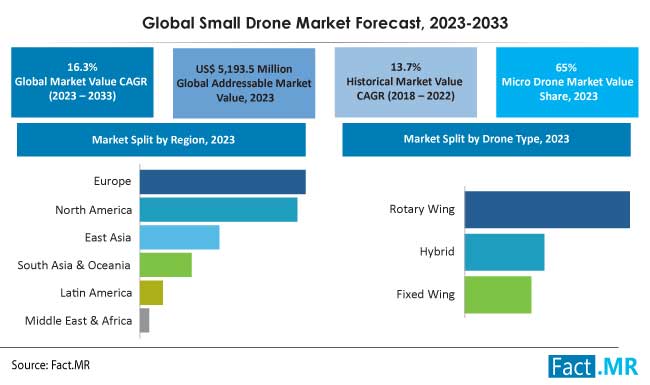 Market share analysis of small drone based on drone type and region is provided in the above image. Under the drone type segment, rotary wing sub-segment dominates with 53.7% market share in 2023.

The military drone accessories market is increasing rapidly owing to the rising security issues and geopolitical struggles between various nations around the world. Amid rising defense spending by various governments, small drone manufacturers are facing strong competition in the drone market.

Based on global analysis, world military spending grew annually by an average of 3% from US$ 1.7 trillion in 2015 to US$ 1.9 trillion in 2019. Moreover, the United States has the largest fleet of drones consisting of a variety of drones.

Major drone providers from Israel and China have increased the manufacturing and export of defense small drones for domestic and foreign militaries. This has resulted in increased demand for advanced and smart small drones across the globe.

The advancements in technology have always been a key factor that is being included in all domains. With the integration of research in drones, the introduction of LiDAR into small drones is now possible.

LiDAR stands for light detection and ranging. These are basically sensors that emit laser beams in the downward direction towards a particular surface and detect the reflected beams. This technology in drones will enable to capture of accurate images thereby implementing it for making 3D models.

As these LiDAR-based small drones enable them to map landscapes, they are widely used in the commercial and military sectors. Such technological advancements in the small drone will lead to the robust growth of the market.

What Do Small Drone Manufacturers Need to Watch Out?

Increasing protectionism by governments and the abuse of national security, leading to a threat to established trade rules that enabled drastic increases in global growth over the last seven decades can no longer be certain.

Drones comprise a wide range of products and are used in various end-use sectors such as delivery, logistics, construction, oil & gas, etc. This necessitates stringent standards according to end-use. Current government regulations lean to one of two extremes: “toughen up drone regulations” or “remove all restrictions”.

Basically, the drone system is a sophisticated technology. It requires many different components that need to be integrated with high accuracy and precision by the use of the latest technology. All these things rise the cost of the small drone. Drones are highly regulated and required to meet stringent standards of operation, including certification and statutory periodic renewals. All these factors may create a stumbling block in the growth of the market.

The growth of the drone business in the United States is receiving a sizable amount of investment. As a result, the small drone market in the USA will dominate during the anticipated timeframe. Operation-wise, the nation is very profitable. These little drones include different types of technologies that make them simple to use and increase their operational efficiency.

These factors will cause the market in the United States to grow at a CAGR of around 13.4%. Manufacturers of small drones may now offer drones at reasonable prices due to the rise in the number of manufacturers, which is helping to increase their presence in both domestic and international markets. The revenue generation from sales of small drones in United States is anticipated to reach US$ 1,424.8 million in 2023.

How Government Regulations in China to Benefit the Sales for Small Drone?

Although China's history of drone manufacturing began in the 1960s, rapid development has already made China one of the world's leading manufacturers. Government regulations and policies on innovation and technology are boosting the growth of the drone business, making Shenzhen the center of China's drone manufacturing.

Moreover, the Made in China 2025 strategic plan lists the drone industry as a key sector to further accelerate its growth. Drones support China's efforts to extend automation to various fields, greatly reducing time and resource consumption, and increasing productivity and efficiency. China small drone industry will grow at a CAGR of 15.6% during forecast period.

How Micro Drones Sales Will Lead to Market Growth?

Micro drones are small unmanned aerial vehicles (UAVs) weighing between 250 grams and 2 kg. Micro drones can be manually launched or vertically launched and require short runways or none at all. Micro drones have proven to be very useful in a variety of applications. Precision agriculture supports first responders and safely inspects critical infrastructure such as oil and gas pipelines.

Packed with technology, the micro drones has cost-effective advantages over other large UAVs. Based on the above factors, micro drone revenue is projected to reach US$ 3,398.1 million in 2023 capturing a market share of 65%.

The use of drones for commercial purposes has attracted a lot of press recently, with Amazon announcing plans to use drones to deliver packages to customers. This is a very interesting and transformative idea with many intended and unintended consequences. Rapid delivery of medicines, vaccines, and supplies directly to the source can prevent outbreaks of life-threatening epidemics.

In the future, small indoor drones could deliver medicines from pharmacies to patients' bedsides, saving some manual steps. This makes drug delivery faster and less error-prone. Nurses and pharmacists can work more efficiently because they can summon supplies to the bedside instead of the time-consuming task of gathering needed items.

Companies have established constructive partnerships and collaborations with governments and end-user industries. The high demand for modern drones and accessories allows market participants to expand their product range. Market players are focusing resources and capital on research and development while trying to expand their regional base.

The market is likely to reach a valuation of US$ 23,510.2 Million by the end of forecast period.

Logistics sub-segment sector will capture market share of 20.2% in 2023.

Europe region holds the leading market share of around 34.2% in 2023 and presumed to increase in same growth curve by the end of 2033.