Drones are typically part of nearly every unmanned aerial vehicle, also known as (UAVs), such devices serve a variety of roles, from military operations to cargo delivery. The drones have variety of range in size including micro, Nano and other huge drones. That is their size can differ from airplane to palm-sized drones.

Designed specifically for the military and aerospace industries, drones are gaining public attention due to their improved safety standards and effectiveness. These robotic unmanned aerial vehicles (UAVs) operate independently without a pilot on board.

A drone with a thermal imaging camera is called a thermal drone, which is currently used in various situations to measure heat loss, locate heat sources, etc. This is called aerial thermography and its main purpose is to find out where something is not working properly.

On 20 March 2022, firefighters responding to a devastating grassland fire in Cleburne, Texas used thermal drones to give a piece of apt information about the growing fire and provides situational awareness. Thermal drones can see through billowing thick smoke and enable to guide teams to safely reach and respond to the hotspots. Such advantages of thermal drones will provide a plethora opportunity to companies to manufacture thermal drones.

From 2018 to 2022, the global market for thermal drone registered a CAGR of 12.3%. Fact.MR, a market research and competitive intelligence provider, reveals that the market will exhibit growth at 13.1% CAGR between 2023 and 2033. 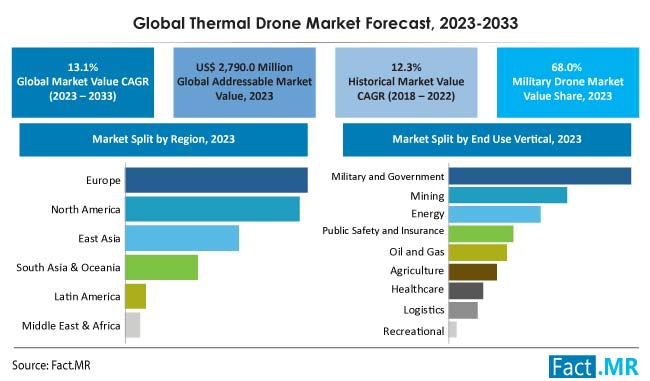 Traditional drones were almost exclusively used for recreational and media applications, with lots of constraints on their usage. Advanced drone equipment comes with extra accessories and makes the operation of drones livelier than before.

The adoption of next-generation technological accessories based on AI, VR, HUD (head-up display), and software’s with increased lifespans are becoming a strong trend in the market. Internet of Things (IoT) has certainly transformed manually operated technology into new and more advanced AI-based and software-based digitized technology.

New AI-based drone systems often come with automatic software-based control rather than manual control. Such new equipment has a lower risk of operational errors. Moreover, these new-generation products are trending not only in the commercial industry but also in the consumer and military industries.

“Surging Mining Industry to Propel the Market for Thermal Drones”

Mining operations are often carried out in areas with hazardous terrain. Drones are used in these hazardous areas to prevent human workers from being harmed. Underground mining, in particular, is fraught with great danger to workers. The material to be unearthed may be located in locations that are difficult to access.

Drone-mounted cameras can feed back images that can be safely analyzed from a distance. Drones can also be equipped with various cameras, such as thermal cameras and infrared cameras that can provide more detailed data than traditional cameras.

Drones can facilitate remote drilling technology that uses robots instead of humans to extract materials, avoiding exposure to hazardous terrain and conditions. According to certain reports, China tops mineral production followed by Australia and Russia. The thermal drone market is poised to garner an absolute dollar opportunity of US$ 7,130.4 million during the forecast period.

What Do Thermal Drone Manufacturers Need to Watch Out for?

Current obstacles to the widespread use of civilian drones is the regulatory environment. There is a lot of bureaucracy and rules vary from country to country. Regulation is still fairly limited in France and the US, two of the most promising markets for civilian drones.

Drone users must possess an unmanned aerial vehicle pilot license. Night flights are prohibited unless specifically permitted. Such regulatory limitations will be an obstacle to market growth.

How Germany’s Drone Industry to Support the Growth of Thermal Drone Market?

According to Germany's National Aviation Authority, it is legal to fly drones in Germany. However, as a member of the European Union, Germany must comply with European Aviation Safety Agency (EASA) drone regulations.

According to current statistics, about 90% of German drones are for personal use, only 10% are for commercial use, and the number of drones is expected to grow exponentially in the coming years. Germany is poised to grow at a healthy CAGR of 11.4% during forecast period.

Germany's success is largely due to the country having a majority of drones in the air, with approximately 430,700 drones that are driven by pilots. About 11% of these drones are commercial drones, which account for 87.8% of the country's total drone revenue. The rising drone industry in Germany will account for higher revenue generation from the thermal drone sector.

How the Support of Local Regulations Support Drone Market in the United States?

In the United States, the Federal Aviation Administration (FAA) regulates drones or unmanned aerial systems and establishes general rules for flying drones in the country. For example, in the United States, drones are licensed for recreational and commercial use, and there are regulations to detail the flying of recreational or professional drones.

According to the Federal Aviation Administration (FAA), the total number of drones registered in the United States includes 37.1% of commercial drones and the remaining 62.9% are recreational drones. United States thermal drone market is anticipated to obtain a valuation of US$ 734.2 million by 2023.

In U.S., drones must be registered with the FAA, and registrations are valid for three years. The law also governs how, when and where people can fly drones for recreational purposes. It is mandatory to follow all the existing FAA safety and model flight organization safety guidelines.

How Agriculture Industry Will Lead to Market Growth?

The benefits of drones in agriculture are well documented, but in addition to monitoring crops and crop health, drones equipped with thermal cameras can also track livestock. In flight, drones with thermal imaging capabilities are powerful tools for monitoring different types of wildlife.

Unmanned aerial vehicle (UAV) tracking and monitoring of livestock enable a wide range of activities that includes planning grazing distribution, assessing and responding to livestock behavior, and others.

UAVs can also measure important information such as weight, height, and monitor other activities by sensing the temperature of other insects that start growing on the crops. Drones allow farmers to easily check the safety of their herds any time. Drone operators can quickly check on animals to determine if they are missing or injured, and monitor pregnant animals. Agriculture thermal drone will capture a market share of 7.6% in 2023.

The ability to establish an online presence and sell products using e-commerce platforms is becoming more common. Popular brands have already started to have a presence on e-commerce platforms such as Amazon, DroneFly, and others. Sales of thermal drones are booming across all distribution channels due to their popularity. Sales through third party online channel that is the e-commerce channel will account for a market share of 35.8% in 2023.

Over the years, delays in regulatory approval in many countries have forced several industry players whose business models depend entirely on the approval of thermal drones to cease operations.

However, with countries now granting the necessary regulatory approvals to operate drones, companies may find it easier to enter and compete in the market. Market participants are focusing on their resources and investing capital on research and development. Moreover, they are trying to expand their footprint in the region.

The market is likely to reach a valuation of US$ 9,554.9 million by the end of forecast period.

The commercial drone sub-segment is likely to reach a valuation of around US$ 424.1 million in 2023.

Military and government type of end use vertical sector will hold the highest market share of 28.8% in 2023.

Europe region holds the leading market share of around 31.4% in 2023 and presumed to increase in same growth curve by the end of 2033.