The drone becomes more effective as a result of the numerous rotors' increased speed, performance, drift, and descent times. Octocopter have a greater capacity to carry and operate extra equipment for acquiring better visual data, making them an excellent choice for long-term aerial activities. The availability of quick-to-assemble components with higher carrying capacity and a variety of commercial and defense applications has contributed to the expansion of the world octocopter market.

The drone rotors on the octocopter each run independently, with their relative speeds adjusted to produce the thrust and torque necessary to lift the drone. In this configuration, the remaining rotors maintain stability when hovering in the air, even if one of the rotors is malfunctioning.

The market for octocopter drones has increased as a result of the inclusion of technologies that minimize mechanical losses and offer long-term stability in the air. Leading market participants are functioning vigorously and expanding their network and resources. extensive investments to strengthen their infrastructure with the goal of gaining a sizable market share.

From 2018 to 2022, the global market for octocopter drone registered a CAGR of 14.1% Fact.MR, a market research and competitive intelligence provider, reveals that the market will exhibit growth at 18.1% CAGR between 2023 and 2033. 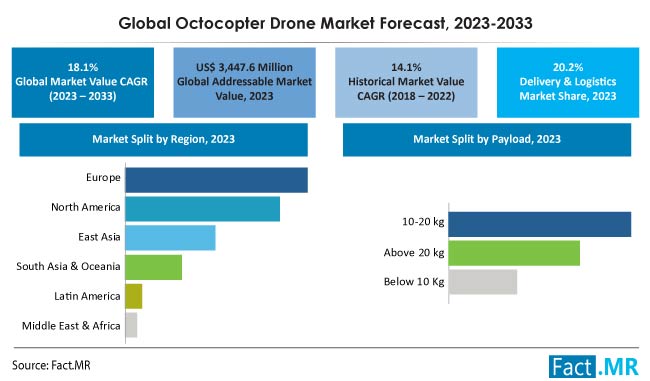 Furthermore, only a small number of drone manufacturers have already begun creating and introducing new drones that are simple to control in difficult circumstances. Octocopter drones are therefore anticipated to fuel growth during the predicted period.

Octocopter have the ability to take off and land vertically. The presence of this component increases the usage of octocopter for patrol, surveying, and surveillance in terrain that is geographically inaccessible. Due to restrictions on the use of fixed-wing and single-rotor drones, the use of octocopter is growing in the global defense industry.

The demand for airborne surveillance vehicles with lengthy hovering capabilities has increased due to a growth in construction operations in complicated sectors including shipbuilding, mountain bridge construction, and estuary dam development. Octocopter are becoming more popular as a result of rising demand for simple-to-control aircraft for commercial and geographic assessments. Consequently, it is anticipated that the global octocopter market for the construction sector will develop at a rate of of 18.1% until 2033.

What Do Octocopter Drone Manufacturer Need to Watch Out for?

Along with typical aviation aficionados, those who wish to work extra hours, experiment with aerial photography, and fly drones for pleasure are becoming more and more interested in octocopter drones. As consumers utilize drones more frequently to further their hobbies and interests, octocopter drone sales have dramatically expanded globally.

How octocopter drone market is skyrocketing in United States?

Moreover, United States Federal Aviation Administration (FAA) has also released new regulations that offer more comprehensive and consistent guidance regarding the safe and legal operation of unmanned aerial vehicles (UAVs) in commercial settings. These laws and rules are designed to make it easier to enter the market and promote product acceptance in the United States. Thus, United States octocopter market is expected to reach US$ 927.2 million by 2023 and expected to reach CAGR 15.1% in the forecast years.

Why is the China Octocopter Drone Market Expected to Be Highly Lucrative?

The majority of drones are produced in China. China, which has 1,800 drone producers at the beginning of 2021, dominates the military drone market. The employment of drones in many industrial sectors is being encouraged by the Chinese government, which is implementing a number of subsidy programs and other beneficial domestic policies. Demand for these unmanned aerial vehicles is rising in China as a result of the country's expanding drone applications (UAVs).

However, the growing need for drones for surveying, inspection, monitoring, and surveillance applications in the construction, agricultural, infrastructure, energy, telecommunications, mining, and insurance industries is what is fueling the nation's commercial drone boom. All these factors enable the growth of the Chinese octocopter market in the long term, creating a value of US$ 407.9 million between 2023 and 2033.

Why is the demand for 10-20 kg payload capacity is expected to surge the market?

Why is Market Growth Being Led by the Delivery & Logistics?

More than one-third of the worldwide delivery market's income came from the Asia-Pacific region in 2021, and that region is expected to maintain its dominance through 2031. According to the World Bank China has the growth potential of delivery and logistics market, china stands on 27th position in Logistics Performance Index. The delivery and logistics market segment is expected to reach the value US$ 695.7 million and market share of 20.2% by the end of 2023.

Market players are investing more capital and resources in R&D while trying to increase their regional presence. The business has established beneficial alliances and partnerships with end-user industries and governments. Modern drones and their attachments are in high demand, which enables market participants to broaden their product offerings. As octocopter offers higher stability and payload capacity as compared to other category, they are widely preferred by commercial end users.

Fact.MR has provided detailed information about the price points of key manufacturers of octocopter positioned across regions, sales growth, production capacity, and speculative technological expansion, in the recently published report.

Worldwide demand for octocopter drone is anticipated to reach US$ 18,197.8 million by 2033-end.