Target drones are drones that are frequently used for military system testing and development, combat training against manned and unmanned threats, and decoy demolition tests that mimic the behavior of actual threats. Therefore, targeted drones are utilized as a low-cost substitute for the equipment and vehicles that are used by the army of many nations.

A.M. Flying radio-controlled "air targets," which were utilized for the first time, paved the way for the development of drones used in the defense sector for a range of tasks such as target acquisition, target identification, aiming and deception, and combat training. Remotely operated target planes were employed to practice battleship gun targets in the 1920s and 1930s.

Since then, technology has developed novel goods and methods that have completely changed the defense business. Fully autonomous systems and hypersonic target drones that are challenging to track and lock onto targets are the newest advancements in target drone technology.

From 2018 to 2022, the global market for target drone registered a CAGR of 10.2%. Fact.MR, a market research and competitive intelligence provider, reveals that the market will exhibit growth at 15.7% CAGR between 2023 and 2033. 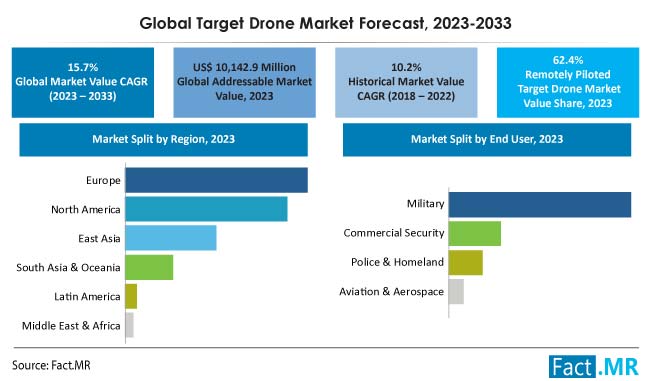 Market share analysis of target drone based on end user and region is provided in the above image. Under the end user segment, military sub-segment dominates with 64.2% market share in 2023.

“Introduction of technologically superior target drones to the drive the market growth.”

One of the key causes driving the deployment of target UAVs among air, ground, and naval forces around the world is the rising demand for targeting autonomously moving targets for military training exercises. Another significant factor encouraging the purchase of target drone technologies is the increased military spending in many nations.

Additionally, the military is increasingly looking for high-speed unmanned aerial targets for use in naval and aerial combat training. These elements are accelerating the expansion of the targeted drone market.

To meet the expanding market needs, certain vendors in the market are primarily concentrating on the development and introduction of supersonic target drones. In May 2019, QinetiQ introduced the first UAV supersonic target of its kind, which can be mounted to its high-speed target drone Banshee and launched while in flight.

The increase of territorial disputes around the world Wars and conflicts have been on the rise recently in many different countries all over the world. Afghanistan's recent political unrest in August 2021 plunged the nation into an ongoing state of turmoil.

It is anticipated that the increase in violent conflicts and terrorist acts in the country will have a negative impact on neighboring countries in the future. There are countless ongoing wars and minor conflicts in many different nations around the world right now.

Arms and ammunition are being purchased by nations all around the world to obstruct the admission of hostile troops and rein in anti-national behavior. Furthermore, a lot of people now carry guns for self-defense as a result of unfortunate incidents that occurred last year in nations like the France and U.S.

The most recent conflict between Russia and Ukraine in 2022, showed how drone assaults can be used to outperform traditional military hardware. This has encouraged the army to receive drone attack defense and drone-destruction training. During the projected period, these factors are anticipated to fuel the worldwide target drone market's expansion.

What Do Target Drone Manufacturers Need to Watch Out for?

Target drones don't have a pilot on board, so mistakes made while controlling them could have serious consequences. Target drones require specialized knowledge to operate and control because, in comparison to conventional target aircraft, as they rely more on autopilot, computer technology, and radio communication.

Target drones must be highly maneuverable during a real-life wartime environment, requiring skilled remote-operated personnel. Several drone clashes or accidents have occurred due to poor control of the operator. Efforts are now in progress to reduce such accidents by upgrading the autonomy of target drones and restricting the level of human-operator involvement. Various training programs are also in place to train, thereby reducing the chances of drone accidents.

How U.S Target Drone Market Will Grow Over the Assessment Period ?

Drones are a valuable tool for law enforcement agencies tasked with securing and monitoring large events such as public gatherings, sporting events, demonstrations, parades, and riots.

They act as the eyes, right up in the sky for police officers on the ground, and give them a much wider aerial field of view. All these factors will be driving the U.S. drone market thereby the target drone market will grow at a CAGR of 12.9% during the forecast period.

How Market for Target Drone is Estimated to Rise in China?

China has begun to demonstrate an increasing level of confidence in the production of drones and their application in warfare after a decade of extensive research and development. China has begun to deploy nuclear-armed submarines and modern combat carriers like the J-20 stealth fighter in relatively small numbers.

The Chinese air force is not just relying on cutting-edge drones. It is also making drones out of old fighter jets like the J-7. These conversions might have been used to break into other countries. China will grow at a CAGR of 15.2% and obtain a market value of US$ 1,072.7 million in 2023.

How Military Forces Using Drones Will Lead to Market Growth?

Military forces regularly behavior a more quantity of fight schooling and generation checking out sporting activities. It is one of the important motives at the back of the better adoption of target drone technology throughout the navy forces.

Several naval forces the world over are exceedingly focusing on the improvement and deployment of countermeasure technology for which they regularly behavior checking out and schooling sporting activities that entail a huge quantity of goal merchandise along with transferring aerial targets. Such times are propelling the adoption of target drones globally.

Defense equipment procurement costs are increasing worldwide. World military spending has grown exponentially in recent years. The target drones will capture a market share of 64.2% in 2023 due to the military sector.

Autonomous drones are well equipped by onboard technologically advanced computers that are usually remotely controlled by ground controllers. The aerodynamic structures of these drones are designed to serve multiple functions in the intended navigation system. This technology was basically introduced for risky military missions without endangering people's lives in multiple military applications.

Since the Second World War, numerous nations have made extensive use of the target drone technology and other goods. Target drones are increasingly being used in the defense and homeland security sectors.

The manufacturers should shift their focus in the designing of such target drones which will provide them with large opportunities for their growth.

The market is likely to reach a valuation of US$ 43,600.8 Million by the end of forecast period.

The rotary drone sub-segment is likely to reach a valuation of around US$ 5446.7 Million in 2023.

Europe region holds the leading market share of around 36.1% in 2023 and presumed to increase in same growth curve by the end of 2033.

Germany is expected to grow at a CAGR of 13.8% during the forecast period.