Micro drones are micro unmanned aerial vehicles (UAVs) weighing between 250 grams and 2 kg. Micro drones can be hand-launched or launched vertically, requiring short or no runways. Micro drones have proven very useful in a variety of applications. Precision agriculture supports first responders and safely inspects critical infrastructure such as oil and gas pipelines.

Government and private organizations, both military and commercial, are heavily involved in the production and development of efficient and sophisticated micro drones. Micro drones are loaded with technology and have cost-effective advantages over other large unmanned aerial vehicles. Based on the above factors, micro drone revenue is projected to reach US$ 3,398.1 million in 2023, growing at a CAGR of 16.8%.

From 2018 to 2022, the global market for micro drone registered a CAGR of 14.3%. Fact.MR, a market research and competitive intelligence provider, reveals that the market will exhibit growth at 16.8% CAGR between 2023 and 2033. 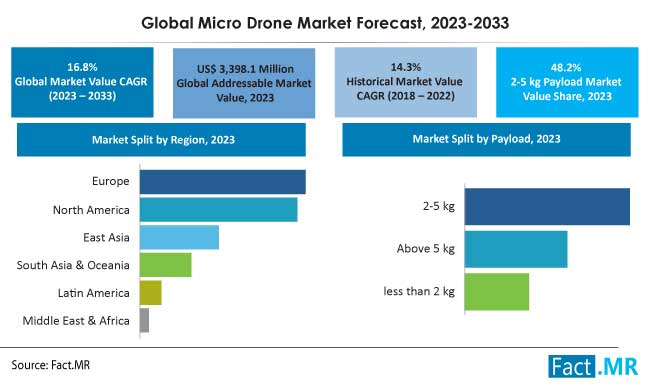 Market share analysis of micro drone based on payload and region is provided in the above image. Under the payload segment, 2-5 kg sub-segment dominates with 48.2% market share in 2023.

Micro drones can fly autonomously and gather data with little to no human involvement and without having people on board. Micro drone use in defense operations has significantly increased globally.

For instance, using target data gathered by micro drones, the European missile group MBDA successfully hit a test target with a new anti-tank missile, the Missile Moyenne Portee (MMP), in January 2021. The tank was detected and located using a French-made Novadem NX70 micro drone, according to MBDA officials, which was operating outside the operator's line of sight.

In addition, Turkish defense giant Aselsan successfully piloted its Saka ultra-compact unmanned aerial vehicle in May 2021. (UAV). According to company representatives, the Saka system has a three-axis gimbal, weighs 600 grams, and is intended for aerial surveillance.

Technological progress has always been a key factor affecting all end-use sectors. The integration of research into drones has enabled the introduction of LiDAR into micro drones. These are basically sensors that shine a laser beam onto a particular surface and detect the reflected beam. This technology of drones will allow us to capture accurate images and implement them in the creation of 3D models.

These LiDAR-based mini drones can map landscapes and are widely used in commercial and military fields. Technological advancements in such micro drones will lead to robust growth of the market. Thus, the market growth for global micro drone is expected to increase at a CAGR of 16.8% in 2033.

What Do Micro Drone Manufacturers Need to Watch Out for?

Due to the increasing use of micro drones in civilian applications, governments of developed countries are drafting laws and regulations regarding the use of these unmanned aerial vehicles to protect important national, historical or natural areas. Micro-drone technology is evolving so rapidly that policy makers can't keep up.

Additionally, different countries have complex airspace regulations regarding micro drones. Many countries accept the use of drones, especially recreational use, as not strictly regulated but must be monitored for safety reasons. There are very strict laws and regulations against their use, and pilots must ensure that all correct procedures are followed before flying.

Strict drone regulations in various countries are expected to limit the growth of the micro drone market during the forecast period. As a result, this may hinder market expansion.

Why U.S. is Expected to Drive Micro Drone Demand?

Increasing drone business in the United States requires a large investment. As a result, the US micro drone market will dominate for the expected period of time. Operationally, the country is very favorable. These micro drones incorporate various technologies that make them easy to use and increase operational efficiency.

It will help more and more micro drone manufacturers to make their drones affordable and increase their presence in domestic and international markets. The United States value is expected to reach US$ 932.27 million in 2023.

Why Chinese Micro Drone Market Expected to Be Highly Lucrative?

Chinese drone industry is booming. The country is her second largest drone market in the world and is expected to overtake the lead market, the United States, in 2024. With the total market value of China's drone industry projected to exceed her 180 billion yuan in 2025, the sector is declining as a profitable business.

Drones support China's efforts to extend automation to various fields, greatly reducing time and resource consumption, and increasing productivity and efficiency. China, in particular, is increasingly using drones to expand its next-generation logistics network, due to its high population density. Therefore, the Chinese micro drone market is expected to reach a valuation of US$ 337.87 million in 2023.

Why is Commercial Drone Type a Popular Segment in Micro Drone Market?

Commercial use of drones has expanded to include on-demand deliveries, high-altitude mapping, and search and rescue operations. Unlike large delivery vehicles that require a lot of energy to operate, drones can be easily controlled with a remote control and consume much less energy. In addition to the use of commercial drones for rescue operations and disaster reporting, the commercial drone market is booming.

Owing to the above facts, the commercial drone type sub-segment of the micro drone market is expected to reach valuation of US$ 516.5 million by the end of 2032.

How Precision Agriculture is Poised to Drive Micro Drone Market?

The use of agricultural drones can track crop and soil data, plant seeds, control crops, and perform a variety of other tasks that ultimately improve productivity by making effective use of soil, water, and fertilizer. Different types of agricultural drones can also determine the general health of crops and plants, the distribution of land, the lifecycle of crops, and other factors, thereby maximizing yield and identifying crop planting locations.

In order to reduce poverty and feed the growing population of the world, which is expected to reach 9.7 billion people by the year 2050, agricultural improvement is one of the most important and effective strategies. As a result, there would be an increase in demand for precision agriculture, which is expected to have a market value of about to be around US$ 483.5 million in 2023.

These top manufacturers of micro drones are constantly developing innovative product designs to meet the modern challenges associated with component placement in harsh environments. Some prominent players have adopted competitive pricing strategies in the micro drone market. The company has built constructive partnerships and collaborations with governments and end-user industries.