From 2016 to 2020, sales of rhizoma gastrodiae tablets were significantly high, expanding at under 10% CAGR. Increasing preference for traditional and alternative medicine over conventional allopathic ones amid rising health concerns has been driving majority of market growth.

The COVID-19 pandemic has promised significant future expansion prospects, as key healthcare providers seek to incorporate natural alternatives to reduce inflammation episodes. From 2021 to 2031, demand is likely expand at a CAGR exceeding 10% as key regions incorporate plant-based medicine to address such key problems as liver diseases.

Worldwide annual market for these products is currently valued at US$ 60 billion, and it is anticipated that traditional herbal medicine will make significant strides in the global market, with countries such as China, India, Nigeria and the U.S expected to make significant strides, eventually heightening prospects for rhizoma gastrodiae tablets.

Liver disease accounts for approximately 2 million deaths annually worldwide, half of them due to complications arising out of cirrhosis and the balance as a result of viral hepatitis and hepatocellular carcinoma, according to the National Center for Biotechnology Information.

Moreover, about 2 billion people consume alcohol worldwide and upwards of 75 million are diagnosed with alcohol-use disorders and are at risk of alcohol-associated liver disease. In addition, a significant chunk of the population also lives with fatty liver. Hence, rhizoma gastrodiae tablets are likely to prove useful in mitigating these diseases, inclining their demand.

What are the Key Challenges to Market Expansion for Manufacturers of Rhizoma Gastrodiae Tablets?

A major challenge expected to hamper sales of rhizoma gastrodiae tablets is the limited presence of adequate manufacturers. Currently, bulk of all products manufacturing is restricted to China, attributed to the presence of regional level players.

However, certain players are attempting to expand their business in overseas markets in order to expand their geographical footprint, widening expansion prospects. Another challenge is that of regulatory approvals. Due to availability of limited literature, key authorities are unable to ascertain their effectiveness, delaying product launches. 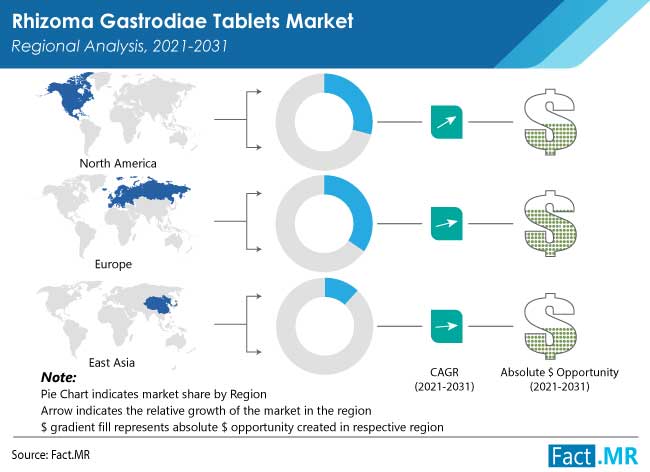 How is Growing Popularity of Alternative Medicine Bolstering Rhizoma Gastrodiae Tablet Sales in the U.S.?

The market for rhizoma gastrodiae tablets in the U.S is likely to expand at under 5% CAGR until 2031. Increasing preference for herbal medicines over conventional ones is largely attributed as the chief growth driver for the region.

According to the American Botanical Council, sales of herbal products exceeded US$ 5.3 billion as of the beginning of the previous decade, climbing by 8% to reach around US$ 6 billion by 2013. It further rose to over US$ 9 billion in 2019. Hence, prospects for these medicines appear highly bright across the U.S

Why is Demand for Rhizoma Gastrodiae Tablets High in China?

China is expected to remain the epicenter for global rhizoma gastrodiae tablets, generating more than 50% of the revenue share across the forecast period. Extensive development of Traditional Chinese Medicine (TCM) underpins majority of the East Asian giant’s market growth prospects.

A plethora of chronic ailments have been addressed in China by virtue of traditional herbal-based medicine. As per the World Health Organization (W.H.O), TCM accounts for around 40% of all healthcare delivered. Hence, a number of regional level manufacturers have emerged across key provinces.

How are Growth Prospects for Rhizoma Gastrodiae Tablets Surging in India?

India is poised to exhibit a robust 9% CAGR with respect to rhizoma gastrodiae tablets sales in forthcoming years. The Indian Journal of Pharmacology estimates that 60% of registered physicians are involved in traditional and alternate systems of medicine in India.

By type, demand for gastrodia elata f. glauca rhizoma gastrodiae tablets is likely to witness an impressive incline, at a staggering 10% CAGR until 2031. These tablets have proven highly effective in addressing a variety of ailments.

The rhizoma gastrodiae tablets landscape appears highly consolidated, with a major chunk of it being dominated by Chinese players. Some notable developments in the market include:

*This list is indicative- full details about prominent rhizoma gastrodiae tablets manufacturers is available upon request.

Demand for rhizoma gastrodiae tablets is anticipated to witness a considerable incline from 2021 to 2031 and expand at a CAGR exceeding 10%. Extensive uptake to treat chronic ailments such as liver disorders will greatly

China is likely to emerge as the center-stage for enhanced sales of rhizoma gastrodiae tablets, expected to generate over 50% of total revenue from 2021 to 2031. Simultaneously, India is anticipated to experience a surge of 9% CAGR across the afor

Demand for gastrodia elata f. glauca rhizoma gastrodiae tablets to surge at a staggering 10% CAGR over the next ten years.