The demand for vibratory rammers has increased significantly in the past few years, and the trend is likely to continue over the forecast period. The growing demand for road and highway maintenance along with growing infrastructure across the globe have created sufficient growth opportunities for vibratory rammer market players.

Incessant rise in the road traffic will require continuous improvement and construction of roads, in both rural and urban areas, thereby potentially raising the demand for vibratory rammers.

Apart from the conventional and favorable option of petrol and diesel units, the vibratory rammer market players have innovated and introduced battery operated rammers, considering an increased awareness among consumers with regard to pollution and depletion of fuel.

Growing government concerns for carbon emitting vehicles and machineries, and imposition of stringent regulations to reduce carbon emissions have further boosted the sales of battery vibratory rammers. The higher demand for battery units is due to their multiple benefits such as, 100% emission free and noiseless operation.

With growing infrastructure, the demand for roads and highways maintenance has increased more than the expected rate. The vibratory rammers are mostly used by contractors for road patch work, due to higher application along with lower price, thus eventually bolstering the vibratory rammer market.

Growing construction activities particularly in the emerging economies has a positive impact on the global market. The vibratory rammers are small and compact in size and are easy to handle compared to other equipment in the construction industry.

Due to ease of handling, the transportation of vibratory rammer becomes easier, so the rental services owner is preferring vibratory rammers, which has increased the market share of vibratory rammers in the global market. The rammer has an additional advantage due to its small and compact size and is well suited for small jobs. For large road work, the vibratory rammers behave as perfect partner to large compaction machines which are not able to get into every corner. 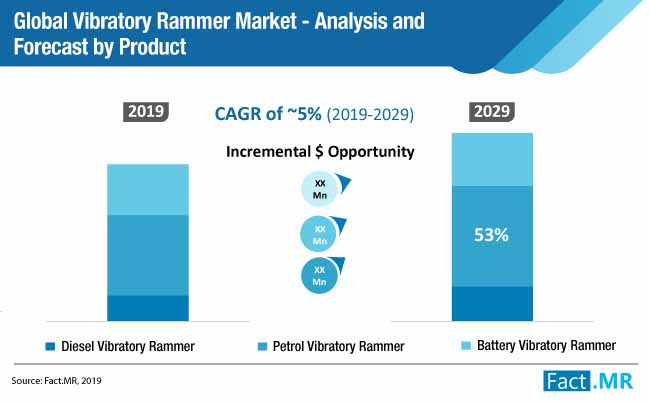 The vibratory rammer has number of advantages; it is efficient and uses a simple method for compacting the soils. It saves a huge amount of time and effort against the traditional way. Soil compaction plays an essential part of the construction process.

The soil compaction is projected to be the leading sector for vibratory rammer market, followed by asphalt compaction. The adoption of vibratory rammer is picking up pace in large, as well as small scale road constructions, which will eventually increase its demand in the coming years. The vibratory rammer saves time and decreases the labor cost, thereby gaining increasing momentum in pavement repairing.

The construction industry in Europe is growing with an annual growth rate of more than 2%. Europe is the key region for vibratory rammer market. The European market for vibratory rammers is estimated to grow at a significant CAGR of ~ 4.5% and will represent a total incremental opportunity of ~ US$ 56 Mn during the forecast period.

The initiative for greener buildings will also propel the growth of the European construction sector. France and the United Kingdom are considered to be the major markets for vibratory rammers, with more than 40% of share held by these two countries in the European Market. In North America, the U.S. vibratory rammer market is expected to grow at a CAGR of around 5% by value over the forecast period.

The vibratory rammer market in East Asia continues to witness a significant growth, in the view rapidly expanding construction industry. The demand for vibratory rammers, particularly in Japan, is rising at a vigorous pace due to the increasing infrastructure activities in the country.

Manufacturers are further tapping into opportunities in developing countries including China, India, and South Korea. Moreover, China spent a significant amount on infrastructure and road construction from the total GDP Contribution.

Growing sales of vibratory rammers through different distribution channels has created significant variations in price, resulting in an increase in the competition among the market players. This would make way for the manufacturers to introduce and deliver more cost efficient, technologically advanced and newer generation vibratory rammers during the forecast period. 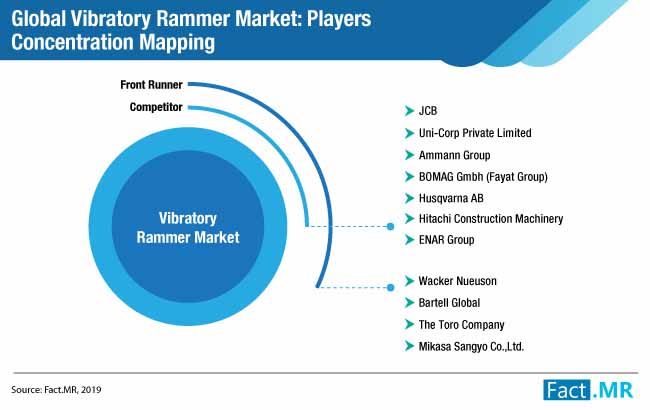 To expand the companies’ product portfolio and strengthen their position as technology leaders in market investment, research and development activities are a key strategy implemented by the market players. One of the prominent market players, Wacker Neuson captures more than 20% share of vibratory rammer market and offers the vibratory rammer product under three different categories namely battery, petrol and diesel rammers.

Depending on engine type, the diesel and petrol rammers are further subdivided in two different categories as 2 stroke and 4 stroke rammers respectively. Furthermore, in order to offer 100% emission free operation, the company had manufactured battery operated vibratory rammers.

Wacker Neuson Group continues its international expansion into Far East by building close alliances with local partners that have leading market position and cross regional networks. In 2018, the Wacker Neuson Group opened up a production plant and R&D center in Pinghu near Shanghai, China. Further, a prominent player Bartell Global has formed an alliance with six premium brands that have rich histories in construction industries. These premium brands are leaders in developing innovative industry products which indirectly helps strengthen the company’s position in the market. Intense focus on innovation and quality in products along with customer service and marketing will remain keys to gaining distinct competitive edge.

Similarly, in 2017, to expand company’s position in the market, the FAYAT group had announced that they have completed the acquisition of DYNAPAC. The agreement consists of production units in Sweden, Germany, Brazil and China countries, a production partnership in India, and sales and services in 37 countries.

The global market for vibratory rammers is estimated to grow at significant rate over the forecast period, while market contenders are rising in competition with existing players. The manufacturers in vibratory rammer market are expected to expand their business portfolio with strategic developments, such as enhancing service offerings, developing more products in battery operated units, expansion, collaborations and partnerships, and acquisitions and mergers in the vibratory rammer market.

By using their experience and putting a lot of investment in research and development activities to meet the diverse needs of the customers across the globe the key market players have launched extensive and diversified product line under their various brands.

The market players are looking to develop high quality products and to gain the customer satisfaction they are devoting a lot of attention towards customer reaction over their previous offerings and making changes accordingly.

The try-hard approach of market leaders for greater operational excellence and further improvements in the quality of products and services across all lines of business plays an important role to drive the market.

What is the CAGR for Vibratory Rammer Market?

What is the Vibratory Rammer Market size?