Diquat is a chemical used as a herbicide that has applications in managing aquatic or marine weeds in public water bodies such as lakes, rivers, ponds, marshes, bayous, reservoirs, canals, drainage ditches, streams, and other slow-moving or quiescent bodies of water.

Historic and Future Pathway Analysis for the Diquat Market

Diquat is a herbicide and is also used as a desiccant. Diquat gaining traction across water treatment plants due to its herbicide properties checking aquatic weed growth and supporting aquatic biome. Further, the growing vegan population supports agricultural growth especially across India and china, owing to this, the efforts towards improving the overall agricultural production capacity bolster the consumption of diquat in the APAC region.

Diquat is spread over the weeds and needs to be removed, as diquat inhibits the growth of the part it comes in contact with. Thus, the use of diquat does not affect whole cultivation. The aforementioned factors are augmenting the market's growth.

According to the Fact.MR, a market research and competitive intelligence provider, the market is projected to exhibit growth at 4.6% CAGR between 2023 and 2033. 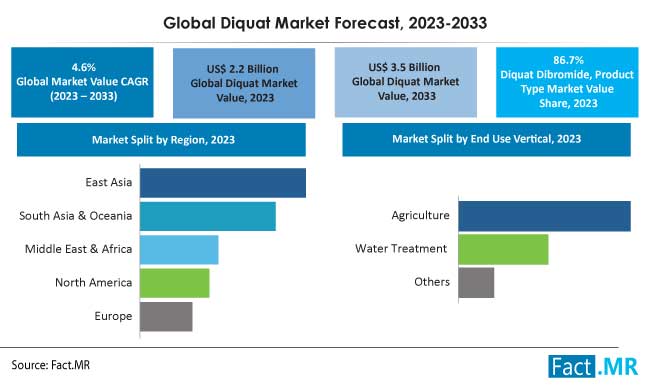 Market share analysis of diquat based on product type and region is provided in a nutshell in the above image. Under the product type segment, the diquat dibromide sub-segment dominates with an 86.7% market share in 2023.

With the growing veganism, there is a huge demand for plant-based products such as milk, chocolate, food, leather, and others. In order to, meet the surging demand for vegan solutions, market players are investing in R&D and developing vegan products. For instance, Nestle's pea-based milk and Hershey's vegan chocolate bars are made with a base of oat milk. Hence, veganism is gaining traction. About 79.0 million people are vegan across the globe in 2021 and are estimated that the vegan population will multiply during the forecast period.

India and China are among the major economies with high population and prominent agriculture industry growth opportunities. Hence, the demand for the diquat is anticipated to increase across APAC in forthcoming years.

Diquat act as a powerful herbicide that eliminates weed growth and enhances the output of overall agricultural production. Further, diquat is also used as a plant desiccant, which improves crop uniformity, desiccates weeds and green tissue, and increases harvest efficiency. The aforementioned factors positively influence the demand for the diquat market.

Diquat is ineffective on perennials, hardy grasses, or some very well-established weeds. It may affect the growth of the perennials but are inefficient to kill them. Further, diquat is a mildly toxic substance to mammals when ingested and is irritating to the skin, eyes, and respiratory system. After consumption, it enters the body rapidly and damages multiple organs' cellular structures.

Although it doesn't have any known carcinogenic components, it may have an impact on the stomach, intestines, liver, and kidneys. On the back of the aforementioned facts, diquat use is banned in European Union. This, in turn, hampers the diquat consumption and market growth.

Also, the presence of glyphosate challenges the market's growth over the forecast period. As glyphosate is safer as compared to diquat. It functions by inhibiting the plant enzyme EPSP, which is necessary for the synthesis of amino acids in plants. EPSP is absent in mammals, this indicates that it isn't toxic to both humans and animals.

It is difficult for glyphosate to enter groundwater systems as it adheres firmly to soil particles and is eventually broken down by soil bacteria. Consequently, have higher adoption rates than diquat, which is limiting the expansion of the diquat market.

What are the Factors Driving Diquat Demand Across the US?

Growing vertical farming across the US, the demand for the diquat increases to eliminate the growth of the weed in the unattended plants in upper sections. Over the period, with the growing population and rising demand for food in inefficient land, vertical farming is a solution to such problems as it requires vertical spaces and improves overall output.

Such farming takes place in a controlled and required environment, thus, has fewer chances of production loss. This, in turn, creates high growth opportunities for the diquat market.

Why is the China Diquat Market Expected to Be Highly Lucrative?

China is a nation with abundant agricultural resources and a sizable rural population, in addition to a long history of farming and practice of intensive cultivation, which makes China is leading country in agriculture and creates lucrative opportunities for the sales growth of diquat.

Further, the advancement of agriculture has always been a top priority for the Chinese government. Since 1978, China has implemented a policy of gradual reform and opening up, hastening the development and reform of agriculture.

Hence, with the flourishing agricultural sector China also witnesses weed issues, and in order to overcome that use of diquat is increasing. Additionally, the presence of major market players in China offers immense growth opportunities to the market.

Why is Liquid Dominating the Market?

Based on the form, the segment is bifurcated into liquid and crystalline. The liquid is easy to spray and does not require additional efforts of mixing and preparing a solution, thus, limiting human contact. It is available in a variety of packaging ready-to-use. Spraying liquid ease the work and covers a wide area as compared to powder. Such factors drive the liquid form growth.

Will Market Growth Be Led by the Agriculture End-use?

The diquat is used to clean wastewater from duckweeds and related plants or weeds, which pollute the water body or absorb dissolved oxygen negatively affecting the aquatic biome. Further, diquat has a huge adoption across emerging economies as an effective chemical in wastewater treatment.

Public and private institutions have ambitious plans to create extensive water and wastewater treatment and distribution infrastructure in order to meet these challenges. In India, there is an increase in demand for sophisticated water treatment methods.

Hence, the huge investment in wastewater treatment across India bolsters the demand for the diquat to overcome the challenge of removing aquatic weeds.

Fact.MR has provided detailed information about the price points of key manufacturers of diquat positioned across regions, sales growth, production capacity, and speculative technological expansion, in the recently published report.